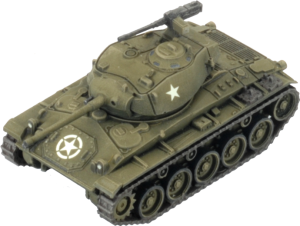 I do love me a light tank, and the M24 Chafee is in my opinion the best light tank of WW2, and also in Flames of War. It is fast, deadly and a blast to play! Playing against them, I can’t tell you how frustrating it is to try to pin down a few of these units if played well!

It was built as a replacement for the M5 Stuart, and in terms of firepower and speed, it is definitely a success, it also has a .50 cal machine gun on a pintle mount, for anti-aircraft and close defence.  The 75mm gun on the Chaffee was a new lightweight design, which was a derivative of the 75mm gun used on the B-25H Mitchell bomber, it had the same ballistics as the 75mm M3 gun on the Sherman, but utilised a more thinly walled barrel and a more compact recoil mechanism, that allowed it to fir in the more compact Chaffee turret. It does have a slightly higher profile, so harder to hide behind foliage, but overall a much better tank that the M5 Stuart, and much liked by the crews. 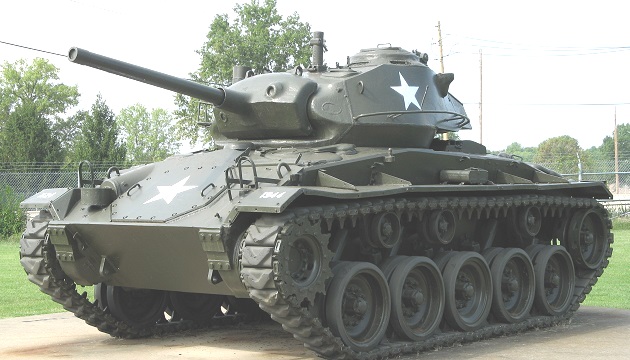 Crews liked the improved off-road performance, and reliability, but most of all the 75mm gun, which was a significant upgrade from the 37mm gun on the M5 Stuart and allowed the crews a chance to fight back against superior German Tanks if they were forced to, and was also good for infantry support and blasting out anti-tank guns. But it should be noted, that by this time of the war its armour could only really protect it from small arms, and any German anti-tank gun, tank or hand-held anti-tank weapon would easily penetrate it. So they were still relying on their speed and skill to stay alive. 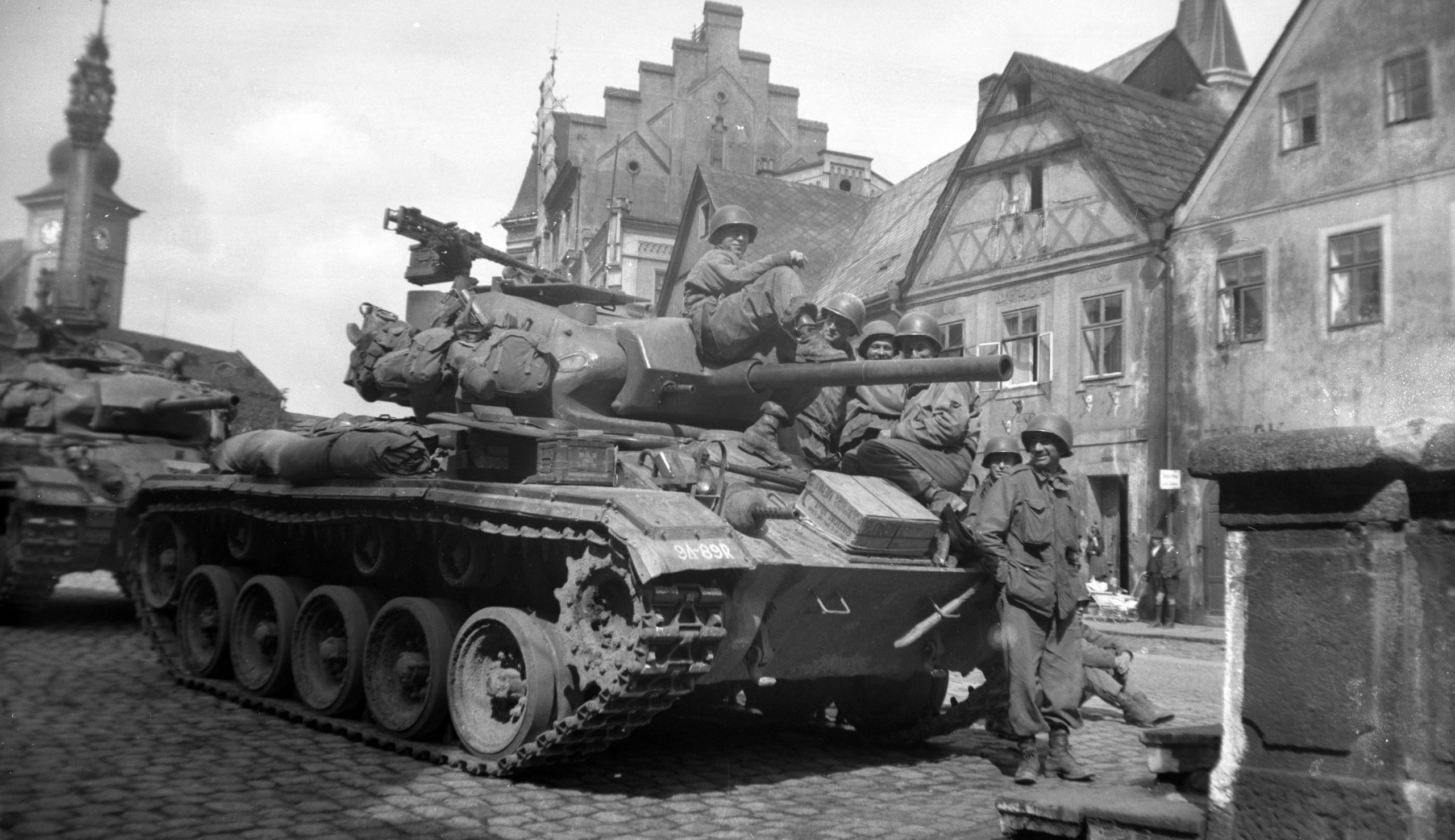 That speed was one of the main advantages of the Chaffee, and it got that speed from a twin V8 Cadillac motor that allowed it to get up to 56 km/h (36 mph) on roads, it was also half the weight of the M4 Sherman at 20 tonnes. Also it had excellent off-road performance, from its torsion bar suspension and 16-inch wide tracks, that gave it excellent ground pressure and traction to the Chaffee over soft ground. Combining that speed, gun and off-road performance make the Chaffee a great scout vehicle, if you then give that tank to experienced US Cavalry crew, you get a very potent scout tank indeed.

A US force to ‘accidentally’ be one of the first units to use the Chaffee in combat was the 740th Tank Battalion. Before the Ardenne Offensive they had been trialling tanks as part of the secret CDL Project (Canal Defence Light) – where tanks were mounted with large high powered searchlights, to illuminate the battlefield and blind the enemy. This project had been abandoned and the unit was in the process of returning to a normal tank battalion at the First Army Ordnance Depot at Aywaille, Belgium when the German offensive began. A tanker recalls on the 18th of December ‘things were getting bad in the breakthrough, and rapidly getting worse! A good many outfits had been completely overrun and Von Rundstedt was gaining momentum rapidly. ’. They were immediately tasked with moving towards the German spearhead and to help in the defence, but the 740th Battalion commander had to explain they had no tanks, only 3 Shermans were available to them and working at that time….  the Depot commander then issued orders for the nearby Ordnance Vehicle Park to issue the tankers with ‘anything the men could drive or shoot!’, so they quickly went to see what they could commandeer and repair.

They found only 24 Sherman tanks in the depot all in disrepair, and only 15 Shermans could be made operable by robbing parts from the others, also none had full ammo loads. They worked all night in getting them fit for battle, some vehicles did not even have radios, so they had to rely on hand signals for communications in combat later. They also got an assortment of Tank Destroyers (one M36 and some M10s), M8 Scott Assault guns and M7 Priests for the Assault gun platoon, seven M5 Stuarts and two M24 Chaffee’s that had been sent to the depot by accident. 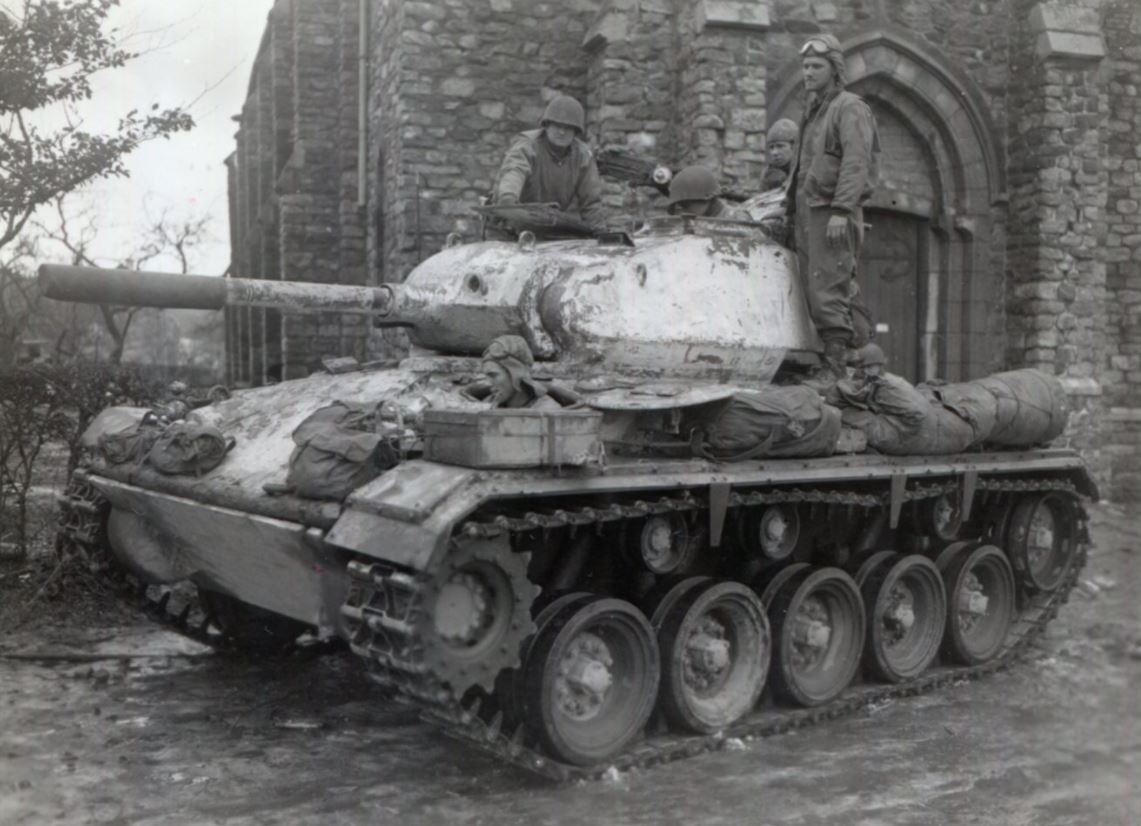 The next day they moved out to help the beleaguered 119th Infantry Regiment at Stoumont, which had already lost one battalion and the other two were at half strength. The Battalion eventually took out three Panthers and stalled the German attack there, although there are no first-hand accounts of the Chaffee’s exploits there, this does seem to be one of the first times they were taken into combat, and just goes to show how surprised the allies were by the German push through the Ardenne.

Although they were a great new addition to the Allied arsenal, and widespread use started in December 1944, supply never kept up with demand, and many armoured divisions were still using mostly the older M3/M5 Stuarts, and some Armoured Divisions did not receive their Chaffee’s until after the wars end. Chaffee’s were even supplied to the British under the lend lease program with the famous 7th Armoured Division (Red Rats) reconnaissance squadrons being the first to receive them, later in the war the British 11th Armoured Division also used them in concert with the new British Comet tank, their excellent speed complimenting each other.

Overall the Chaffee was an excellent scout and light tank, and many countries used these vehicles well into the 60’s and 70’s, and the last country to use them was Uruguay used an upgraded variant from 1958 to 2019 with an impressive 61 years of service.

Well that is enough about the history of the Chaffee, let’s look at how it handles in game. The Chaffee has a front armour of 4, an upgrade on the 3 of the M5 Stuart, and the Tactical and Terrain Dash is the same, an exceptional 12” and 14” respectively. The Stuart still does have a slightly faster cross country dash of 24” compared to the 20” of the Chaffee, but it is still very fast, and the better gun and armour more than makes up for that. The Road Dash and Cross checks are the same, 28” and 3+ for both.

The stand out improvement is the 75mm main gun, with a range of 28”, AT 10 and 3+ firepower, this is significantly better than the old 37mm gun mounted on the M5 Stuart, and gives you a fair chance of knocking out Panzer IVs frontally and Panthers from the Flank, you may even be able to knock out a Tiger I with a lucky side shot.

The regular Chaffee’s are cheaper, and have the standard LW US Blood’ n Guts rule which gives an improved Last Stand of 3+, but pay for this with a To Hit of 3+ and a poorer Skill check value of 4+. So are less likely to pass the Blitz check they would need to make the most of their excellent mobility and great gun, and more likely to get hit, so need to make best use of range and concealment until they are ready to close in.

One thing to be conscious of for both the Veteran and Regular Chaffee units is that they do not have Scout or Spearhead rules, they are a light tank in game and not a true scout tank. So you will need to remember to bring a few of those scout units to make the most out of their mobility and the spearhead rule.

In fact sometimes it is better to not even present a target at all until it is to your benefit, rather than take losses in try to pull off unlikely kills at range. You still have the Stabilizer rule, which increases your ROF to 2 whilst moving, but adds +1 To Hit modifier to your rolls, but it does seem the doctrine of firing more projectiles in the air means more chances to hit is operating here…..

I still think it is better to fire from long range, and concealment is the best option if available, and using Blitz to get a ROF of 2 without a negative modifier is best. Unless its a Hail Mary, the stabilised firing is probably best used at close ranges and if you can get the flank or rear of the target, otherwise you may be unlikely to hit anything.

The best targets for the Chaffee are the support units, the half tracks, self propelled artillery, the AA vehicles, and other recon and scout units, if you can have the Chaffees out marauding through these, it allows your real tank killers to focus on the tanks, and not be tempted to take the easy kills and wasting their high AT shots. Only after you have got rid of those should you try to help taking out the big cats.

The Caffee can be great either as a full formation of them or as a support to your main formation, but try to remember they don’t have the armour to take much fire in return, and pretty much any German anti-tank weapon will punch holes in it… so use it more like you would a German Puma, take your opportunities while you can, but avoid return fire, as they will likely turn into piles of scrap.

The most fun I think would be the Veteran Chaffe Company, using your high skill to blitz and scoot and shoot, making the most of your mobility, gun and skills, but if you enjoy a challenge and want to play in expert mode, use the regular Chaffee Company, the trade off is you can take more toys with the cheaper regular formation, you just have to last long enough to make use of them. 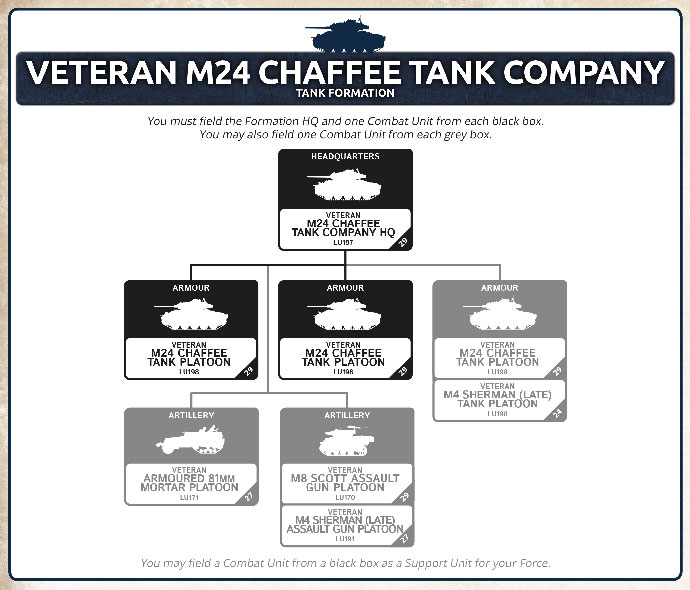 I have put together a force with the Veteran Company, making sure to take all the Formation units I could. The Veteran 81mm Mortars and M8 Scott Assault guns will be good for providing smoke and also pinning or taking out enemy anti-tank weapons, support weapons and artillery. I have 10 Chaffees in total, and three Shermans (including a Jumbo) to give me 76mm AT 12 firepower, they will occupy the enemy tanks from the front while the Chaffees work around the flanks. I have 3x M7 Priests to dig out any stubborn infantry, and a battleweary armoured rifle platoon to either hold one of my objectives or push forward and take an objective after it has been softened up.

Rounding it out with a Greyhound and Stuart Cav Recon platoons to give me Spearhead capability and to make the most of my mobility, and also just to extra harassing units. Then my obligatory LUCKY card for missions that require reserves (so to re-roll my reserves roll), or to keep for when I really need a roll to succeed. This list may find it hard going against a dug in infantry force, but if played well and thoughtfully should handle most games. 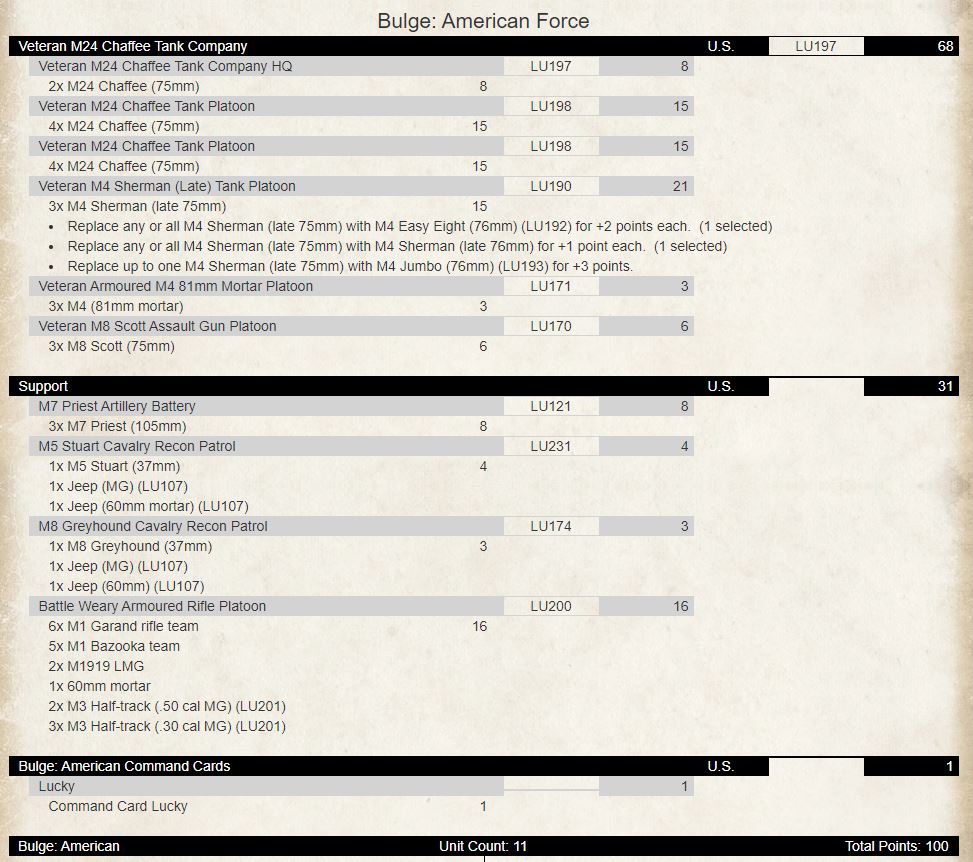 I think the Chaffee will make a great addition to any US Force and the new plastic Chaffee models look fantastic! I may have to swap out all my older metal ones for these beauties. Happy Gaming!