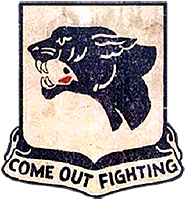 The 761st Tank Battalion was the first African-American armoured unit to see combat in the US Army. The courage of the men of this unit – facing not only the German war machine but doing so while facing prejudice and bigotry both at home and from many members of the Army’s higher command – is nothing short of inspiring. Because of their heroism and outstanding service record, the 761st Tank Battalion offered an opportunity to create a unique American armoured list for the new The Battle of the Bulge compilation. 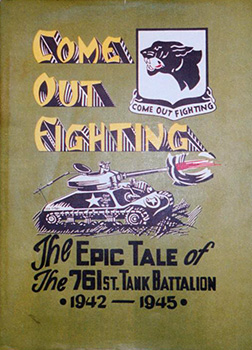 When creating a new list, I always start with the unit history itself and try to make not only the organization but any special rules characteristics of how the formation actually performed in the field. Fortunately, the 761st has been the subject of several books which have focused on the unit’s history on both military and sociological levels.

While compiling the list, I was also able to consult some extant primary sources detailing the unit’s inventory of tanks at key points in the war. 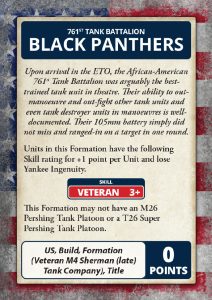 Initially formed in March 1942 as a part of the African-American 5th Tank group, the 761st began with basic infantry training before transitioning to their tanks. Because the Army never actually intended to use the formation in combat (as many senior commanders had no faith in the ability of African-American soldiers in combat roles) the unit would spend the next two years in training and serving as the opposing force for tank destroyer units during their own training. The Battalion therefore had far more experience with their vehicles than any other U.S. armored unit before their baptism by fire in combat.

Despite official misgivings about the use of African-American soldiers in combat roles, the 761st distinguished itself during its years of training with many commanders commenting on the quality of the unit. While at Fort Hood, Texas, the 105mm assault gun section gained a reputation for extreme accuracy, often ranging in with one shot and destroying a target with the second. The commanders were so delighted with their performance, that the section received additional training with the full gamut of ammunition types available for the 105mm. 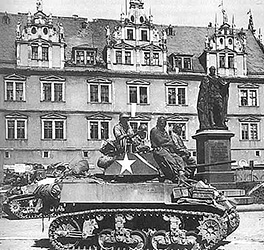 The tankers would advance under fire that had caused other veteran armoured units to withdraw. They would leave the relative safety of their tanks and clear obstacles. They would continue to fight even after pieces of their tanks had been blown off by enemy fire.

Severe losses during the Normandy breakout created an acute need for combat-ready armoured units to continue the advance in France. It was at this point that military need finally trumped racial prejudice, and the 761st was given a chance to prove itself. Arriving in France at Omaha Beach on 10 October, 1944, the unit would not actually see combat until 7 November as a part of Patton’s Third Army. 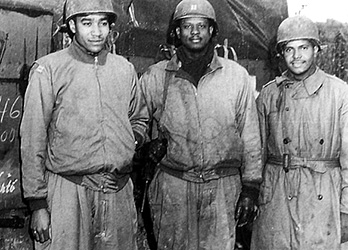 The 761st had more actual training time than any other formation in the U.S. armoured corps. For much of this time, the battalion was exceptionally well-led as well. Lt. Colonel Paul L. Bates was a strong officer unencumbered by the racial prejudices so common among his contemporaries. He believed in his men and their ability. Unfortunately he was injured at the outset of the 761st’s first battle in November 1944, and immediate leadership fell to Major Charles Wingo, a staunch racist who fled the battle once he realized he was in command.

Over the next several months the 761st would find itself often commanded by senior officers of questionable quality who would time and again needlessly put the Battalion in harm’s way, leading to many unnecessary casualties. This unusual combination of high skill coupled with high losses is analogous to other Flames Of War armies like the First Special Service Brigade and the Hero Tankovy lists. Therefore during the period when the 761st was poorly led by senior command, the list is Fearless Trained, but in recognition of the skill of the individual members of the unit, they pass skill tests as if they are Veterans using the Well Drilled special rule

Upon arrival in the ETO, the 761st Tank Battalion was arguably the best-trained tank unit in the American military (Lord knows they’d had enough time to train!). Their ability to out-manoeuvre and out-fight other tank units and even tank destroyer units in manoeuvres is well-documented. Their 105mm battery simply didn’t miss and ranged-in on a target in one round. The members of the unit were expert drivers and could not only cross terrain other tankers feared to tread, if they did bog down, they generally extracted themselves quickly. Unfortunately higher command frequently put the 761st in harm’s way (often unreasonably so), and their casualties were high.

In February 1945, Lt. Colonel Bates returned to the unit and would lead it for the rest of the war. During this time the battalion therefore enjoyed superior leadership and greater success in the field. No longer was the unit put in harm’s way heedlessly and needless casualties were reduced. Although the unit received several replacements at this time as well, the overall skill of the unit didn’t appear to drop based on their battlefield performance. The unit is therefore rated Fearless Veteran from February 1945 until the end of the war. 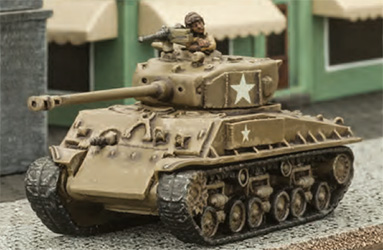 In addition to their dedication, the men of the 761st Tank Battalion were also versatile and adaptable. During training, each crew member of the 761st was cross-trained on all of the different crew positions in the tank so they could cover any combat role if the need arose.

This versatility extended to the platoon level as well, where lower-ranking tank commanders would on occasion commandeer more senior NCO’s tanks if they had better tactical knowledge of the battle situation. In recognition of this level of tactical flexibility.

Not only was every member of the 761st cross-trained in all tank crew positions, but the initial lack of strong senior leadership led to each member of the 761st being able to take over in a pinch. On numerous occasions even junior NCO’s who lost their tank would commandeer the tank of a senior NCO if they believed they had superior tactical knowledge of the situation. Even after being severely wounded in the leg when his tank was destroyed by enemy fire, Ruben Rivers commandeered a new tank, saying “I see ‘em. We’ll fight ‘em.” He continued to fight on for several days before being killed in action.

Perhaps no one exemplified this spirit better than Staff Sergeant Ruben Rivers. Despite losing a tank to a mine, seriously wounding his knee, Rivers simply took command of another tank and continued to fight on despite his injury developing a serious infection. When his unit came under fire on 19 November 1944, he covered his platoon’s withdrawal identifying the anti-tank gun firing on them stating, “I see them, we’ll fight them.” The Germans ultimately zeroed in on his vehicle destroying his tank and killing him. For his heroism, Rivers was posthumously awarded the Medal of Honour.

The men of the 761st Tank Battalion served with distinction, yet returned to a country that far too often greeted them with discrimination and marginalization. However, their sterling combat record planted the seed that would soon result in the integration of America’s armed forces.

In honour of these men, I have tried to compile a list that is different enough from the normal U.S. Armoured lists to have its own flavour while staying true to the unit’s history. Hopefully you, the players, will enjoy fielding this fascinating unit on the tabletop as much as I enjoyed researching and writing the list!