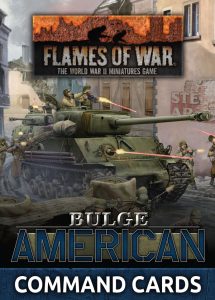 Contains 61 cards to enhance your force, field iconic warriors and customise your units.

Command Cards are entirely optional and can be added to your force in two ways. You can add them to your normal point cost, just as you would add a unit to your force, or you and your opponent can agree on a set amount of points that each may use just to add Command Cards to your lists.

Many Command Cards are hidden until they are used, so you’re never quite sure what your opponent’s battle plans are until they are revealed. While hidden, Command Cards do not affect their attached unit—a player must reveal them if they wish to gain the benefits of the card. Some Command Cards must be revealed at the start of the game; these cards are used to build your army and have the keyword ‘Build’.

Download a copy of the Command Card Rules here…

As you might expect, the Bulge: American pack has many of the same Command Cards as other nations like Softskin Transport, Lucky, etc. However, you will also find a great variety of cards for Warriors, Unit and Formation builds, as well as cards that enhance a particular part of your Forces capabilities. You will find plenty of flavourful cards as well to give your force a feel all of its own. As an example, there are a number of different build cards. Some do simple things like 57mm HIGH-EXPLOSIVE, which removes the No HE rule from a 57mm Anti-tank Platoon for 1 point for the Unit. The similar 76mm HYPER-VELOCITY AP card increases the Anti-tank rating of M4 Sherman 76mm guns to 13 (from 12) for +1 point per two teams (or part thereof). 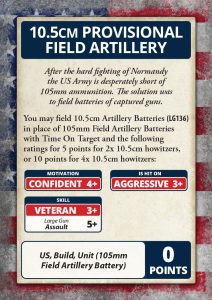 An example Unit Build card is the 10.5cm PROVISIONAL FIELD ARTILLERY. After the hard fighting of Normandy, the US Army is desperately short of 105mm ammunition. The solution was to field batteries of captured guns. With this card you can field a battery of captured German 10.5cm howitzers instead of your normal US 105mm howitzers. Other similar cards allow you to field captured German 8.8cm or Long 8.8cm guns instead.

There are a number of Formation Build cards. The 291st Engineer Combat Battalion cards are also title cards and allow you to field a Formation of engineers with the Damned Engineers! Card. This is combined with the Engineer Combat Platoon card to build your units. The other 291st Engineer Combat Battalion Title cards include ROADBLOCK which allows you to field Anti-tank Obstacles and Barbed Wire Entanglements in addition to Minefields in mission that allow you force to field Minefields, and BOOBY TRAPS which allows you to convert one Minefield into four Booby Traps which you deploy in the Ambush part of the Starting Step.