The Rifle Formation is comprised of the following: 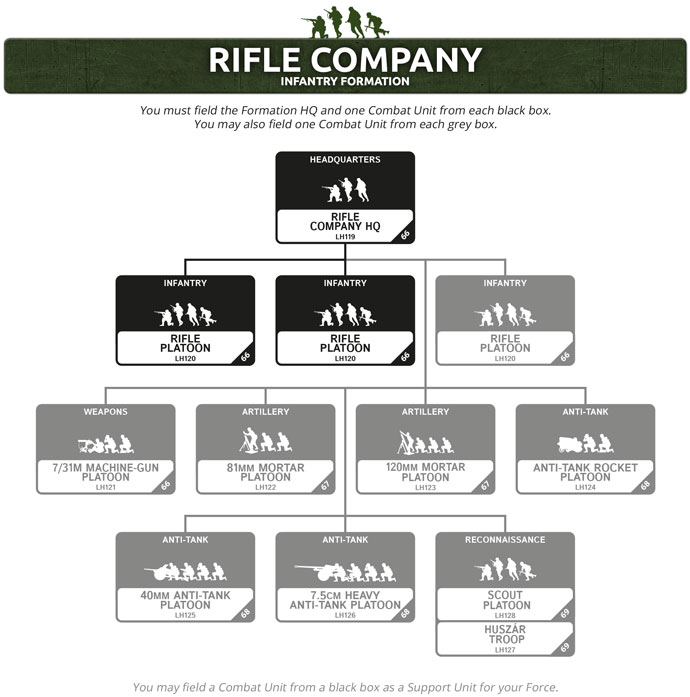 The Hungarian infantry are rated Confident Careful Trained and have the special rule “Defend the Homeland” which gives each unit a 3+ Last Stand.  The HQ platoon comprises of two 39M SMG teams for 2pts.   There are no addons such as panzerfausts.  This is the basic HQ.

With the rifle platoons, you have several options to optimise how you want the makeup of these platoons to look.  Seven M31 MG and 95M rifle teams for 6pts or ten teams for 10pts.  You can add Panzerfausts for +2pts to the platoon and is a no brainer for me here regardless of team type or size.  You can also beef up the platoons by adding a 7/31M HMG team for 1pt or a Panzerschreck team for +1pt.  I like to take the HMG team if I have the points.  If the platoon gets pinned, then you need that extra dice defending in assaults. The Panzerschreck, in my mind is totally worth it if you have the points.  Adds a second AT option for defending assaults or jumping out and having a go at a tank that wanders too close.  Makes most tanks think twice about assaulting facing two AT11/12 teams. 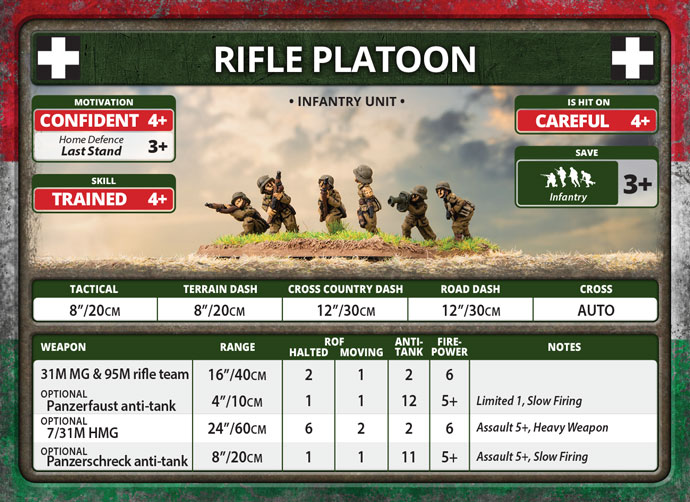 The next platoon to look at is the 7/31M Machine-Gun platoon where you can have three of these teams for 3pts.  Something to consider taking, especially if you do not take them in the infantry platoons.  Adds another platoon for the formation count.  I do not always take these but can be useful to bolster defending an objective.  You can also take the Machine-Gun Nests command card for 2pts.  This will allow you to place you HMGs across the table in your deployment zone as independent nests.  No longer counts toward your formation anymore but that depends on your playstyle and how you want to use them.

Up next are the mortar platoons, starting with the 81mm Mortar Platoon – I think one of the best buys in the formation with two for 3pts or four for 6pts.  This is an absolute no brainer – range of 40” and can fire a smoke bombardment.  This is one of my core units for this formation. 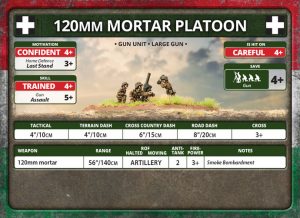 The 120mm Mortar Platoon is also a great option – two for 4pts or four for 8pts.  Another no brainer for me with a range of 56”, AT2 and FP3+ and can also fire a smoke bombardment!  Another core one for me.

Next up are the Anti-Tank platoons.  The first up is something unique to the Hungarians – a home grown anti-tank rocket launcher called 44M Buzoganyveto.  It is an AT14 FP5+ close defence weapon with a range out to 12”.  Take two for 5pts or three for 8pts.  Absolute no brainer here for the points.  Put these with one of the infantry platoons defending an objective against any tanks freeing up other assets to defend the other or go on the offensive.  The 40mm Anti-tank Platoon has three guns for 7pts.  Useful AT7 FP4+ with a range out to 24” or firing Kerngranate has AT12 FP5+ out to 12”.  The 7.5cm Anti-tank Platoon has two guns for 7pts or three for 11pts.  AT12 FP3+ with a range out to 32”.  Great little units to provide some decent AT support for defending assaults or keep your opponent’s armoured elements honest and provide another unit for the formation break. Unlike the Finns and Romanians, the Hungarians do have access to AT14 with their home-grown anti-tank rockets as well as their own Tigers and Panthers.  So, we do not need to rely on the German allies for this although there would be cases to add some German units or formations for flavour.  Let us have a look at how a list might look at 105pts: 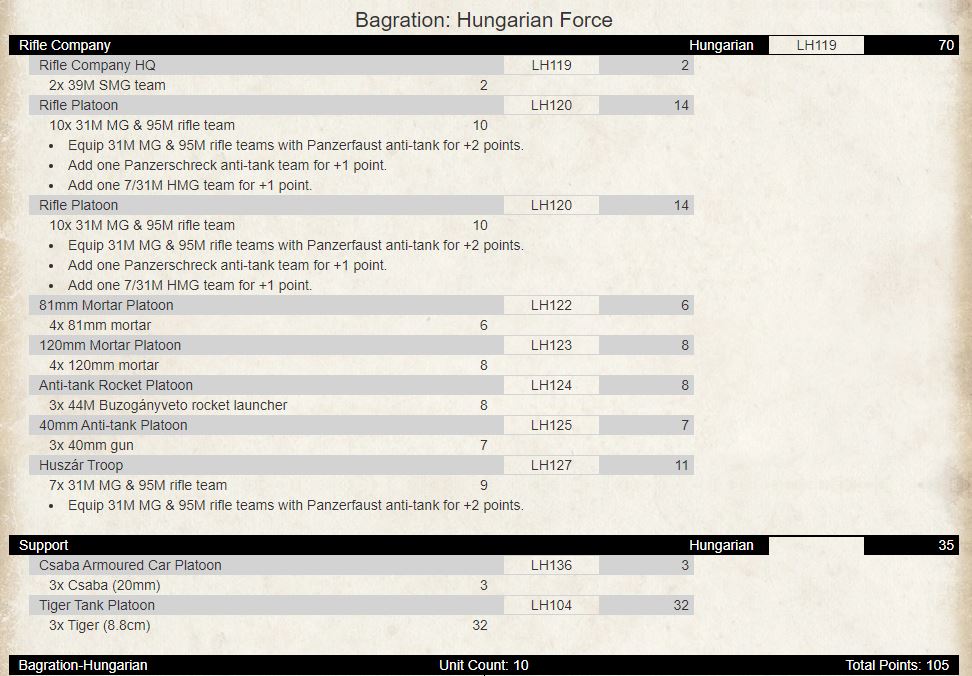 Eight units for the formation break.  Twelve teams in the infantry platoons making it eight hits for a pin.  There are two platoons to defend objectives with close defence AT units in support.  Two spearhead units with the Huszars and Csabas to launch your attack from.  Tigers for high end AT and assaulting.  Two mortar batteries for your template options.  If you wanted to get some other options in – eg another tank platoon or assault guns then you could have a list like this: 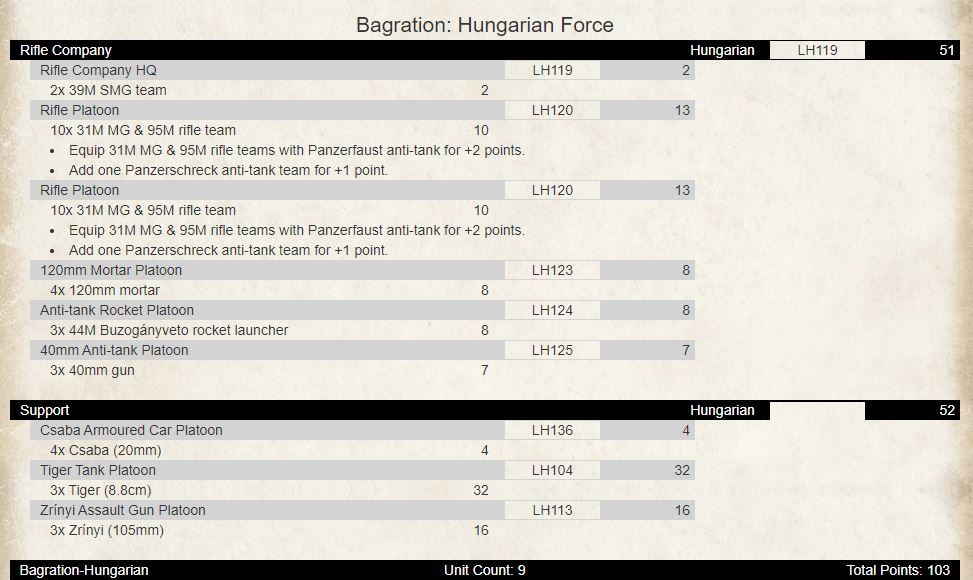 Dropping the Huszar Troop and the 81mm mortars allows us to take the Zrinyi Assault Gun Battery.  Still have two templates with more amour and we still have spearhead and the Tigers.  Six platoons for the formation break.

Now onto the nine command card formations.  First up is the Pioneer Company and is comprised of the following:

The platoons have the same characteristics as the core Rifle Formation.  The difference is that you pay an additional 1pt for the formation.  The HQ platoon and Pioneer platoons can dig in on a 2+ and cross minefields on a 2+.  You also pay an extra 1pt for each Pioneer Platoon and you can swap out up to two teams for flamethrowers for +1pt each.  There are no other units in the formation, so if you take it, you will probably want to take three platoons and take some heavy armour, and some artillery. 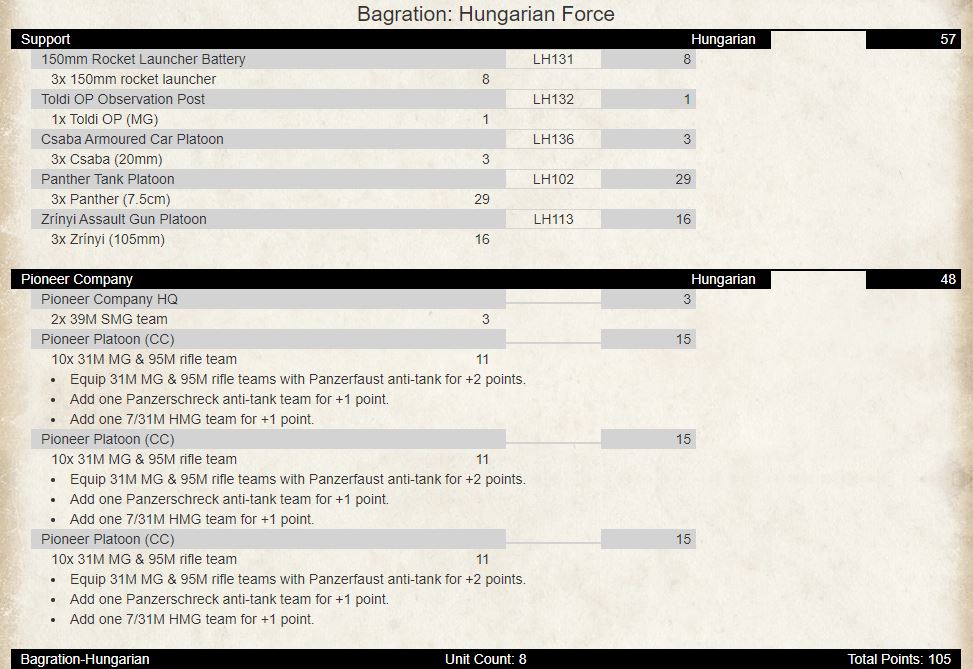 You have a maxed-out formation and can leave two platoons defending objectives if required.  The Panthers for heavy AT work, two artillery templates, Csaba Armoured Cars for spearhead.

The next one up is the Assault Pioneer Company and is comprised of the following:

The platoons have the same characteristics as the core Rifle Formation.  Like the Pioneer Formation above, the difference is that you pay an additional 5pts for the formation.  The units are now Veteran instead of Trained.  The HQ platoon and Pioneer platoons can dig in on a 2+ and cross minefields on a 2+.  You also pay an extra 2pts for each Pioneer Platoon and you can swap out up to two teams for flamethrowers for +1pt each.  There are no other units in the formation, so if you take it, you will probably want to take three platoons and take some heavy armour, and some artillery. You have a maxed-out formation and can leave two platoons defending objectives if required.  The Tigers for heavy AT work, one mobile artillery template, Csaba Armoured Cars for spearhead.

The next formation is called Fresh Divisions.  This card downgrades all units except the HQ to Confident Aggressive Green for -2pts per platoon.  Also, all gun and heavy weapons teams now assault on 6.  This card allows you to pack more into your force – probably add another armoured platoon, anti-tank guns or artillery battery.  Taking the same units as the first list, lets see what else we can add: 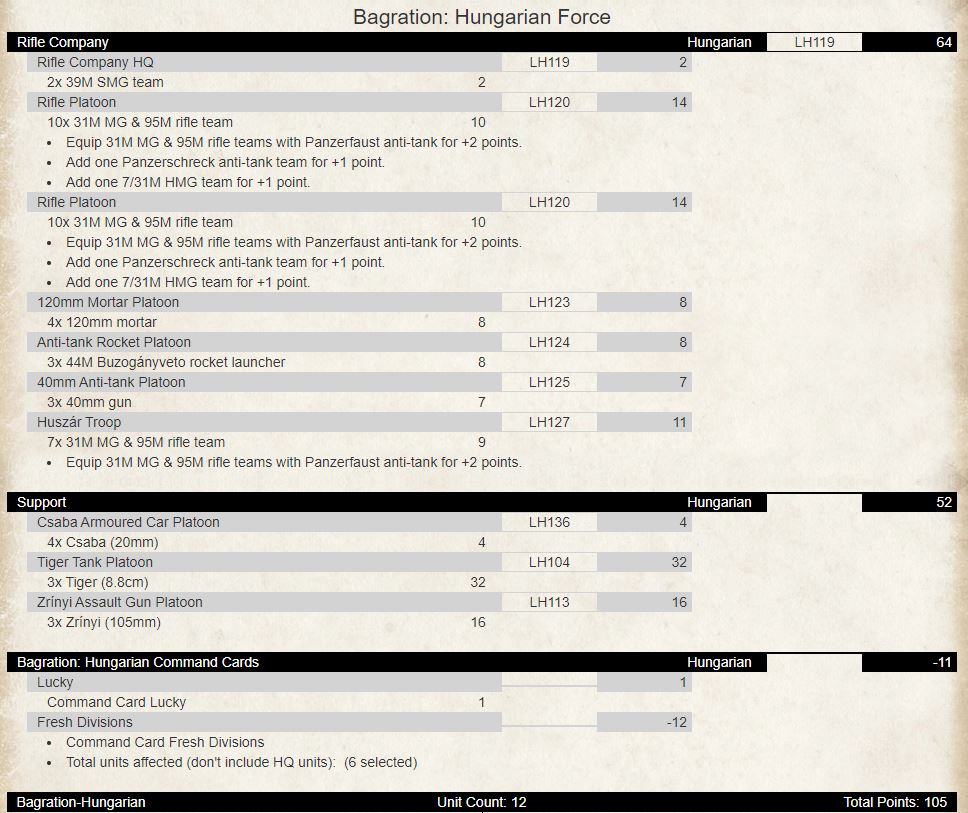 So, I dropped the 81mm mortar platoon as well as the downgraded units to add in a Zrinyi Platoon.  Seven units for the formation break.  Doubles as second template and anti-tank platoon.  This force will not be attacking much but you can still defend, and you have mobile elements to cause some havoc.

Next up is the Volunteer Rifle Company and comprises the following: Maxed out the formation with six units.  Fearless Aggressive troops use to your advantage with twelve team platoons to absorb eight hits and get those assaults in using the Csabas to spearhead in with the Tigers and artillery in support.  Leave a platoon of infantry and HMGs on defence with the 7.5cm AT guns.

Border Guards is the next formation – comprised of the following:

The differences here is that the Border Guard Platoons do not take panzerfausts or panzershrecks.  You can replace up to one team with a flamethrower for +1pt and add a 20mm Anti-tank Rifle team for +1pt.  The other unique platoon here is the 75mm Mountain battery.  This card allows you to change a 100mm Gun battery for 1pt with a range of 64” AT2 FP4+ template or AT5 FP3+ with a range of 16” for direct fire.  Advantages are also that it now has a 4” tactical move and a 3+ cross check.  How could this look? Six units for the formation break.  Two templates in the formation.  High end AT to deal with heavy armour along with some AT11 to deal with light and medium armour. Spearhead to complement the list.  Infantry light on anti-tank defence though – so need to be careful there.

Next is the Motorised Rifle Formation, which is comprised of the following:

Essentially the same elements as the core rifle formation but with a Nimrod Self-propelled AA Platoon.  This unit is two Nimrods for 4pts.  Mounting the 40mm Bofors gives you AT7 FP4+ with FA1 SA1 TA0 and 4+ cross check.  They also lose the Home Defence rule but gain Huszar which allows you to roll a 3+ for a Follow Me. Seven units for the formation break.  Only one template unit but another tank platoon to deal with light and medium armour.  You could switch out the Turan IIs, switch out the Tigers for Panthers, and drop the two HMGs to get a Zrinyi Platoon for dual purpose artillery template and light medium AT work.

The Scout Company Formation is like the Motorised Rifle Company.  It is comprised of the following:

The main difference here is the addition of the Csaba Armoured Car Platoon instead of the Nimrod platoon.  Here is an example list: Nine units for the formation break and the Csaba Armoured Car Platoon is now part of the formation.  You have five spearhead units in the formation.  Only one template.  If you want two templates, then remove a scout platoon or Huszar troop.

Second to last formation now and one of the most exciting is the Huszar Squadron!  The units that make up this formation are:

The cavalry units lose Home Defence and gain Huszar rule where you roll a 3+ for Follow Me.  The formation includes a command card artillery battery called 75mm Huszar Battery.  This card allows you to change a 100mm Gun battery for +1pt for two guns or +2pts for four guns with a range of 64” AT2 FP4+ template or AT5 FP3+ with a range of 16” for direct fire.  Advantages are also that it now has a 4” tactical move and a 3+ cross check.  Oh, and they now have Veteran skill.  How could this look? Seven units for formation break and you have three Huszar troops in the formation with Armoured Cars to spearhead them into assault with the Tigers and Turans providing support.  Two templates to help pin enemy infantry and gun teams.

Alright, the final formation.  The Parachute Company.  The best of the best and saved to last.  This Formation is comprised of the following:

The cream of the crop in Hungarian Armed Forces.  They are Fearless Careful Veteran and gives your force some elite infantry that you can take on other elite forces on an equal footing.  The formation loses Home Defence, but they are now Fearless.  The HQ is 3pts for two teams.  Parachute platoons cost an additional 4pts per platoon.  The remaining four optional platoons, machine guns, mortars, 7.5cm anti-tank guns and scouts cost an additional 1pt per unit.  The Scouts also now assault on 4+.

So, let us see what we could take in the force now with these twelve team strong platoons: 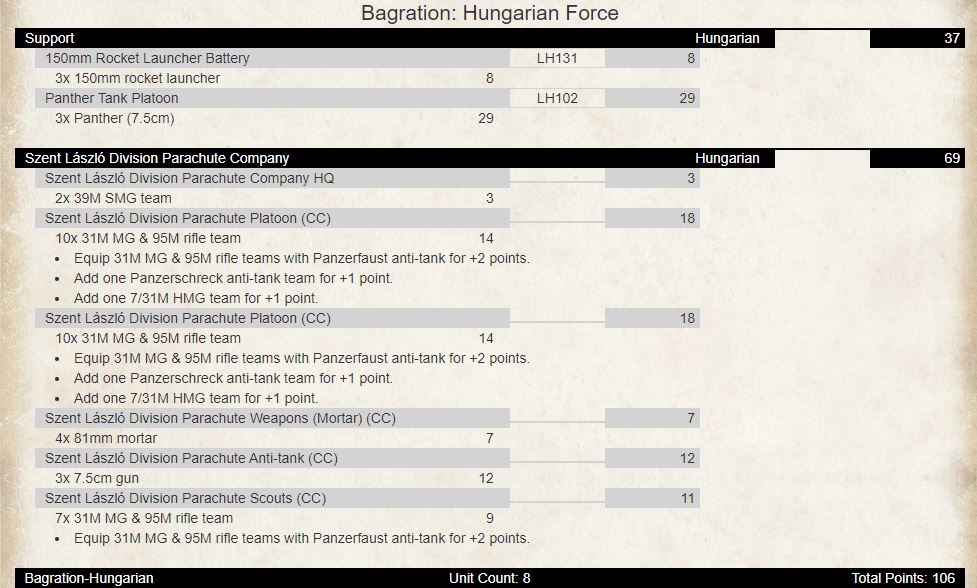 Six Fearless Careful Veteran Platoons for the formation break.  Two templates to assist with pinning the enemy whilst the Scouts spearhead in the Parachute platoons.  You could tweak the list to get the third Parachute platoon in there by removing the Panthers and on Turans instead.

So, there you have it – ten infantry formation options to choose from.  Hungarian Infantry have some uniqueness about them with Cavalry, Recon, Parachute that you can exploit in your games.  I hope this has been of some help.  Happy List Building!