The Romanians have some interesting home-grown anti-tank options so I thought I would look at the options available to support them.  There are both self-propelled and towed guns and there are advantages to both depending on your points, force, and playstyle.

There are three anti-tank slots in the army diagram support section.  The chart below shows you the options for each slot:

As you can see, you can take whatever mix suits the needs of your force.  Need something mobile then take one of the TACAMS (TACAM stands for Tun Anticar pe Afet Mobil or self-propelled anti-tank gun).  Playing more defensively then take two platoons of guns.

Starting off with the guns first, we look at the workhorse gun of the German army – the PAK 40 7.5cm anti-tank gun.  A number of these were supplied to the Romanians.  This gun has a 32” range and packs a AT12 FP3+ punch.  Two for 6pts, three for 10pts.  Can take on most tanks and has a 3+ gun save making them harder to dig out.

The second gun is the home grown 75mm M43 Anti-tank gun.  This gun took the best characteristics from the Pak 40 gun, Vickers 75mm AA gun and Zis 3 Anti-tank guns.  This is reflected in the game with a 36” range and packs a AT13 FP3+ punch.  Still has a 3+ save so this is probably the best gun overall for the Romanians combined with the range and AT.  Take two of these platoons to cover the whole board.  Two for 7pts, three for 11pts. 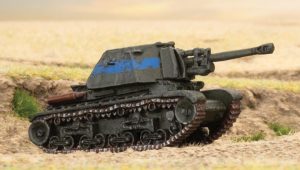 Moving onto the self-propelled guns now, we have the TACAM R-2 first.  This tank hunter came about by taking old R-2 tanks and mounting captured ZIS-3 guns on the chassis and chambered to fire Romanian ammunition.  It has FA3 SA1 and open topped so TA0.  The gun has a range of 28” and AT10 FP 3+.  Its slow but has a 3+ cross check.  This is suitable against most light and medium armour and provides some flavour to your force and a cheap ambush unit of two vehicles for 5pts and three for 8pts. The final tank hunter is the TACAM T-60.  This came about from using two pieces of captured equipment to create a new gun platform.  Mating the T-60 light tank and the 76.2mm obr 1936 field gun together gave birth to the TACAM T-60.  FA3 SA1 and open topped so TA0.  The gun has a range of 32” with AT12 FP3+.  It has a terrible cross check of 5+ though – so you do not want to spring your ambush in the woods if you can help it.  This unit would also provide some flavour for your force and at 7pts for two or 11pts for three.

So, depending on what you take in your formation(s), the force anti-tank slots can give you some extra oomph, mobility, or coverage to take on the enemy depending on your preferences.  If you are taking Soviet or German allies with AT14 or higher (think IS-2, Tiger, Panther, Panzer IV/70) then you could take the cheap TACAM R-2.  If you are not taking allies, then you should consider taking the 75mm M43 Anti-tank guns.  Take both platoons if you can.

In summary, the Romanians get some cool AT options to choose from.  Take the best unit(s) that suits your requirements and cost to fit into your force and enjoy list building!