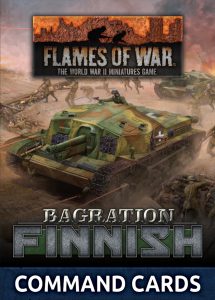 Contains 23 cards to enhance your force, field iconic warriors and customise your units.

Command Cards are entirely optional and can be added to your force in two ways. You can add them to your normal point cost, just as you would add a unit to your force, or you and your opponent can agree on a set amount of points that each may use just to add Command Cards to your lists.

Many Command Cards are hidden until they are used, so you’re never quite sure what your opponent’s battle plans are until they are revealed. While hidden, Command Cards do not affect their attached unit—a player must reveal them if they wish to gain the benefits of the card. Some Command Cards must be revealed at the start of the game; these cards are used to build your army and have the keyword ‘Build’.

Download a copy of the Command Card Rules here… 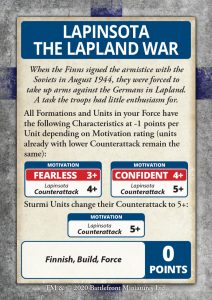 As you might expect, the Bagration: Finnish have many of the same Command Cards as other nations like Softskin Transport, Lucky, etc. However, you will also find a great variety of cards for Warriors, Unit and Formation builds, as well as cards that enhance a particular part of your Forces capabilities. You will find plenty of flavourful cards as well to give your force a feel all of its own.

As an example, there are a number of different build cards. Some do simple things like the Lapinsota The Lapland War, which changes the rating of the Units in a Finnish Force to reflect the less enthusiastic approach the Finns had against the Germans as the ushered them out of their country into Norway. This Command Car changes the Counter Attack ratings down by one.

The Light Infantry Company allows you to build a Formation of the elite Jäger or Jääkäri that formed the infantry of the Finnish armoured division. As well at the formation build card there are four cards to build specific units for this formation. 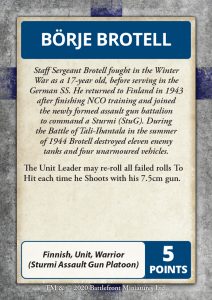 There are four Warriors to field with the Finns. One of these is Borje Brotell who fought in 1944 is a Sturmi StuG assault gun commander. He and his crew destroyed eleven Soviet tanks during the Battle of Tali-Ihantala. Hi is rather handy with his Sturmi’s 7.5cm gun.