Finland did not really have much in the way of domestic tank production in World War II.  Instead they relied on a mismatched series of tanks captured from the Soviets during the Winter War, older pre-war models they already possessed or whatever they could get from their German “allies”.  In a few cases, the Germans handed over captured soviet T-34s to bolster the Finn’s ranks for armoured vehicles.  The results created armoured companies that were very eclectic in nature with a few containing modern German and captured Soviet vehicles such as Panzer IVs and T-34/85s.  However, the majority had platoons of the outdated T-26 light tank.

New Options for Your Games

When I saw the T-26 Armoured Company force diagram In the Bagration: Axis-Allies Book I was thrilled to see the variety of options that could be taken to evoke the thoroughly mixed up and varied nature of the Finnish tank divisions.  I knew it would be fun (and challenging) to play such a force.  Also, and more importantly for me, with the variety of vehicles, modelling opportunities would be boundless.  I love tanks in all forms and was happy to see that the more obscure tanks, like the T-28, could get back on the table.

In this article I am going to go over my thoughts on the Finnish armour options and detail some ideas of how they can be employed in your games of Flames of War.

The T-26: Obsolete Does Not Mean Useless

The immediately obvious fact is that the Finns have to rely on tanks that are past their prime. The T-26 has an armour rating of only 1 (on all facings) and an AT 7, 4+ firepower main gun, while the T-28, though it looks awesome, only has a front armour of 4 and its gun is hardly any better.  When you consider that these vehicles will be going toe to toe with IS-2s, Churchills and M-10s, they seem rather outclassed.  Which of course they are.  But a at least you won’t strain yourself picking up the dice to take their armoured tank team saves as you are not likely to ever get one! 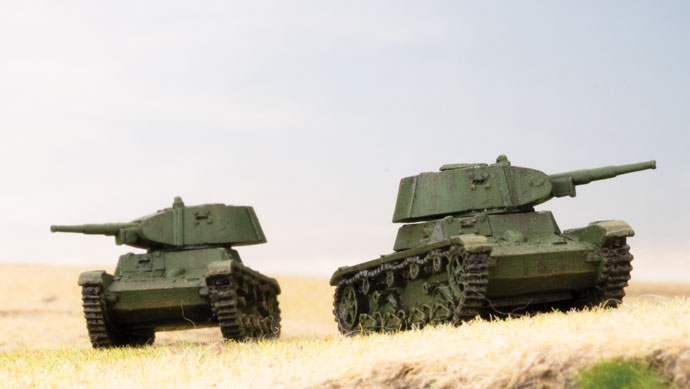 What Flames of War players need to remember though is that good armour and big guns are only part of the equation.  As the saying goes veterancy is the best armour, and the Finns have that going for them.  With a Hit On stat of 4+, a Skill of 3+ and a Motivation of 3+, Finnish armour is hard to hit, very hard to scare off the table and really good at maximizing Blitz and other special movement orders.  Though the tanks will blow up when hit, for a skilled user you can spend a lot of time drawing enemy fire but remaining in the fight.

There is also the great wargames equalizer to consider. Points costs! The T26 runs 6 points for 5 tanks.  That is cheap.  A single IS-2 is about 7 points (and don’t get me started on Tigers) so you can go ahead and outnumber your opponent 5 to 1.  (I hear you say, but the T-26 can’t penetrate the armour of the IS-2 and you are right, but hold on until we talk about captured tanks). Like the T-26, the T-28 is past its prime.  It has essentially the same drawbacks with lack lustre armour and guns. Despite this, it also has similar advantages to the T-26 in that the crew stats are excellent and it is cheap.  It is however less numerous as they max out at 4 in a unit (for a cheap 9 points) and you can only ever take one platoon in a formation.   On the table where they really differ is in the assault.  The T-28 is absolutely festooned with machine guns and this is reflected by its 2+ Assault Value.  Don’t get me wrong, this makes the tank pretty situational as it would need to get close to gun teams or infantry units that do not have panzerfausts or other anti-tank weapons to guarantee success.  But if you can find the right target, you could cause your opponent a real headache.  Ultimately though, the T-28 for its imposing size and appearance is likely to be of more use drawing your opponent’s fire as they seek to ward off the potential of facing a 2+ assault. This of course is not necessarily a bad thing because while your enemy is shooting T-28s they are not shooting your more valuable tanks. The T-34: Turning the Tables on the Soviets

For any experienced Flames of War player, the T-34’s capabilities should be well known.  They are flexible, have decent armour, can be well armed and are not overly pricey for points.  The Finns bring a new dimension to this by adding their great stats, making them even better than the Soviet version as they are hit on a 4+.  Despite this, the Finnish armoured platoons armed with the T-34 get smaller number to reflect that the T-34s they have are all captured from their enemies.

The real importance of the T-34 in Finland’s ranks however comes from its ability to make up for the shortcoming of the T-26.  The T-34’s 85mm canon has a range of 28 inches and a AT of 12 (Firepower 3+). This makes it the premier anti-tank weapon in Finnish tank companies and you will want it to sit back and snipe at other enemy tanks. The next tank option is the KV-1 of which the Finns only ever had 2.  You unsurprisingly then, you can only get these as a 2 tank platoon for 12 points.  The KV-1 is a more capable assault tank than the T-28 and likely would work exactly the same in the game, although better.  With a front armour of 9 and a 2+ assault it can really force your opponent to worry about having these behemoths penetrating their lines.  Despite this, since you will only ever have 2 in your formation, it is more of a fun inclusion than a competitive one in my opinion.  Platoons of 2 tanks are notoriously vulnerable in Flames of War because of last stand tests. The Panzer IV: German Technology to Bolster Your Firepower

The command card Panzer IV Armoured Platoon requires a mention.  With this you can replace a T-26 platoon with up to 4 Panzer IV (7.5cm) for 24 points.  This is a good option to add a decent all-round tank with the same excellent Finnish stats to your force.  This is more expensive than a squad of T-34s (85mm) but also has 1 more tank.  Panzer IVs bring a lower AT of 11, but a better range of 32 inches than your T-34s.  If you suspect your engagements will be at longer ranges then this card will likely be of interest to you.

Putting It Into Practice:

By now it is likely obvious that there are 3 main approaches to using the Finnish T-26 Armoured Company. These are:

Whether you use swarms of light tanks, higher quality tanks, or a mix of the two, the Finns bring excellent stats and a lot of flexibility to the games table that should be fun to play.  Bagration: Axis -Allies really has the potential to add an exciting series of options to Flames of War and creates a new dimension for players who love a good variety of armour in the game.  So, grab some Finns and start mixing and matching your armoured vehicles.  Discover the new possibilities that can bring you victory on the table top.