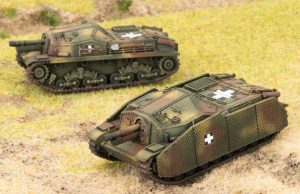 The Zrinyi Assault Gun was Hungary’s attempt to capitalize on the success that their German allies had with the STUG.  As a trade-off between complexity and fire power, the STUG became a very attractive weapon as the Axis powers were put on the defensive by allied attacks.  The main issue was that the STUG was never plentiful enough to be shared with all of Germany’s supporters, so other means had to be sought out.  The Hungarians took the problem into their own hands and built a similar vehicle, the Zrinyi.  The intention was to produce the Zrinyi in 2 variants, the first being a high velocity gun armed tank hunter and the second being a 105mm howitzer armed assault gun.  Unfortunately for the Hungarians, the first version did not make it out of prototype stages, but the Howitzer reached the battlefront with between 60-70 of them produced.  Eager to use these machines to good effect, they did not let their scarcity deter deployment and they put Zrinyi in mixed companies of other weapons.

In Flames of War the Zrinyi Assault Gun Battery is the main formation to let you field this interesting tank.  But don’t let the name fool you, like many of the Axis Allies, the Hungarians had to mix and match the contents of their armoured companies to fill out the numbers.  In game terms this means that the Zrinyi assault Gun Battery can have STUGs, Hetzers and 7.5cm Anti-Tank guns in it as well.  Let’s take a look at each in turn and explore how these make for a flexible and fun formation to play in Flames of War.

Despite the anti-tank version never being completed, the 105mm howitzer Zrinyi proved extremely capable in multiple roles for the short time it was available.  In Flames of War this is reflected in the vehicle’s stats.  Hungary has decent soldiers meaning all of their tanks are Hit On a 4+ and the Zrinyi troops have a skill boost over other Hungarian units with Veteran Skill of 3+.  These are solid values, but what makes the Zrinyi platoon interesting and unique is the tank itself. With a decent Front Armour of 7 the Zrinyi is able to hang out with the other medium tanks (and assault guns) in the late war arsenal. This rating is good for most situations but is not going to make it an impenetrable behemoth.  What is different is its gun.  The 105mm Howitzer is quite possibly the most flexible big gun in Flames of War. It has artillery stats with AT 3, 3+ Firepower and a great range of 64 inches.  As they come in platoons of 3, the Zrinyi can rain down long-range fire as well as any dedicated artillery unit… but this is not all.  The 105 also has an AT of 10 and 2 shots halted (1 moving) from direct fire meaning it can take on other medium tanks and even some heavy ones.  Better still, it has Firepower 2+and HEAT, so when it hits, its target is pretty much doomed.  In addition to this, the gun also sports the Brutal rule.  The rerolled saves this causes makes a mockery of foxholes and other bulletproof cover for infantry.

These weapon stats then make the Zrinyi interesting in that this tank can almost do it all.  The major trade off being that it is slow firing, but that can often be mitigated with using Blitz moves.  (It also takes the usual penalties in assault as all assault guns do). Though none of these stats make it tower over Tigers or IS-2s in effectiveness, the Zrinyi can take on most missions making it a very adaptable choice for filling multiple roles on the battlefield.

This option is nothing new.  The STUG, more than any other axis vehicle, is the ubiquitous late war option.  It has a decent gun, decent armour and the Hungarian version has good crew stats.  It is an all-around dependable tank.  Despite this, the Stug’s gun with AT 11, Firepower 3+ is maximized for anti-armour duty and this is the key difference from the Zrinyi’s generalized armament.

While building a force you can select 2 platoons of STUGs in a Zrinyi formation which can up your dedicated anti-tank abilities quite a bit.  If you worry the 105mm howitzer is not enough to take on your opponent’s armour, then the STUG might be just what you need 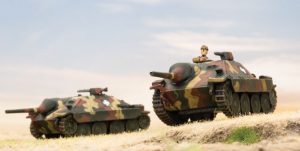 The Hetzer is really a kind of bargain basement STUG.  They are 4 points each vs the STUG at 6.  The trade-off comes at the expense of Overworked in the gun profile and a dismal cross of 5+.  Don’t get me wrong, the Hetzer can still hit hard with essentially the same gun as the STUG but you have to play smart to compensate with careful tactics.  Where the Hetzer shines for the Hungarians though is in numbers.  You can take 2 batteries of 5 tanks in a Zrinyi Formation if you want.  That would mean 10 small tank hunters pounding out up to 20 AT 11 shots each turn.  This can take the focus off your Zrinyi so they can sit back and shoot as artillery in peace, or fill the same role as the STUG, only with greater numbers on the table.

Zrinyi formation can take 1 platoon of up to 3 7.5cm guns for an economical 11 points.  Like the STUG, this weapon is nothing new.  At AT 12 it is a solid choice when you don’t need mobility.  This option gives the formation a unit that excels in missions with the Ambush special rule, or when you need a unit to sit on and hold an objective (while scaring enemy armour away).

Looking at the units available to the Zrinyi Assault Gun Battery I see 2 main applications for the Formation: 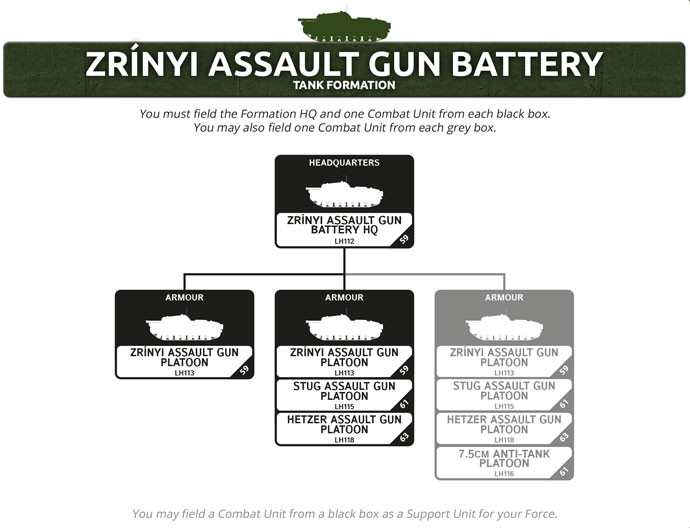 Flexibility:
By loading the formation up on 3 full batteries of Zrinyi you can capitalize on the “Jack of all trades” nature of the tank.  This could be really useful in situations where you are rolling off for your missions and/or are uncertain about terrain.  By having a unit that can both direct fire and function as artillery, you can simply adapt to the conditions…hopefully better than your opponent.

If you are taking your Zrinyi as your only tank in the formation you may consider dropping 1 platoon for 7.5cm guns, or using the Assault Artillery Rifle Platoon Command Card to add more staying power.  A good-sized squad of Anti-tank guns or Infantry could be very useful for guarding any objectives should your Zrinyi have to drive away to exploit gaps in the enemy lines, or go on direct fire duty.

Anti-Tank:
Though the Zrinyi is cool, so are Hetzers and Stugs!  If you feel that the multi role nature of the Zrinyi makes them just a little too weak in a tank on tank fight, then might I suggest loading up the formation with 2 platoons of STUGS or Hetzers (or 1 of each)!  Their AT 11 guns punch harder than most other dedicated tank killers the Hungarians can get.  Also, since you need to take a compulsory Zrinyi platoon, you will come way with solid formation level artillery as a result.  If the formation has to do antitank work entirely, then the 105mm Howitzer can back up the more powerful guns of your other units.

The Zrinyi Assault Gun Battery is an interesting option for the Flames of War player.  Not many tanks in the game can function in practically all capacities like the Zrinyi. But remember the Zrinyi formation can still take solid anti-tank options at the formation level should the need arise.  This combination should lend the Hungarians the much-needed versatility to take on their opponents and prevail.

So grab your Hungarian armour or go to your friendly local games store and get some of the awesome new plastic Zirinyi kits and put your plans in motion.