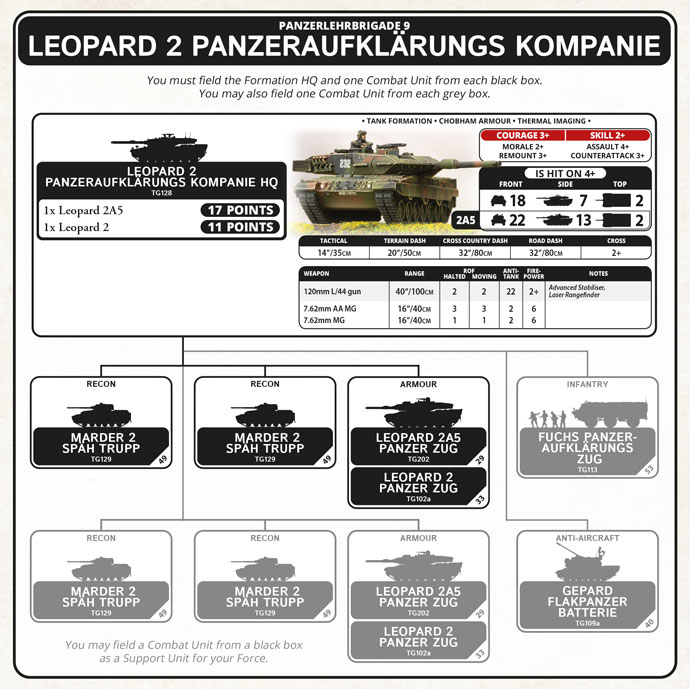 One of the biggest advantages of this formation is that they are extremely cheap and add optional units. Most West German formations are forced to deploy expensive compulsory units to avoid breaking formation, meaning that fewer points are available once you have completed this. Considering how expensive the highly motivated/trained West German units are, it’s definitely a mess. Contrary, all Panzeraufklärungs formations have the same characteristics with cheaper compulsory units.

For just 30 points, the Panzeraufklärungs Kompanie may deploy 6 units, including infantry support and anti-aircraft cover. That should give you a solid base to build your force, and leaves many points for other units. If you 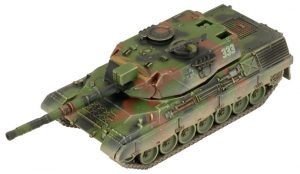 need more points you can remove other units with a minimal list of 13 points comprised of 2 + 2 Luchs and 1+2 Leopard 1s. Personally, I do not recommend this extreme approach, instead, try adding Luchs as they are good at managing both IFV and light units making the formation stronger. In the previous book, they were an auto-include unit, now with an increase to 2 points you’re forced to make a choice. The formation can also include a second Leopard 1 unit. This could be a good idea because Leopard 1s are a great tank; they have limited armour but have a lethal gun. If your plan is to include a unit like the Leopard 2A5 in support you will need to be careful of how many points you spend so you have enough leftover. 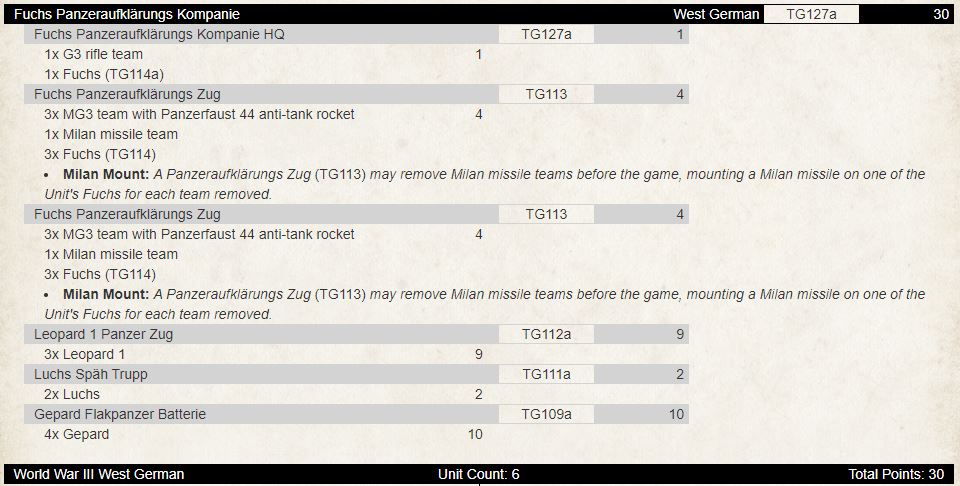 Fuchs formations may deploy 6 units for just 30 points, and as their name suggests they have an important infantry component. The Fuchs Panzeraufklärungs is not a big infantry unit with only 3 MG and 1 Milan team but remember that the Marder Panzergrenadier Zug only has one extra team (despite it being an important one!) so everything considered it isn’t that small. 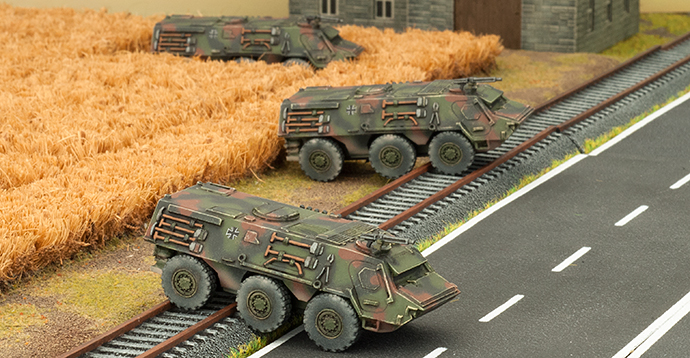 They are useful at occupying territory, limiting enemy movements, and capturing objectives. They also bring Anti-tank 21 to the formation, and you can never have enough AT 21. The Leopard 1 Zug can be swapped with a third Fuchs Panzeraufklärungs if you want more infantry (or just one more Milan!). The Fuchs armoured transport is not the best transport since its armed with just an MG and can only provide some anti-infantry shots, but it can mount the Milan that is carried by infantry thanks to the Milan Mount rule. The cheapest Fuchs Panzeraufklärungs Kompanie is composed of the HQ and two Fuchs Panzeraufklärungs Zugs for just 7 points.

And this is the new formation. It’s a more interesting one due to the presence of two new units; the Marder 2 and Leopard 2A5. The Leopard 2A5 is currently the best tank in the game; it’s armed with anti-tank 22 which not the best gun, but it does have the best armour with a front armour rating of 22. It’s fast and well-skilled (skill 3+, morale 3+) so it certainly isn’t cheap! If you play at 85 points, finding enough points to deploy them can be very difficult. That’s the reason why the Leopard 2 Panzeraufklärungs Kompanie is a good choice.

With an additional point, you could choose to upgrade your Leopard 2 Zug to a Leopard 2A5 Zug with two tanks, but you lose 2 shots. Marder 2s are the other compulsory unit for this formation, the size of the unit is small consisting of only two teams but they have Scout, which should help them survive, unlike the Marder 2 IFVs of the Marder 2 Panzergrenadier Zug. Their cost isn’t too limiting but becomes important to consider if you upgrade to the 50mm gun. I wouldn’t recommend this option as the 35mm gun can manage enemy IFV and keep the formation cheap, and considering the presence of the Leopard 2/Leoapard 2A5 tanks is important. In my opinion, three Marder 2 units will provide a good number of models for formation morale.

The formation also includes an infantry option mounted in Fuchs, and a Gepard Flakpanzer Batterie to provide anti-aircraft support. Including both these units is a good idea; the Gepards are a must-have if you play big tanks as aircraft/helicopters are their main threat, whilst infantry will help the force manage enemy infantry, leaving enemy tanks to be wiped out by the West German supremacy!

Now that we have had an in-depth look at the Panzeraufklärungs, try them on the battlefield, trust me, they’re wonderfully effective formations!
Don’t forget to hit hard with your Leopard 2s!