With the release of the Bagration German Forces on the Eastern Front, 1944 as a follow up on the Bagration: Soviet we have all the army lists and models to recreate one of histories deadliest campaigns. To support these releases Battlefront is re-releasing an old friend of mine, Firestorm Bagration.

For me this is the best way to play Flames of War. To play your battles as part of a larger campaign in a narrative setting. Normal Flames of War games are fun by themselves but when the battle plays a great part of a whole this becomes more exciting. Firestorm: Bagration allows you to re-fight the battles of Operation Bagration on a grand scale. The map will allow you to fight for the historical cities of Minsk, Orsha, Vitebsk and Smolensk.

Click here to Order Firestorm:  Bagration in the Online Store…

What You’ll find in Firestorm: Bagration

This is the vinyl map is where you will represent the push and pull of the battlefield, placing markers and tokens as you launch offensives and take or hold territory all while maintaining your supply lines. For a player like me, historical setting is important and to be given a chance to fight the campaign in a larger context is rewarding. Your main games will of course be regular Flames of War games. The Firestorm system allows you to play these games as part of a larger campaign. The key element are the Firestorm Troops. 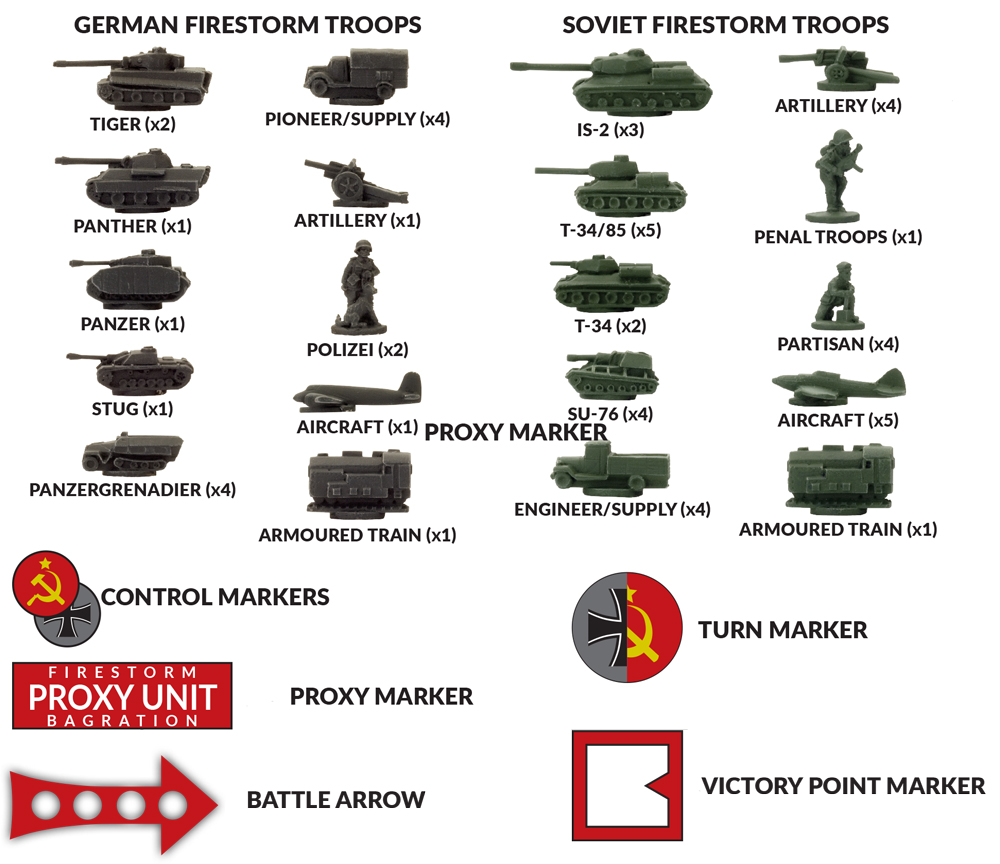 These are extra troops you add to your battles. They are limited resources but are in addition to your selected army. Here you can concentrate your effort and use your most powerful units for your main attack or defence. These Firestorm Troops represent your main divisions and corps:

These Firestorm Troops add a lot of flavour to the games and may also give one side a slight advantage as their Firestorm Troops give one side an numerical advantage without being too overpowering. Unlike normal games where both sides are selected to a fixed points system, these units are then in addition to the selected forces. The smaller the game, the more effect they have. The Firestorm units take some getting used to, but are an essential part of the campaign. If you always play with equal forces then the front lines are not going to change much during the campaign. The advantage the Firestorm Troops give you in you battles can be crucial. It also means both sides must husband these valuable resources and use them wisely.

On the Firestorm map there are also other considerations, you must keep your lines of supply open and at the same time cut of the enemy and isolate his forward units. Team work is encouraged and the more work you put into the campaign the more fun it is.

The rules are straight forward and simple. Each turn has three phases. A Planning Phase, where you prepare each turn and plan your battles. A Battle Phase where you play your Flames of War battles according to what is happening on the map. Then finally a Strategic phase where you work out the end of each turn. Firestorm: Bagration is designed to work with your Flames of War games and has turned out to be a successful medium for campaigns. 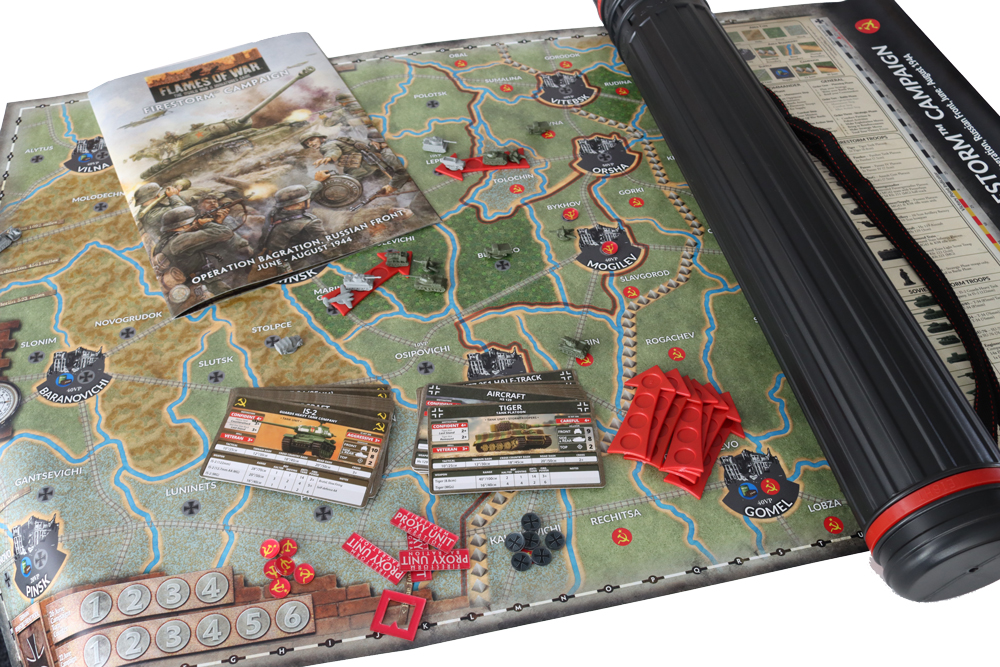 While the German defence will be desperate the Soviet forces are under pressure to press on swiftly and capture key locations or else the Germans will win on victory points. So even if historically Operation Bagration shattered Army Group Centre the Firestorm Campaign gives the German players a chance to reverse the outcome.

I have some experience with Firestorm Campaigns having written six that can be found on the Flames of War homepage. (Did I mention I think the historical aspect is important?). And I have run a few campaigns.

Tip 1. Decide on how long you intend to play each turn. A week per turn seems to be about right. Firestorm: Bagration has two game lengths, 4 turn version and a 6 turn version. I would recommend that newcomers to Firestorms start with the shorter game. You can replay the game later in the longer version once you have become more familiar with how the system works.

Tip 2. Have a fixed total period for the campaign. One of the biggest dangers of campaigns is that they become to long and players start to lose enthusiasm for the campaign and it peters out. By having a set time-frame it is easier to maintain interest.

Tip 3. Have two clear chiefs in command for both sides. These will need to put in a little extra work and also an opportunity to shape the larger strategy. I would strongly recommend that you allow everyone to take part in the decision making, but it is also important that they take the initiative as required and these are also the players that make sure that the campaign map is updated as needed.

Tip 4. Remember that you should have fun. I find it helps to think of Firestorm games more like narrative gaming that a straight win-loss scenario. The campaign should be fun the whole time. Like war it isn’t fair, but fighting a desperate battle is a rewarding gaming experience.

I am excited to see Firestorm: Bagration re-released and updated with the newest version of Flames of War. For me it is like meeting an old friend and is, in my humble opinion, easily one of the best ways to play Flames of War.

To newcomers I say, try this. Firestorm: Bagration adds historical depth to your games and is a great way of expanding your gaming experience to include the historical aspect. Seeing you armies move around the map, the names of far away locations will have a reference and maybe encourage you to learn a little history while you play.

Click here to Order Firestorm:  Bagration in the Online Store…