With each release, I look forward to seeing what looted vehicles might be available, where I could add some flair or flavour to my armies by adding these captured vehicles to my arsenal.  I have added a captured Sherman Firefly to my German Beach Defenders list, and, an absolute no brainer with my Soviet forces taking the Decoy Tank Company with either Tiger and two Panthers or just all Panthers.  With this release, we have some captured Soviet tanks that we can include in our force via three command cards.  If you have some spare points, consider taking one of these command cards:

Looking at the looted T-34 command card first, we can take a single tank and we have a choice of either a T-34 (76mm) for 3pts or a T-34 (85mm) for 4pts.  This tank is an independent tank team and is Confident, Aggressive, Trained.  For me, it is a no brainer to take the T-34 (85mm).  A single fast tank running around with FA6 AT12 for 4pts can be quite handy depending on what type of list you like to run.  I think it could work well with either an infantry or recon list to provide some mobile teeth. We will explore a list later in the article. 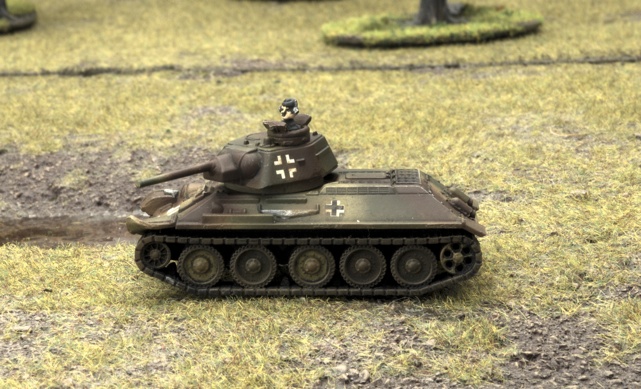 The looted SU-85 command card allows you to take a single SU-85 assault gun for 5pts.  This tank is an independent tank team and is Confident, Aggressive, Trained.  Being an Assault Gun and hull mounted, it is probably more suited to a defensive list as it has a useful AT12.  In fact, if you wanted, you could combine the two cards for 9pts to give your force a couple of mobile AT12 platforms that could help secure both flanks whilst waiting for the bulk of your heavy tanks to arrive from reserve.

The final command card, the T-34 Security Tank Platoon, gives you an option to field three T-34 (76mm) for 8pts or four for 11pts.  Again, the ratings are Confident, Aggressive, Trained (with tactics 5+).  This gives you a cheap mobile AT9 unit that can serve as a second tank platoon if you only have one of the heavy tanks.  Useful to have a mobile on-board reserve to protect against any recon or light/medium tank forays into your backfield or use them as bait whilst you maneuver your other mobile forces into position for the flank shots or assault. 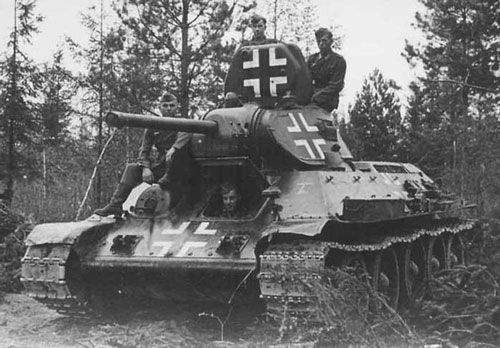 So, let us look at how we could create a list where you can add these into your force.  For this article, I am going to look at the humble Grenadier Company.  It has the least of formation options compared to the other infantry formations, so I think the looted cards will fit in nicely here.  The formation consists of:

Looking at 105pts I would look at taking as many units as possible for the formation break and adding some heavy firepower in the form of Panzer IV/70s and rounding out with looted tanks. 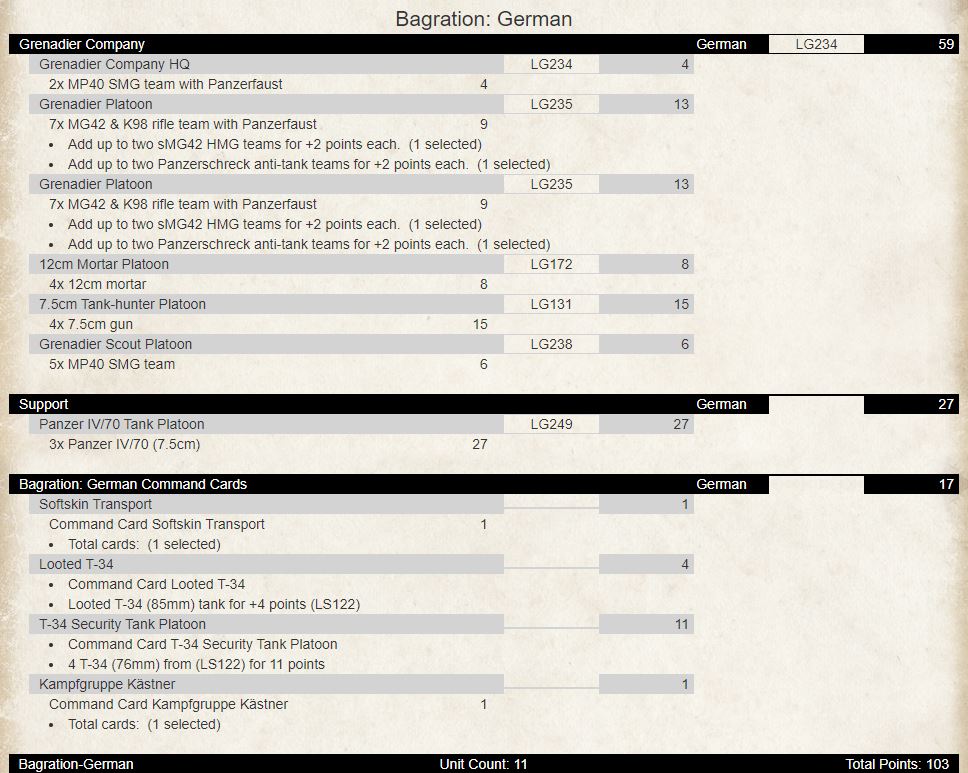 This may look like a compact infantry force but is relatively strong with six units for the formation break.  The core for this formation is the two Grenadier platoons.  They can hold your objectives defensively or use them to support the Scout platoon, who with the Scout and Spearhead ability, sneak into positions to assault the enemy off the objective.  The 12cm mortars provide the ability to pin or remove enemy infantry and gun teams and support your attacks.  The anti-tank guns can be put in ambush or with the Soft Skin Transport Command Card, be brought on from reserve if required.  Panzer IV/70s are your heavy AT to deal with those pesky IS-2s.  The T-34(85mm) provides some AT cover on the other flank to the Pak 40s and the T-34 Security Platoon can be used to plug gaps, provide support for your grenadier assaults, or last-ditch attempt to assault infantry off the objectives.  The Kampgruppe Kastner Command Card gives you the ability to use the Night Fighting rules if you are the attacker in a mission where the defender has minefields.  This means the units in your formation get to move freely out of their deployment areas whilst night.  This gives you the advantage to get your infantry into a position to assault early in the game under darkness!

With painting these tanks, you can either paint them green with German markings and have them stand out in your force of camo German gear or you can also have fun painting them in the same (or different!) German camo schemes for late war.

There is a place for taking looted tanks depending on your playstyle or list – have fun adding them to any of the lists in the release.  I love the T-34 Security Platoon and will be painting some up in German Camo for my Bagration forces.  You never know – they could give me that edge in my next game!