With new Tank-Hunter options available being released, I thought I would look at the anti-tank options available to support the force.  There are both self-propelled and towed guns and there are advantages to both depending on your points, force, and playstyle.

There are two anti-tank slots in the support section plus the heavy anti-aircraft slot (which can double as anti-tank guns).  This could give you the ability to take up to three platoons of anti-tank guns if you wish.   The chart below shows you the options for each slot:

As you can see, you can take dual 8.8cm Tank-Hunters or the Marder’s if it suited you. 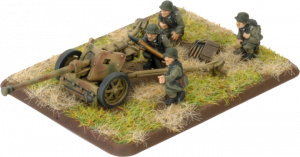 Starting off with the guns first, we look at the workhorse gun of the German army – the PAK 40 7.5cm anti-tank gun.  These are integral to most infantry formations as well as being available to the force here in the support slot.  This gun has a 32” range and packs an AT12 FP3+ punch.  Two for 7pts, three for 11pts, and four for 15pts.  Can take on most tanks and has a 3+ gun save making them harder to dig out. 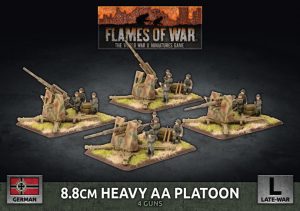 The next gun is the most recognised anti-tank gun of the war – the Flak 88.  This is a dual-purpose gun that can take on aircraft as well as tanks and commands a 40” range with a punch of AT14 FP3+.  Can take on all tanks – even heavy tanks. Two for 6pts or four for 12pts – a bargain, I think!  A 4+ save though, so need to be careful.  This can be mitigated by spending an additional 6pts on the Pak Front Command Card.  This turns the guns into individual nests (reroll FP to be destroyed), and you can string them out along your line to cover all firing lanes and deny parts of the board to your enemy.  This is one of my favourite combinations for four guns and a card costing 18pts.

The final gun is the crucible mounted long Pak 43 8.8cm gun.  You can command the battlefield with this beast of a gun with a whopping 48” range and AT17 FP3+.  Combine a platoon of these with the Pak Front Command Card to dominate the table.  An alternative would be to take dual platoons and then cover both sides of the board with the massive range of the gun.  With AT17 you can pretty much put down any tank you hit – even at range.  The only vehicle you cannot penetrate from the front is the Elephant which I talk about a bit later.

Looking at the self-propelled options now, we look at the Jagdpanzer IV.  Mounting the shortened Pak 40 gun 7.5cm gun it has the same range of 32” but slightly less AT of AT11 FP3+.  This vehicle is the precursor to the Panzer IV/70.  FA7 which is reasonable and like a Stug.  SA3 which with the Bazooka Skirts rule means it goes to 5 ifs being hit with 5+ FP weapons such as Bazookas, PIATs, etc.  Two for 11pts, three for 17pts, four for 23pts.

This brings us to the Marder Tank-Hunter.  Mounting a Pak 40 7.5cm gun onto a Czech 38(t) hull, this is the final evolution of the Marder Tank-Hunter series – the Marder 3M.  With FA1 and SA1, you will not win the armour contest, but the best armour for Germans is Careful and the Stormtrooper ability.  Blitz out of cover, shoot full ROF and Shoot and Scoot back into cover.  Two for 8pts, three for 12pts, four for 16pts.

Next up is the Hornisse Tank-Hunter mounting the Pak 43 8.8cm anti-tank gun on a Panzer IV chassis.  With only FA2 SA1, you will be relying on the cover and being careful to keep them in the game.  Fortunately, the gun’s long reach and penetration mean they do not need to close with the enemy.  To me, this is the cheap man’s high end self-propelled gun, but if you use them well, they will pay dividends – same philosophy as the Marder’s – use your ability to Blitz followed by Shoot and Scoot.  Two for 16pts, three for 24pts, four for 32pts.

Rounding out the heavy hitters is the monstrous Elephant. Sporting the Pak 43 8.8 anti-tank gun and FA16, you do not need to hide with this beast!  Pretty much impervious from anything in the front, you still want an infantry screen to protect it from the flanks as whilst it has SA7, there are several vehicles out there that can a side shot and take it out.  Protect the flanks and watch these beasts get to work on enemy armour.  They can also assault on 4+ – handy to clear off an enemy dug on an objective if no other assault force handy!  You can also take just one if you want to add that sniper ability to your force for 15pts.  Two for 29pts, three for 43pts, four for 57pts.

So, depending on what you take in your formation(s), the force anti-tank slots can give you some extra oomph to take on the enemy depending on your preferences.  For Bagration battles, you want at least AT14 as a minimum in your force.  If you are not taking any AT14 in your formation units, then I recommend at least the Heavy AA Platoon and ONE AT17 unit – whether it is the Elephants, Hornisses, or Pak 43 Anti-tank guns, especially if you are facing Front Armour 10 IS2’s!

In summary, the Germans get some new heavy AT options to choose from with this release.  Choose the best unit that suits your requirements and cost to fit into your force and enjoy list building!