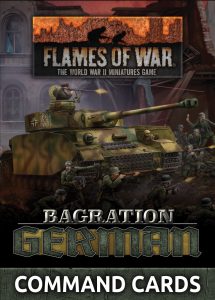 As you might expect, the Bagration: Germans have many of the same Command Cards as other nations like Softskin Transport, Lucky, etc. However, you will also find a great variety of cards for Warriors, Unit and Formation builds, as well as cards that enhance a particular part of your Forces capabilities. You will find plenty of flavourful cards as well to give your force a feel all of its own.

(Click on the images to see a larger version)

As an example, there are a number of different Divisional theme cards. Some do simple things like the 4th Panzer Division Kampfgruppe card that lets you field a Grenadier or Panzergrenadier Platoon instead of an Armoured Panzergrenadier Platoon in a Panther Tank Company or Panzer IV Tank Company. Others modify the ratings like the 16th Panzer Division Rebuilt card which drops their Tactics rating to 4+ for -1 point per Unit. The Kampfgruppe Kästner card allows a Grenadier Company to conduct a night attack in the right circumstances.

There are even cards for making a couple of Waffen-SS options. There is a series of cards for making your armoured troop represent the 3rd and 5th SS-Panzer Divisions, upgrading their motivation to Fearless. For something a little different, you can take the 20th SS-Volunteer Grenadier Division 1st Estonian. This card lets you field a Grenadier Company rated Fearless Trained Aggressive with Tactics 3+.

There are also a number of Unit build cards Panzer Pioneer Platoon that converts your Armoured Panzergrenadier Platoon into pioneers. To go with this is the Stuka Zu Fuss card that fits heavy rocket launchers to your Panzer Pioneer’s Sd Kfz 251 half-tracks.