Early on in World War II, Soviet commanders started attaching units of infantry, primarily armed with sub-machine guns to their tank forces.  These troops became known as tank riders because they often rode on top of the tanks into combat.  This allowed them to use the increased mobility, and partial protection to get them to the hot spots in the fight.  The tanks in turn benefitted from this by having infantry support close at hand to ward off any enemies that came too close.  As often is the case, any successful idea usually gets copied and the German forces soon duplicated this approach with the Begleit, escort tank riders.  These tough soldiers rode into battle on the fearsome StuG Assault Guns and were heavily armed with the new StG 44, the first true assault rifle.  With the launch of the new Bagration: German book, these troops can now be added to your Axis forces in Flames of War.  In this article we will take a closer look at these unique and powerful warriors and discuss how you could build a 100 point force around them. 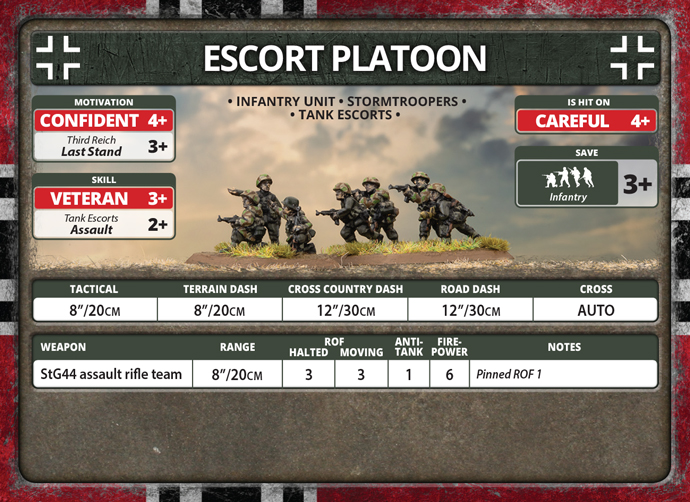 At first glance, you will notice that the Escort Platoon boasts the same excellent stats as most German infantry.  A Hit On Value of 4+, Motivation of 4+ and 3+ Last Stand are the hallmarks of German infantry and any Axis player will know this well.  But on top of these solid stats, the Escort Platoon has a few additions.  True assault infantry has been absent from German formations since Mid-War, so the Escort Platoon is a welcome addition.  Not only do they have the StG 44 assault rifle which functions as a range 8” submachine gun, but they also have an assault rating of 2+!  Few units compare to this power in close combat and should strike fear into your opponents.  To make the unit even more formidable it comes in platoons of either 7 or 10 stands.  These are very large unit sizes for Axis players.  It is staggering to think that an Escort Platoon could make a tactical move, fire up to 30 times then charge into an assault, hitting on a 2 plus, all in one turn.  Lastly, and most importantly, the platoon has the Tank Escorts special rule that allows the unit to charge straight into assaults from the StuGs or StuHs they are riding on.

You have to take the good with the bad and the Escort Platoon has a few drawbacks that need to be discussed.   In exchange for its considerable advantages, the unit takes a hit in the form of points cost and flexibility.  At 13 points for 10 stands the escort platoon is simply a very expensive unit to include in most army compositions.  Additionally, they are not a black box choice so in order to take them you have to commit to taking an entire Assault Gun formation.  This makes the entire army’s composition very predictable and the assault guns, though good, might not be the first choice for most players in Late War (where their FA of 7 and AT 11 gun are pretty average).  The Escort Platoon has no upgrades to add additional weapons such as Panzerschreks or Panzerfausts.  This means that the Escort Platoon will be extremely effective against infantry but won’t be assaulting enemy armour except in the most desperate circumstances.  Lastly, in Flames of War, most assault troops have access to Flamethrowers and the Escort Platoon does not.  This means that when you are attacking opponents in buildings or foxholes, chances are most of the damage you will be dealing will be based on your 2 + assault rolls, not your preparatory shooting.  An astute commander will need to rely on the synergy between the nearby assault guns and his Begleit troops when enemy infantry is well prepared or there is substantial armour nearby.

As detailed above, adding an Escort Platoon to your force requires the addition of a StuG Assault Gun formation making army composition fairly static.  This however this does not make the army weak as the StuG is still a fairly solid choice in Late War.  Here is a sample army I would consider fielding:

This list tries to achieve some balance while maximizing the use of the Escort Platoon.  The main strategy would be based on aggression.   Choosing to attack whenever possible.  This way the Wespes can lay down smoke to cover the advance of the StuG, and the StuHs are available to handle dug-in units.  The Tigers are there to deal with any serious high armour opponents may have while the Quad Halftracks ward off aircraft and guard objectives (along with the Wespes).  Once the Assault Guns are close to their targets they can unleash the Escort Platoon straight into the assault using the Tank Riders Rule.   From here the Escort Platoon’s high rate of fire and 2+ assault value can be used to maximum effect.  In the event that this force must take reserves, holding the Tigers and one Assault Gun platoon back uses exactly 40 points.

Hopefully, this article has provided you with some ideas of how to use the Escort Platoon in your games of Flames of War.  Being a totally brand-new type of infantry that German players have not had access to before, makes these troops a new challenge and fun option that both Axis and Allied players alike will have to adapt to. Now it is time to get your copy of Bagration: German, load up on StG 44s, and ride into battle!