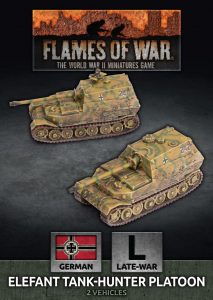 Finally with Bagration: German one of the bigger tank-destroyers is going to return to the battlefield. We have all been waiting since Fortress Europe, D-Day: German, and D-Day: SS is missing it. I love this tank and I don’t really know why maybe for its shape or probably since it’s too big to be real.  So in this article, I’m going to show you the Elefant’s characteristics, the unit size, and its cost. We will also have a look at its tactical use in every kind of list.

The Elefant is very similar to the Ferdinand we got in the first late-war book but has received some important buffs. The front armour has moved from 15 to 16 which probably doesn’t represent a big change since there aren’t many weapons that can hurt this monster shooting from the front. All the Elefants I’ve ever seen destroyed were hit from its weak point on the side or top of the tank. Given its armour rating on the top and side is “only” 7  it will be vulnerable from the anti-tank 10+ rating hits that are very common in the late war. 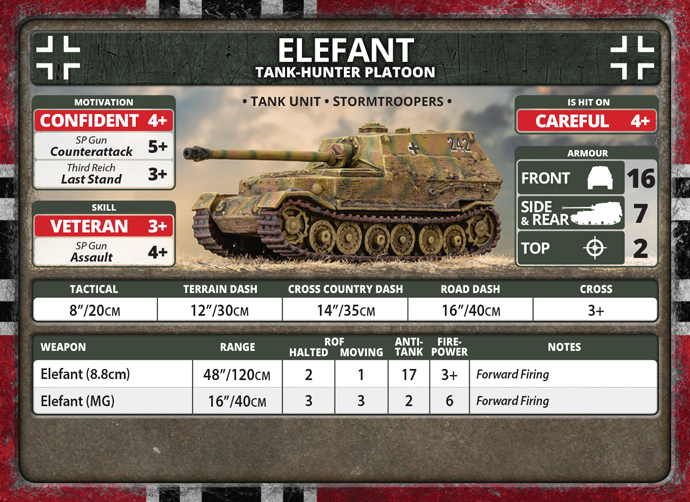 German players should be careful when moving this tank as it only moves 8”/20cm at tactical speed so the risk of being flanked is quite high. The cross-country dash remains the same, the terrain movement has been increased to 12”/30cm. This is interesting if you consider that the cross value has changed from a 4+ to 3+. Of course, moving this tank across a wood usually isn’t a good idea but sometimes it will happen, and a 16.6% extra chance to succeed helps.  From my experience on Flames of War battlefields, I’ve learned that the right position of this tank is very important. Due to their armour, they’re nearly invulnerable to fire at the front with the exception of an Aircraft attack, be sure to put them where aircraft need a +1 to range in. Be careful about enemy tank movement, consider their Blitz that adds 4”/10cm, and do not forget about reserves that come from the flanks.

The main gun is the same 8.8cm Pak 43 as the Ferdinand, this is one of the most lethal weapons in World War II. An anti-tank value of 17 means that almost every tank will be scared of it. The range is enormous: 48”/120cm. Yes, you can shoot at enemy teams from one side of the battlefield to the other, so don’t get too close to them because you really don’t need to! You can just shoot with your fire rate of 2 and enjoy yourself.  Looking at the weapons the most important addition compared to the Ferdinand is the machine gun.  Now the Elefant is finally able to add 3 MG shots during a defensive fire. That can sound not so important but can help when you are in trouble.

What about morale? Well, there’s a big change here because the Elefant is confident. That’s important if your tanks are bailed. Because the third Reich guarantees a 3+ last stand, however, we all know that a 3+ roll can be failed, and failing the last stand with such an important and expensive unit can be very unpleasant.

Last but not least the rating has changed from an Aggressive 3+ to a Careful 4+, it doesn’t matter if the fire is coming from the front since the armour there is almost impenetrable, but this is important for aircraft bombs or rockets as they target the Elefants weak points. It can also help if you fail to correctly position your Elefant and the enemy flanks you.

Obviously, all these improvements do not come for free. The Elefant costs 15 points rather than the 13 of the Ferdinand. All considered 2 extra points is not much and this heavy tank-destroyer is still a good choice for almost any German list. The Elefant is definitely the better choice over the Ferdinand due to its better morale and its hit value. 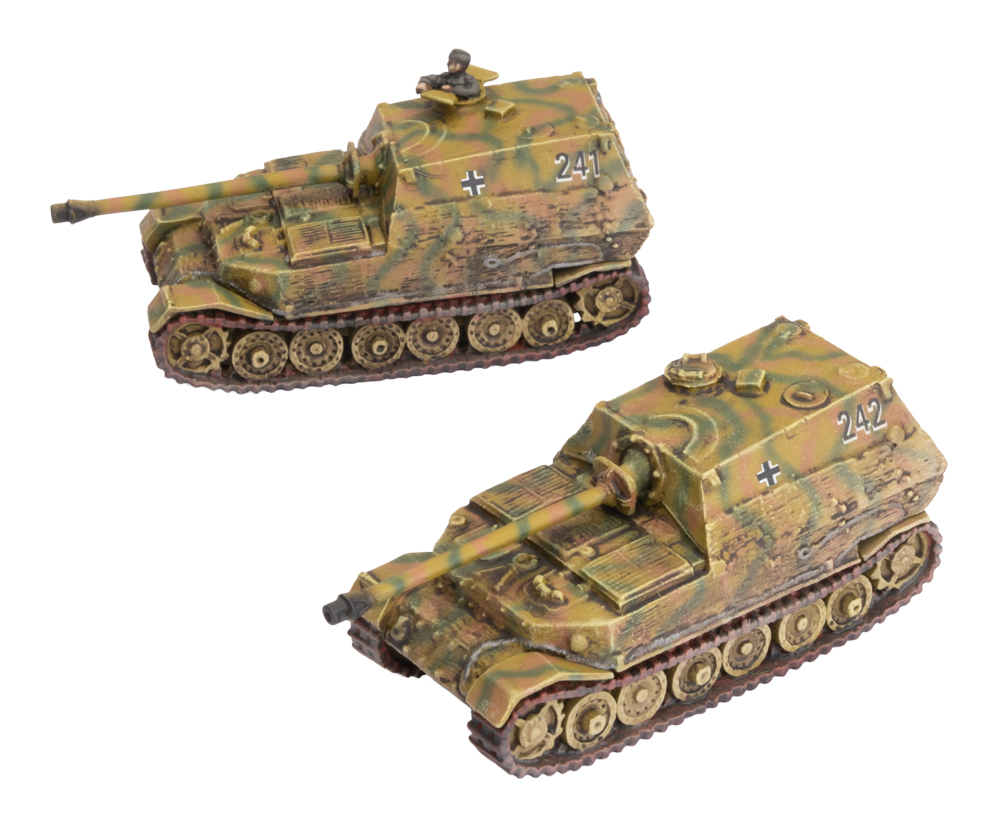 Unit size is very important when investing 15 points in a 100 point list but investing 30 or more points? These are some very expensive tanks. However, the unit size is 1-4 tanks so you will be able to deploy an Elefant and still have a good amount of points for almost any kind of list.

The Elefant in an Infantry formation

Here we go! This is the perfect support for any infantry formation and makes a great focus for other units to pivot around.

The reason this works is quite simple: tanks cannot destroy it and usually not even bail it. Thanks to the Anti Tank 17 of the main gun if the Elefant hits its target, usually, the target is destroyed after its firepower check which is 3+. Deploy your tank behind the infantry to provide defensive fire, this can be useful and would guarantee 2 more shots against assaulting tanks. Against assaulting infantry this is less important, but not at all insignificant.  Don’t forget to check if your Elefant is too close to the enemy and watch your flanks. Usually, the defender is just 60 points for deploying his units at the start of a match. If the Elefant is deployed the defender still has 45 points for  HQ, one infantry, one artillery, an anti-tank gun unit, and maybe something else. This should be enough but be sure to deploy your  Elefants to maximise its hit points in your match.

The Elefant in a Tank Formation

The Elefant has good support for tank formations, it provides heavy anti-tank support exactly where you need. Panzers often have to stop their advance due to a heavy tank platoon that places itself on its objective. This is particularly true if you are playing a medium tank formation that deploys a lot of tanks that lack the heavy anti-tank.The advantage of using an Elefant instead of a 8.8cm gun battery is that nobody can escape forever.
As long as you keep your flanks safe you’ll be able to advance and hunt tanks.

In a Tiger or Panther formation, the Elefant still has a role Why? You know that the front armour is 9 and the tanks are quite effective with shots coming in at anti-tank  12 or less. You should also consider that all armies have a solution for this by fielding anti-tank 13 or 14, so your Tigers and Panthers will not be tough enough to take these head on without taking casualties. In this situation deploying an Elefant can make the difference. Take the IS-2 for example they are a match for tigers, but are good prey for Elefants who take them head on. 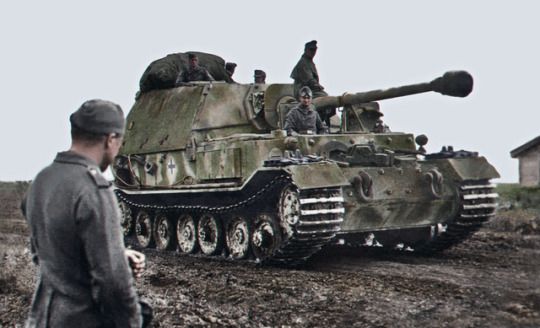 We said that Elefant units are a support unit with a unit size of 1-4. Thanks to the Bagration: German Command cards there is also the opportunity to play a formation entirely composed by Elefants! Once the Ferdinands were refitted in January 1944, the new tank-hunters were all transferred to 653. Abteilung. This formation is made by a HQ, that can be from 1 to 2 Elefant, and 2-3 Elefant units. We should also note that Elefant units in a 653 Heavy Tank Hunters Battalion have a size of 2-4. So you must play at least 5 Elefants, but the good news is that you still have 25 points to take both an infantry and/or artillery support, and maybe something else to make your formation more difficult to disband like an anti-aircraft support unit. I played a similar list in mid-war, using 5 Ferdinands. Despite potential shortcomings, this list won one of the most important Italian tournaments in Milan, I can guarantee that it is not simple to use. Try it out and you might be surprised.