A nice surprise for this release is the T-55AM formation.  Now finally the Soviets have access to the T-55 at last.  You do not have to rely on allied formations to run the T-55 horde!  Not only that, but the Soviet T-55AM is better than the Warsaw Pact T-55AM2.  As a Soviet player, I can now run all the different tank options from T-55AM up to the T-80! 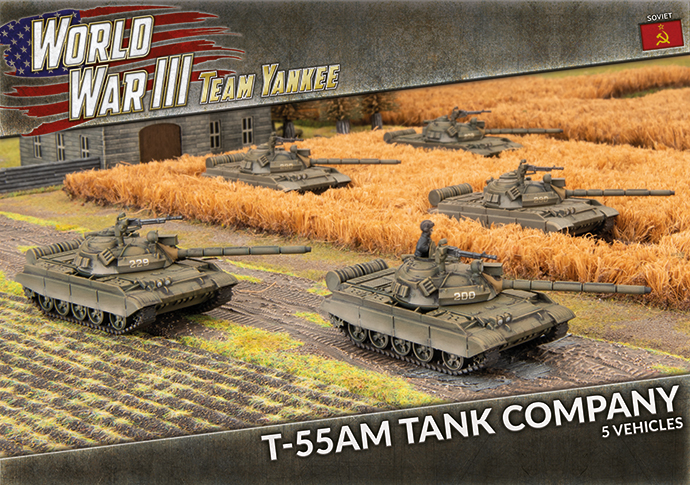 What does the T-55AM bring to the table over the T-55AM2?  No slow firing in the Soviet variant, main gun with higher AT and an optional gun tube fired missile!

The gun – 32” range AT18 with NO Slow Firing means moving up to 10” and able to fire its main gun on the move with no penalty.  So effectively its range is up to 42” if you move and fire.  Brutal – hit dug in infantry with it and that infantry is re-rolling its saves!  Laser rangefinder – No +1 to hit targets over 16”.  Infrared – roll two dice and choose the highest die roll for shooting range at night. 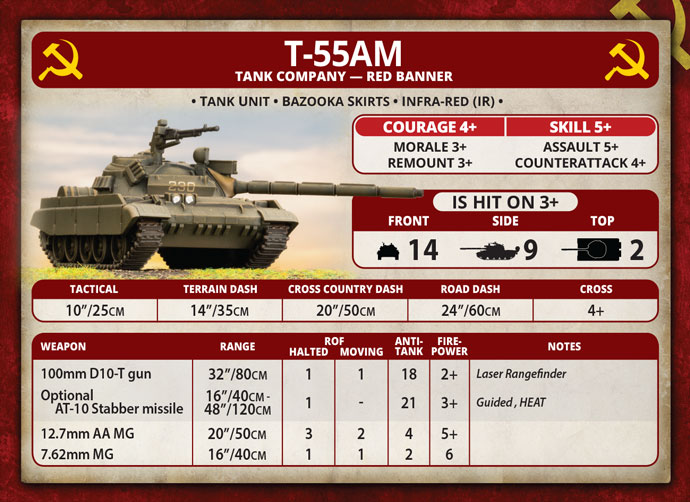 The armour – FA14 SA9 TA2 with Bazooka Skirts.  Most modern tank guns and missiles will go right through the frontal armour but has enough to stave off attacks from other weapons. Side armour is relatively decent and has Bazooka Skirts which means it goes to 10 vs HEAT weapons.   Against more modern infantry anti-tank armed units, it is still not going to stop it but against older weapons you have a chance.

The speed – 10” tactical speed means you will keep moving suffering no penalties for moving and firing.  4+ cross check which means you will pass them 50% of the time – so best not to rely on it.  14” terrain dash and 20” cross country dash if you need it – not as fast as the more modern tanks.

The stats – Skill 5+ so blitzing and shooting and scooting are not reliable orders.  Remount is a 3+ so easier to get back in.  Morale 3+ to stay in the battle.  Assaults are 5+ and counterattack on 4+ – so only assault if you really need to!  HQ has better stats of course so you want the HQ close by for the assaults.

Before looking at the formation and composing some lists, I want to see what the size and cost of the T-55AM Tank Companies are.  Minimum in a company is five tanks for 7pts.  Maximum is ten tanks for 16pts.  Each tank beyond the minimum is an additional 2pts.  The tenth tank is only 1pt extra.  So, if you are looking to run a horde army, you gain a point running maximum points.  If you want the optional missile its +2pts for the whole company – a bargain when running a large company of them.

Let us have a look at what comprises the formation:

With the low points for the volume of tanks you can take, you have a number of options for taking two formations of T-55AM or one formation with a secondary formation of say Air Assault Afgansty or BTR-60 infantry or even an allied formation, such as Iranian Chieftains.  With V2 of the rules, we can now take black box options as formation support – Shock T-80 Tank Platoon anyone?  Of course, you could just stack it with lots of support options, such as the new artillery (BM-27 Hurricanes, TOS-1), full complement of Hinds, Frogfoots – lots of combinations depending on your playstyle and budget.

We will look at various options for 120pts, 100pts and 75pts for running one or more formations.  Starting off with 120pts first let us see how this may play out: Dual T-55AM formations stacked with missile firing tanks, infantry with upgraded RPGs that can stand up to Tanks with AT19 against advanced armour in assaults!  Each formation is relatively strong with six units in each, two infantry companies to dig in on both objectives and if required, drive the enemy infantry off theirs.  Two artillery templates including the new BM-27 rocket launchers that can launch minelets to wreck the enemy’s backline.  Spearhead and AA coverage to go with your 44 tanks.  40 x AT21 missiles with your tanks will cause your opponent headaches.  You have some room to modify the list here – remove either some tanks from the companies and or missiles if you want additional AA coverage or another artillery template.  You could also make one of the infantry companies smaller and or downgrade all the RPG-7VRs to standard RPG-7s.

Let us see how it looks if we pair the formation with an Air Afgansty formation: 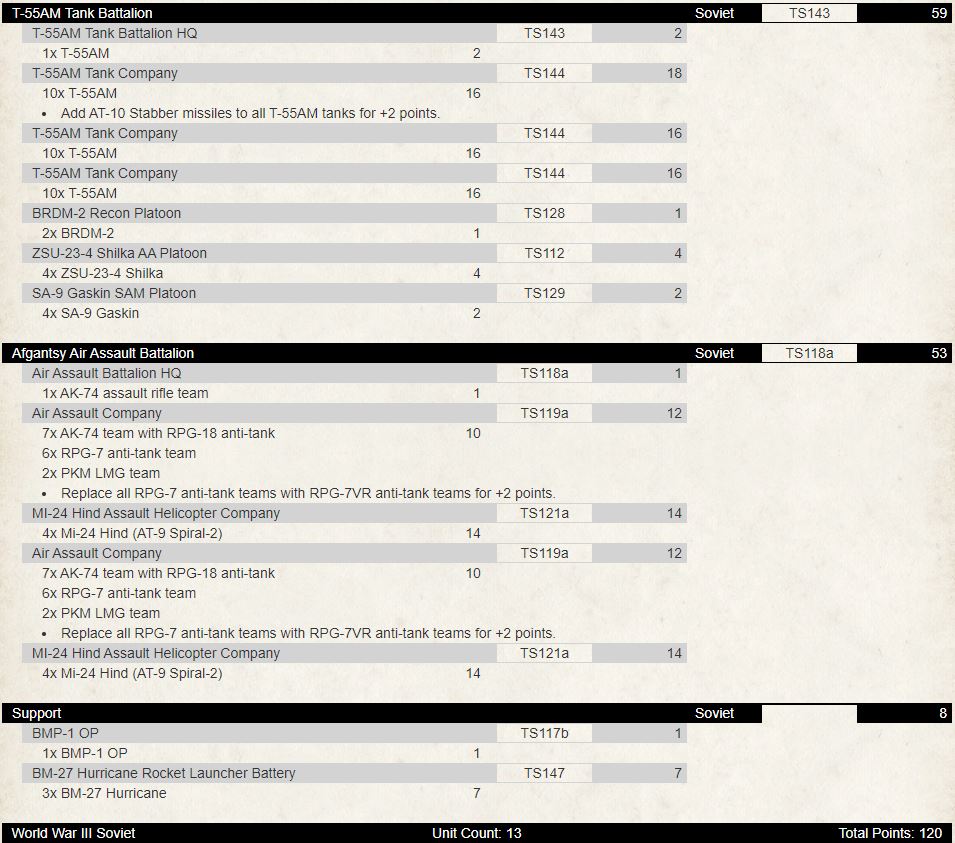 Running with 31 x T-55AMs (10 with missiles) you have seven units in the formation – very durable with AA and spearhead.  You get two companies of the best infantry (outside of Shock Motor Rifle Infantry) equipped with the enhanced RPG-7s along with eight Hinds with AT24 missiles!  BM-27s to fire salvos and minelets.

How could this formation work with black box units – let us have a look: 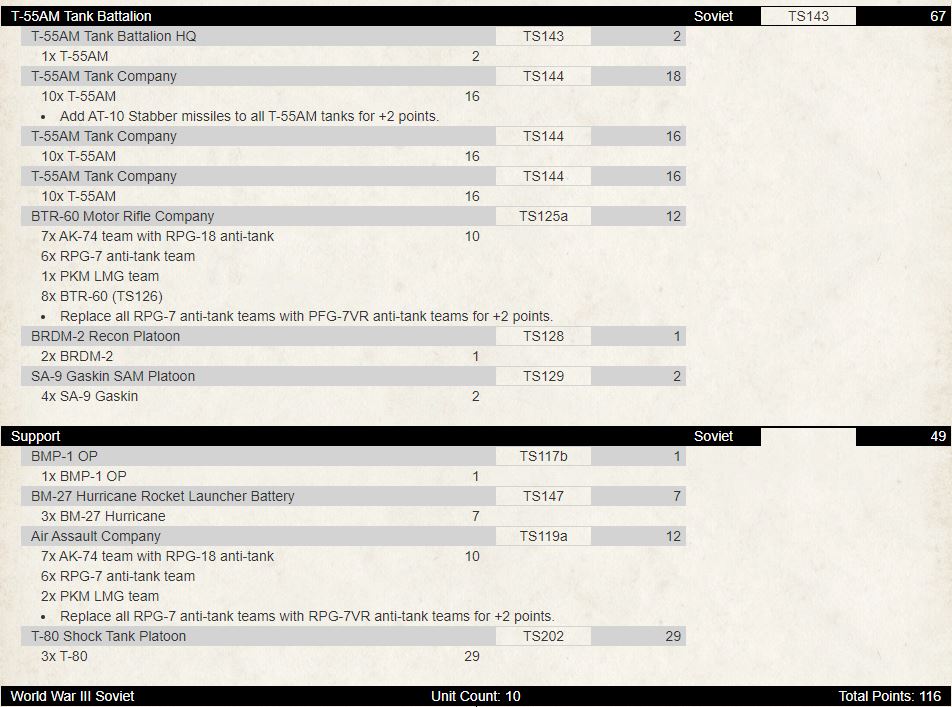 Running with 31 x T-55AMs (10 with missiles) you have eight units in the formation – hard to break and has AA and spearhead.  You have intrinsic infantry with the formation plus one company of Air Afgansty infantry for assaulting or defending the key objective.  Platoon of shock T-80s – hit on 4s – oh yeah!

Want more of the support options for a more surgical strike force – here is an option : 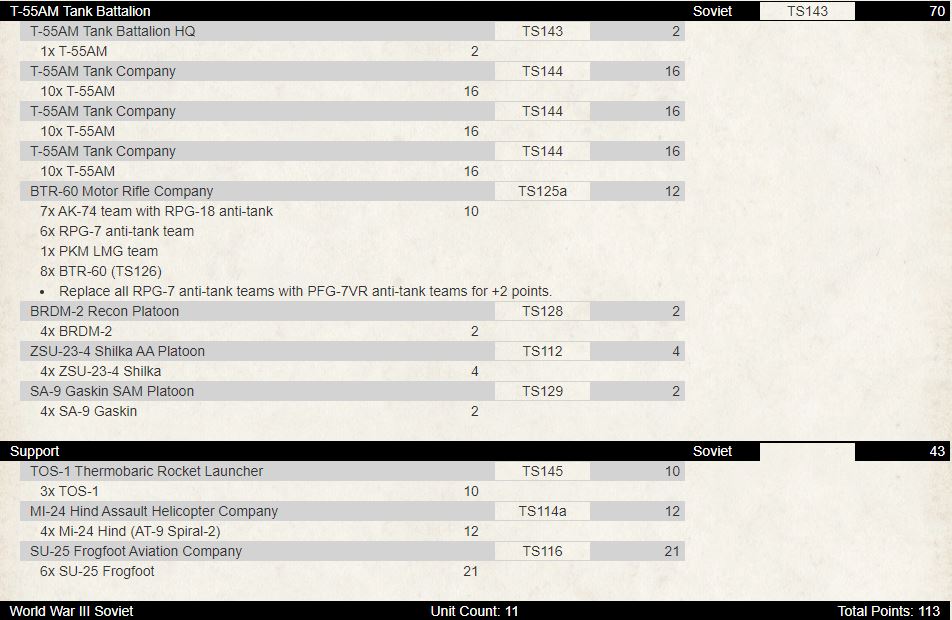 Your T-55AM formation will hold the field with eight in the formation with one infantry company to anchor it.  The TOS-1 is there to wreck infantry formations with its brutal salvo and auto firepower.  The six hinds with AT24 and six Frogfoots with AT27 are your surgical strike instruments.  Use your T-55AMS to bum rush your opponents AA so your air assets can rip apart the enemy armour whilst the TOS-1s suppress enemy infantry.

Looking to 100pts now, we could remove the Frogfoots, swap out the TOS-1 for BM-27s and add some Storms: 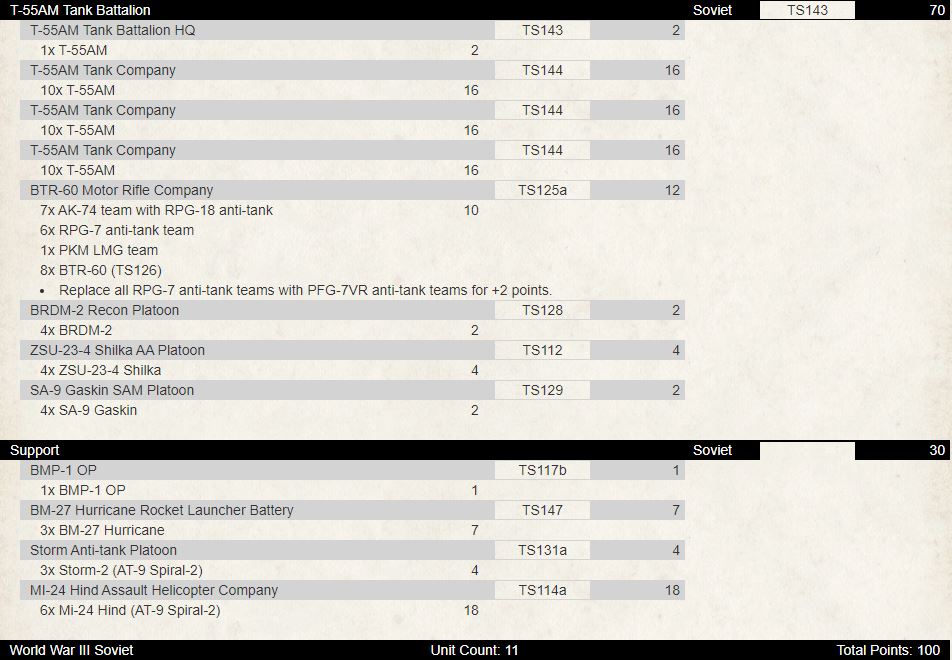 The Storms add more AT24 goodness.  Storms and Hinds are you surgical instruments for taking on high end tanks.   You could also change out the BM-27s for 2S1 Carnations or 2S3 Acacias to add missiles to one of the T-55AM companies to bolster your missile count.

For me, I find that running 10 tank companies are difficult to manoeuvre, so I prefer running them in units of 7-8 tanks.  This allows more tweaking of points to get other units I want for my force.  Here is an option that suits my playstyle: 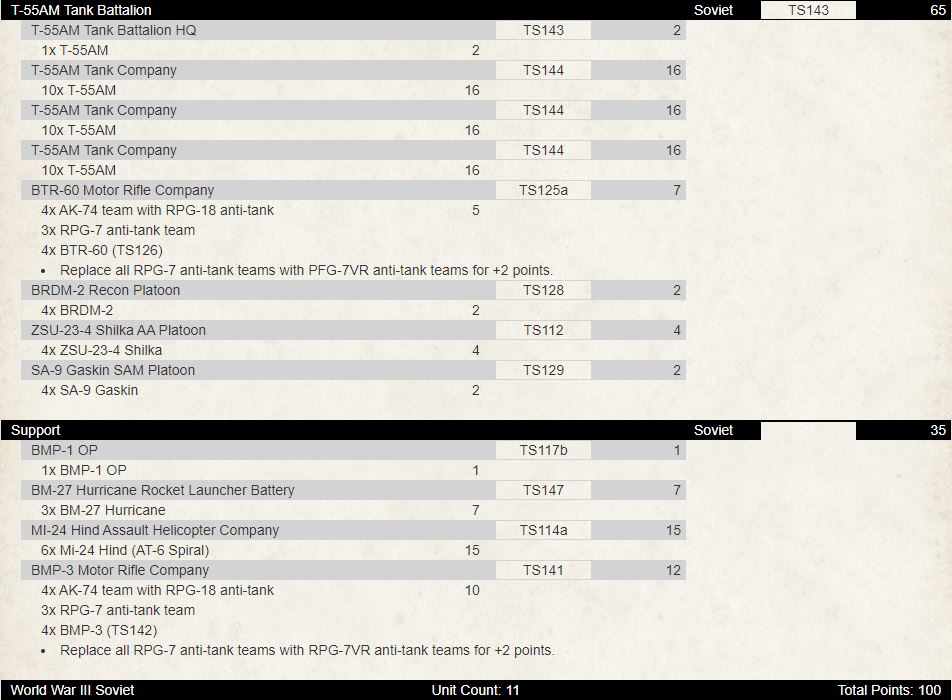 This list has two small infantry units, the formation still has eight units, and I can incorporate the new BMP-3 with its firing on the move AT21 missile! 6 x AT24 and 28 x AT21 missiles!  As you can see, you can tweak the T-55AM list to suit your playstyle at 100pts and 120pts.

Having played at NukeCon here in Auckland a number of weeks ago, I thought I would see if I could get a T-55AM Tank Battalion list together that I could have taken if it was available then (I took an Iraqi T-72M force – which was fun to play): 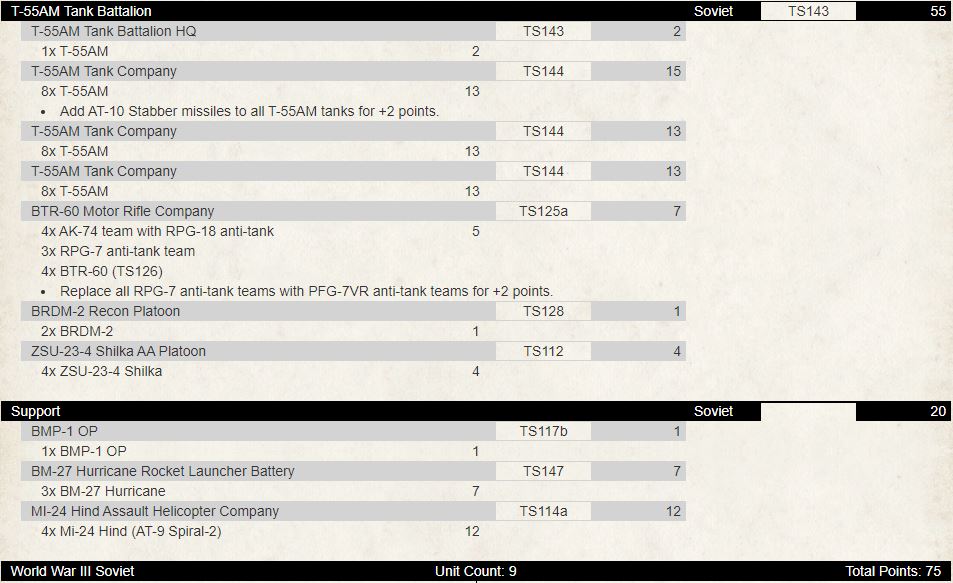 Still have 4 x AT24 take on the heavy tanks with back up of 8 x AT21 missiles.  Formation is strong with seven units.  AA in the form of Shilkas and Gremlin.  Smaller infantry unit but has the upgraded RPG-7VR so can hold off tanks in assault.  Use the remaining T-55AMs to bum rush the enemy (from reserve if required) or from spearhead.

So, there you have it – this formation gives plenty of options depending on your play style and the points you are playing to.  I love all the options you can add from either black box formation support or the support options.  The horde rides again!