Like most Soviet players, I have been eagerly waiting for the WW3: Soviet release to usher in the new toys for the Soviet players especially the T-80 and BMP-3 – to take on the NATO heavyweights such as Leopard, Challenger and M1 Abrams.

What is even better, is the release of the T-80 Shock Company in the book – finally a formation that is like most NATO lists – hit on 4+ – music to my ears.

Let us have a look at what comprises the formation:

The core fighting units in the formation are “Shock” units (hit on 4+).  Smaller more elite units that allow you to play NATO tactics with new Soviet equipment.   Let us look at these in more detail. 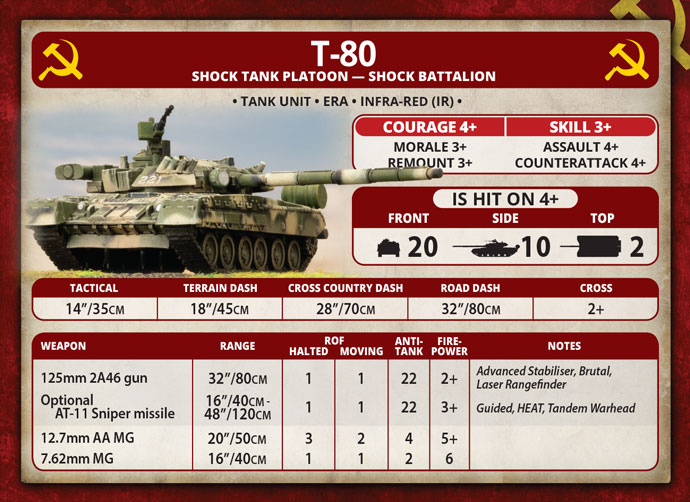 The gun – AT22 with advanced stabiliser means moving up to 14” and able to fire its main gun on the move with no penalty.  So effectively its range is up to 46” if you move and fire.  Brutal – hit dug in infantry with it and that infantry team is re-rolling its saves!  Laser rangefinder – No +1 to hit targets over 16”.

The missile – AT22 that can be fired on the move with 16” – 48” range increases with tactical move of 14” to 62” range!  Guided – no +1 to hit over 16”.  HEAT – no +1 to armour save for over 16” range.  Tandem Warhead – if target has ERA, it is ignored so use the normal armour rating!  For those missions where you have scattered reserves and they turn up at the other end of the table – no problem anymore with coming on at tactical and firing your missile giving you 62” range.

The armour – 4+ to hit FA20 SA10 TA2.  Finally, frontal armour on par with the NATO MBTs such as Challenger and M1A1.  SA10 with ERA (effective against majority of HEAT weapons by increasing to SA16). Your tanks will be almost impervious to most infantry AT – assault at will!

The speed – 14” tactical speed means you will keep moving suffering no penalties for moving and firing.  2+ cross check which means you will pass them 83% of the time.  18” terrain dash and 28” cross country dash if you need it.

The stats – Skill 3+ so blitzing and shooting and scooting are useful orders.  Remount is also 3+ so easier to get back in.  Morale 3+ to stay in the battle.  Assault and counterattack on 4+ – so get those assaults in and get them won!  HQ has better stats of course, so you want the HQ close by for the assaults.

The Company HQ comprises one tank for 10pts and can add an optional missile for +1pt.

The Tank Platoon comprises either two tanks for 19pts or 29pts for three.  You can add an optional missile for 1pt per tank.  You can also fit a Mine Plough to one tank in the platoon for +1pt.

This is the most exciting unit for the T-80 Shock Tank Company.  4+ to hit infantry!  Very hard to dig out and you have options to take a medium or small sized unit and choose to carry them in either BMP-2s or BMP-3s.  This is a hard-hitting unit that will be difficult to dislodge or conversely stop during an assault – especially if combined with your Shock T-80s. 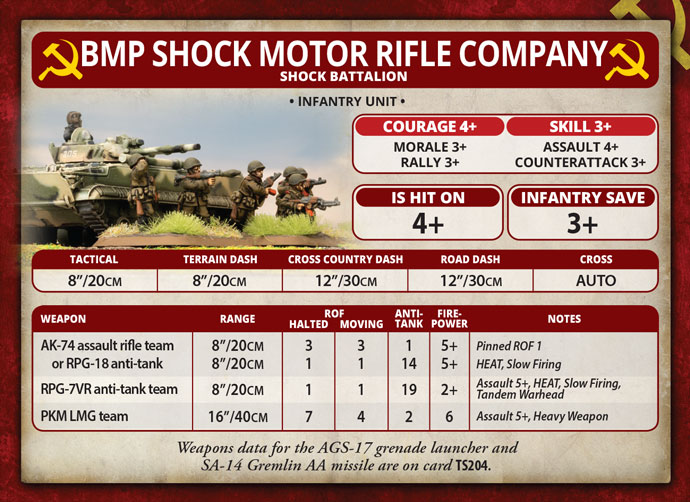 You can take either the medium size company for 24pts comprising of:

Or the small sized company for 15pts comprising of:

Options for either are:

This multi-purpose, multi-weapon platform gives you a lot of versatility – whether carrying your shock troops into battle or in the recon role with spearhead to get you assault force into a better launch position to get amongst it. 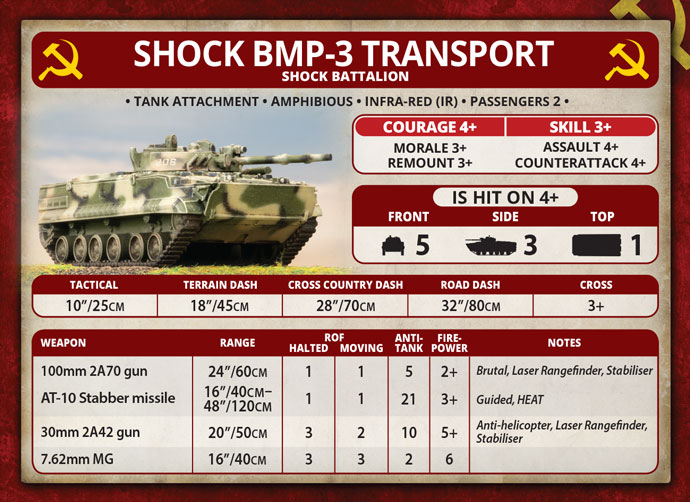 The guns – wow, two guns – a rapid fire 30mm cannon and a low powered 100mm gun for digging out infantry.  The 30mm cannon has a range of 20” ROF 3 AT10 with stabiliser, laser rangefinder and anti-helicopter!  Ideal for light vehicles, sneaky side shots into tanks and anti-infantry and helicopters.  The 100mm gun has a range of 24” ROF 1 AT5 with brutal, laser rangefinder and stabiliser.  Ideal for digging out infantry from their foxholes.

The speed – 10” tactical speed means you will keep on the move, suffering no penalties for moving and firing.  With stabiliser on both guns, this means you can increase your tactical speed to 14” with a +1 to hit over 10”.  3+ cross check which means you will pass them 67% of the time.  18” terrain dash and 28” cross country dash if you need it.

So, the BMP-3 can be used to transport your Shock Motor Rifle Company or in the recon role performed by the Shock Recon Platoon.  You can get three for 9pts or two for 7pts.  Recon platoon gives you spearhead in certain missions to get your troops into a better position to launch your attack.

Now the next part of the article is building lists based on the T-80 Shock Company for three different points levels (75, 100 and 120) to get some idea of core formation options plus what else you can add for flavour or to suit you play style.   With version 2 of the rules, we have black box units for formation support now – so that provides us some interesting options for list building.  On the flipside for this formation, we can now have a T-80 Shock Tank Platoon supporting other formations. 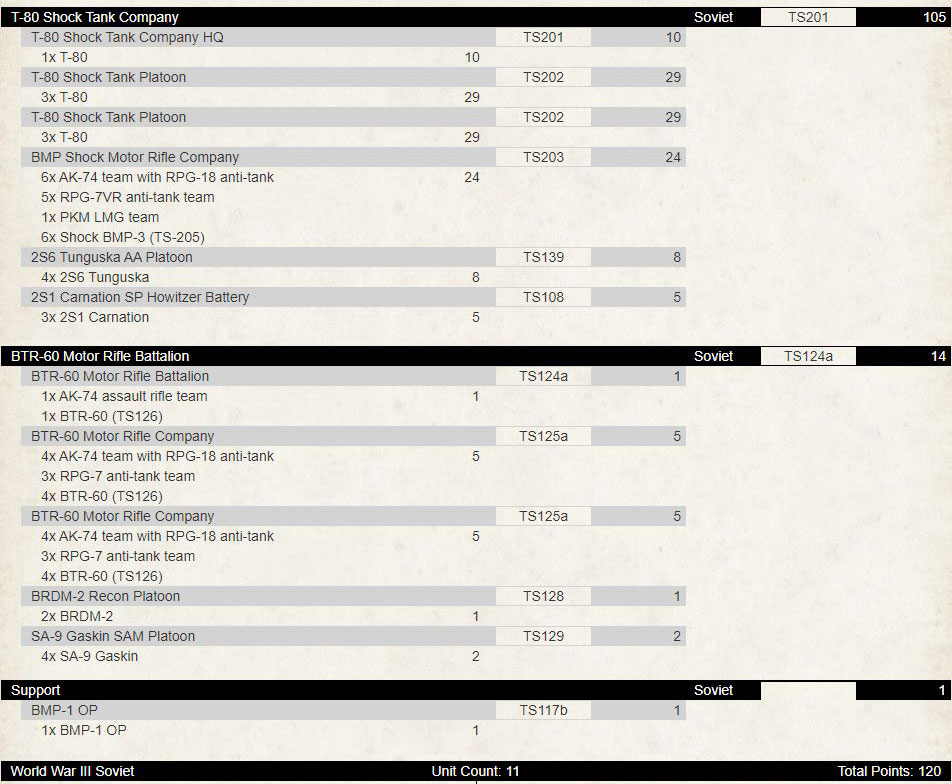 First option I look at is having a secondary formation for the extra 14pts.  It gives me a cheap spearhead option for my primary attack force to get into a better position for those missions that allow it.  I get two small infantry platoons to guard each of my objectives thus allowing my big Shock Motor Rifle Company to go on the offensive right away with my Shock T-80s.  I have AA coverage with the new dual weapon system 2S6 Tunguska and SA-9 Gaskin.  I have one artillery template (with backstop anti-tank if required with AT21 gun) with an observer to help range in better.  If you wanted a second artillery template, you could downgrade the 2S6 Tunguskas to ZSU-23-4 Shilkas and use the 4pts saved for a battery of three BM-21 Hail Rocket Launchers to complement your 2S1 Carnations.

Another option is adding black box formation support units to your force instead of a secondary or allied formation.  I like to run balanced forces and a second infantry option would be useful – Afgantsy Air Assault Company fits the bill nicely.  Outside of the Shock Infantry, it is the best Soviet infantry available with 4+ skill and assault and 3+ everything else. 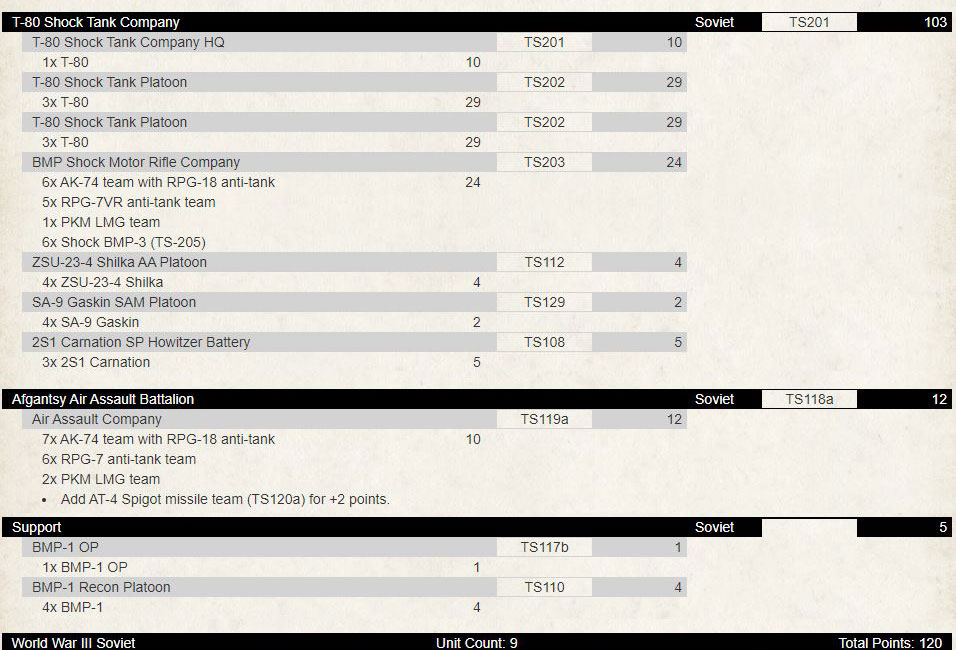 To fit in a medium Air Assault Company, and still allow the recon element, we downgraded the 2S6 Tunguskas to ZSU-23-4 Shilkas.

A third option where I do not want or need a cheap infantry formation or a second infantry company, but more surgical high-end firepower could be: 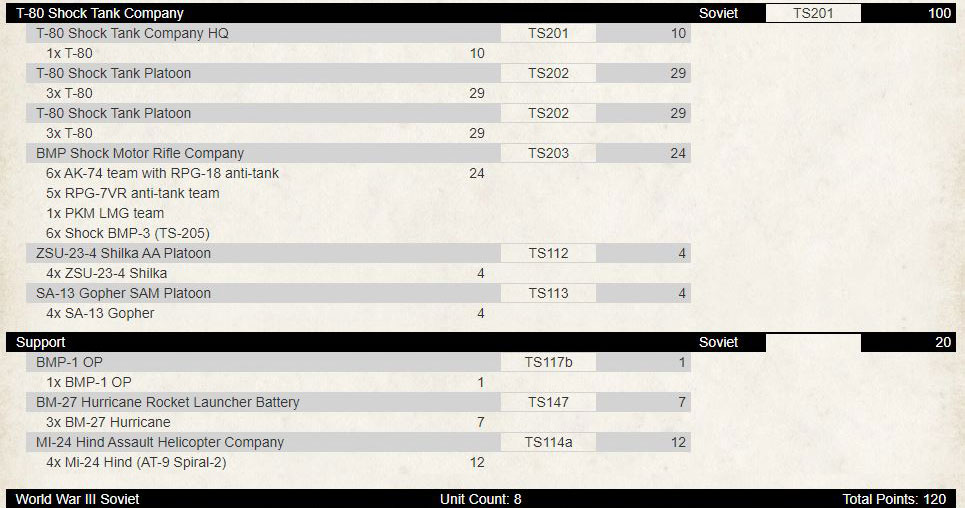 Adding in the BM-27 Hurricanes gives me access to minelets, which can ruin your opponent’s day plus with the salvo AT4 FP3+ makes it easier to shred their AA assets before you bring on your Hinds to kill their high end tanks with AT24 missiles, whilst your Shock T-80s and Motor Rifles mop up the rest and/or defend your own objectives.  Want a full complement of six MI-24 Hinds with AT24 missiles instead of four, downgrade Shock BMP-3s to BMP-2s for -3pts and downgrade the BM-27s to BM-21 Hails for -3pts to get those 2 extra helicopters.

Feel like adding some more tanks to the force?  We could add another new unit to supplement the T-80s – the new T-55AM.  A unit you can use to bum rush from reserves or use to try and flank opponents or with the optional missile hang back and have massed missile fire from range.  How could this look: 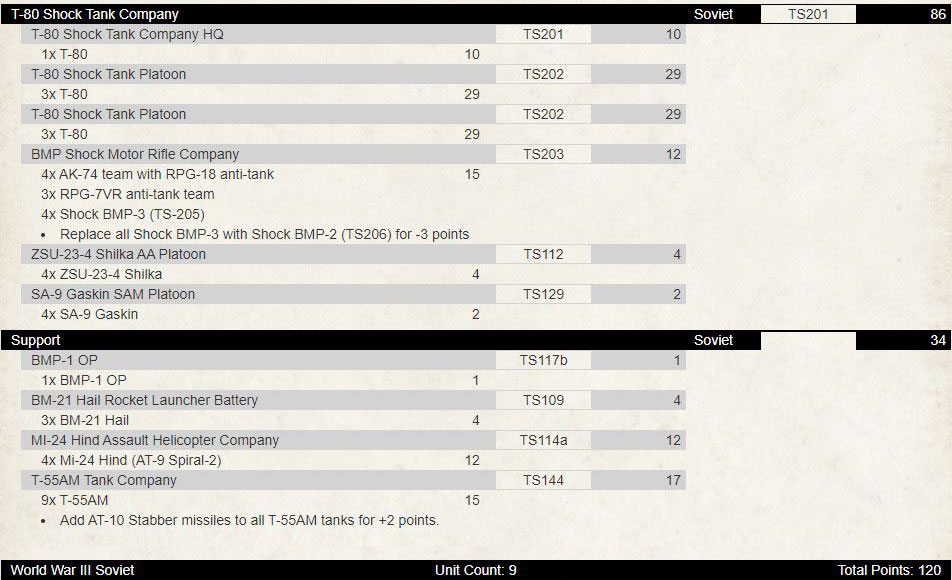 Tweaking the list by going with the small Shock Motor Rifle Company to add nine T-55AM with AT18 main gun (no slow firing rule!) and AT21 missile, gives you flexibility depending on the mission to outflank or hold back fire a missile barrage. 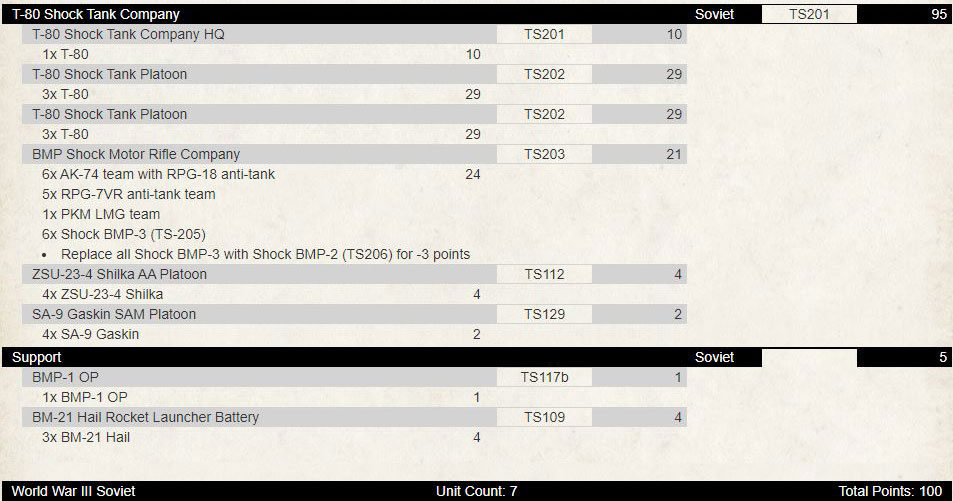 Downgrading the transports for Shock Motor Rifle Company, using SA-9 Gaskins and BM-21 Hails, we still fit everything in for 100pts.  Still a good list to play.  You have your shock elements with AA umbrella plus an artillery salvo unit with OP.  Here is an example list with the small infantry option: 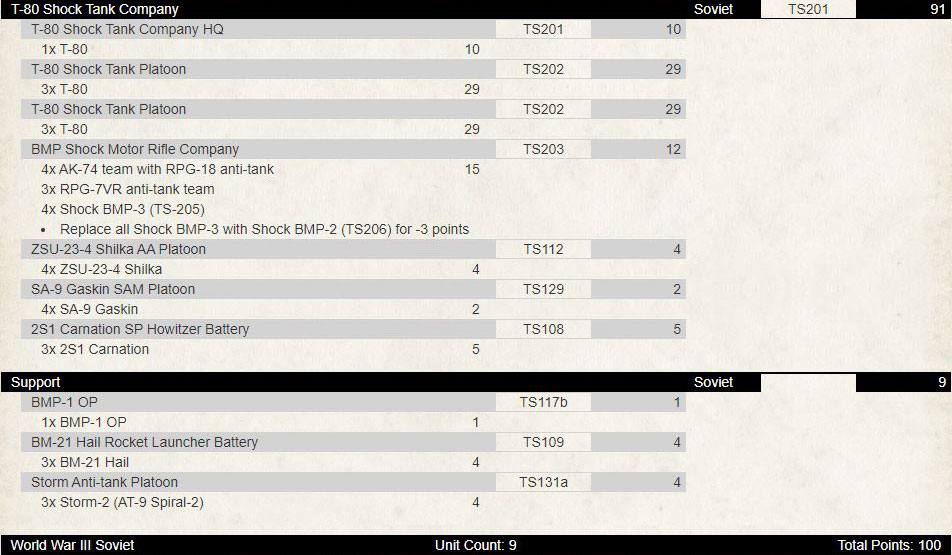 By going with a small unit of Shock Motor Rifle infantry, you can add in a second unit of artillery and a high-end anti-tank unit with AT-24 that you can spring an ambush from.  Another alternative is to replace one unit of artillery with either a BMP-1 or BMP-2 recon platoon from the support box option.  Replace the BM-21 Hails with four recon BMP-1 or the 2S1 Carnations with three recon BMP-2s thus giving your force spearhead.

Having played at NukeCon here in Auckland a number of weeks ago, I thought I would see if I could get a T-80 Shock Company list together that I could have taken, if it was available then (I took an Iraqi T-72M force – was fun to play): 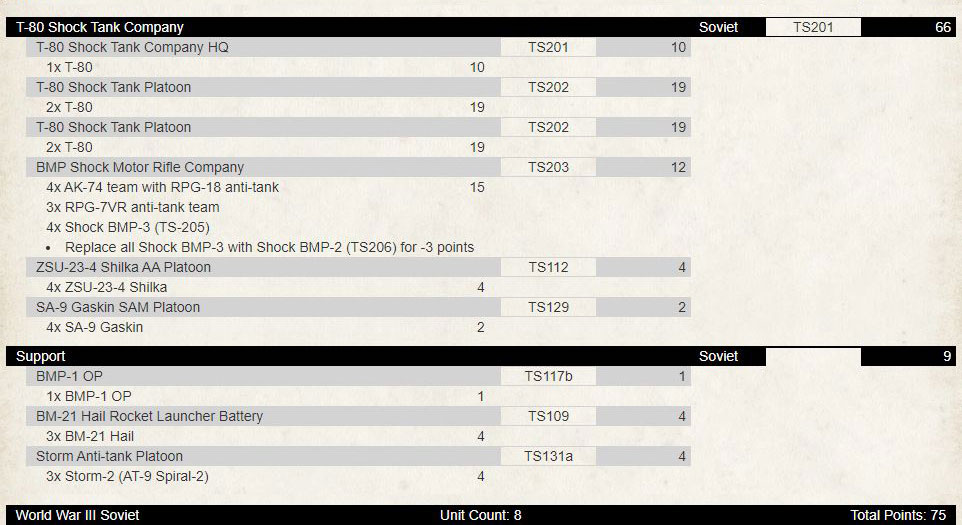 Taking the minimum T-80s you feel like a West German player taking Leopard 2s in platoons of two.  In this case it is definitely feasible – I would consider dropping the ZSU-23-4 Shilkas and getting recon BMP-1s to replace them in the support box option.  The Storm-2s give you AT24 – great ambush unit!

So, there you have it – this formation gives plenty of options depending on your play style and the points you are playing to.  I love all the options you can add from either black box formation support or the support options.  Do not forget you can also add allied formations too – Basij Infantry horde anyone?