I am new to WWIII: Team Yankee but have a few years of experience with Flames Of War.  During this time, I have really come to love how artillery works.  The idea that you can use it to exert your willpower across the table to make your opponent react to your plans is very cool and I think it adds a level of realism to the game.  The big guns can be a surgical instrument, a shield for your advancing units, or any other of a host of tactical options limited by your imagination, terrain and the opponent’s army composition.  So, when I was introduced to Team Yankee and saw the artillery weapons that are available in the system, I got pretty excited!  Now with the launch of World War III: Soviet we have a range of brand-new, excellent artillery options to consider.

In this article I would like to take a closer look at the mighty Soviet artillery Battlefront is about to unleash on the WWIII: Team Yankee battlefield.   The Soviets have a lot of units vying for the points allotment in a normal game and I am sure the lion’s share will be directed towards tanks.   Because of this, we should shed some light on these units so you can pick and choose which weapons are right for you and still come up with a flexible army list.

The Carnation is a good general option for Soviet Artillery.  In terms of special rules, it is pretty typical with an artillery template, Antitank 4, 3+ Firepower and Smoke.  In direct fire it is range 24 and AT 21, Brutal, HEAT, Slow Firing.  These stats mean it is a decent option for bombardments and its direct fire (if you can get close enough) is good enough to do double duty shooting tanks if there are no other options.  Despite this, at first glance, you may want to consider other heavier hitting options like the Acacia or TOS-1, but this might be a mistake.  The carnation is cost effective with 3 vehicles being 5 points, but most importantly it is a formation choice for all of the formations in the book, except the for (unsurprisingly) the Air Assault Company.  This makes it really easy to slot into your force.  If you are afraid you have too low of a break point for your formation(s) in your army, the Carnation can boost your chances of staying on the field, while providing a decent, flexible weapon. 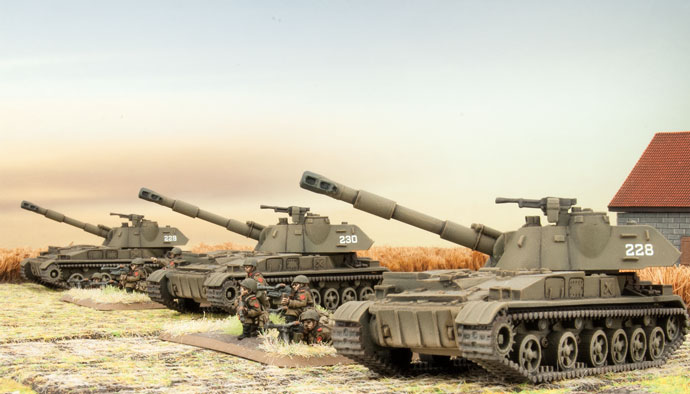 This is the heavy gun option for the Soviets.  The Acacia is similar to the smaller Carnation but you add a Firepower of 2+.  Direct fire against tanks with the Acacia is not much of an option with an AT of only 14, but its Firepower is Auto!  If you need to direct fire on dug in infantry or those sheltering in buildings though, this gun is very potent.  The really interesting option with this gun is the Kransopol projectile.  This is a laser guided howitzer shell with a minimum range of 16 and a maximum of 88 inches.  It does not suffer penalties for being used at long range and is guided by an observer.  Also, it hits tank top armour at AT 4. But what is truly scary is if the Kransopol is used against lighter targets.  This is because it has the Brutal rule so infantry hit by it re-roll successful saves (then the Firepower test succeeds automatically).  Additionally, the Kransopol projectile is not an artillery template, but an individual shot for each gun, so you can potentially get several shots on the target in the shooting step.  When you absolutely need to destroy your target, a battery of Acacias with the Krasnopol upgrade is the choice for you.  You get flexibility with regular artillery and direct fire and the terrifying surgical precision from the special ammunition all from 1 weapon!

This is a tried and true option for Soviet artillery.  The BM-21 Hail is a comparatively light weapon at AT 3, Firepower 4+, but it uses the salvo template to cover a wide area.  It is also very cheap in terms of points, running at 4 points for 3 launchers.  Being a salvo rocket launcher, it does not have a direct fire option but can launch Smoke.  The BM-21 Hail is your choice if you are looking for a simple and cheap option to take on infantry or provide counter battery fire against other artillery.  It is not devastatingly powerful but will allow you to slide a salvo template into your army list without devouring too many points which you can save for tanks or aircraft!

This is the BM-21 but on steroids!  The launcher is similar but gets a boost in range and has a better Firepower and Antitank rating.  The big difference here is these launchers also have the Minelets rule so they provide some are denial effects.  Overall the Hurricane is still more of an anti-troop option than anything else, but considering that it does have an AT of 4 and a 3+ Firepower, it can still destroy the odd tank with top armour hits making this option more flexible than the BM-21 Hail.

When I saw this unit, I did a double take…basically it is a flame thrower that uses a salvo template!  Mercifully the AT value is only 2, so as an antitank weapon it does not have much going for it.  But that is where this weapon’s limitations stop.  With the large template, a Firepower of Auto and the Brutal rating this means that when you hit the opponent’s infantry they must re-roll successful saves.  Foxholes or buildings which provide bulletproof cover are of no value because of the Auto Firepower.  3 launchers are 10 points so these are expensive to take (justifiably so), but this weapon will simply erase opposing infantry off the board.  If your opponent uses a lot of troops on foot this is the option you have been waiting for…and what they have always dreaded.

Do you have an extra BMP-1?  If not go get one.  Though the BMP-1 Observer is not technically artillery, this unit goes hand in hand with the Soviet artillery assets.  The reason you need it is because the Soviet forces get a dismal skill of 5+.  On the WWIII: Team Yankee battlefield this is not that big a deal when missiles and 100+ mm guns are doing most of the work, but trying to roll a 5+ (or 6 if the template overlaps terrain) will burn up your Range In Rolls fast.  Since the BMP-1 Observer has the Observer special rule it can lower your range in attempts to 4+.  This is still not the best in the game, but for 1 point it is essential if you are spending any of your precious points on artillery.

Let the Fire Rain Down

If you were considering ignoring the artillery options when making army lists from WWIII: Soviet, I hope this article has helped change your mind.  The amazing array of tanks, IFVS and aircraft this book introduces to the game could understandably distract you from humble long-range fire support.  But as we have seen, the options for the big guns and rocket launchers have what it takes to not only obliterate your opponent’s forces but also dictate the course of the battle through laying Smoke and Minelets. If your opponent thinks their infantry is safe in a building, introduce them to the TOS-1 and burn them out!  If he or she hides their tanks out of sight, send in a laser guided Kransopol shell after them!  With some careful and imaginative use of the awesome new Soviet artillery there will be nowhere to hide as you project the wrath of the Red Banner across the battlefield.