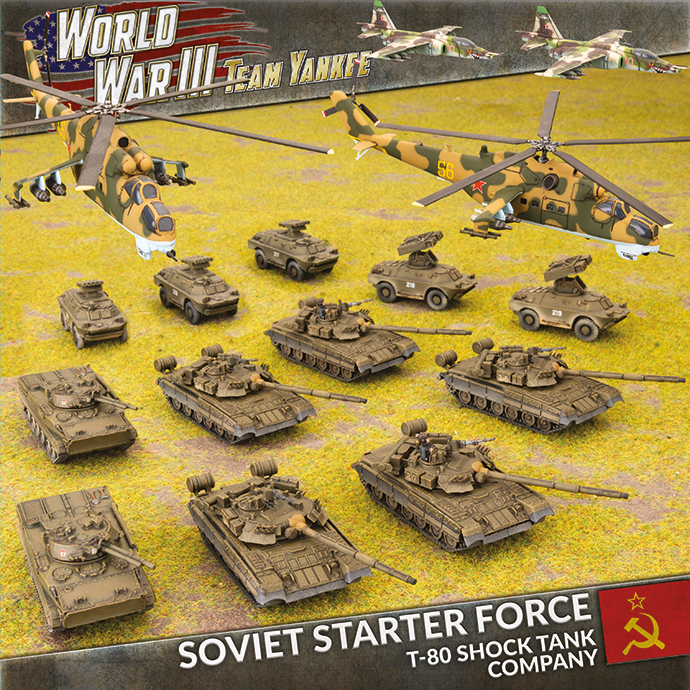 With the launch of the WW3 Soviet, I thought I would take a look at how could a new player or someone on a budget, could get a force on the table that would be competitive or at least hold its own with such iconic equipment as the T-80, BMP-3, Hind helicopter and Frogfoots.  For the new player, it opens the door to playing WW3 without needing to buy, assemble or paint too much and get into playing the game quicker.

So, if we look at what we get in the excellent value starter set, that might help decide what formation to run.  The starter set contains the following: 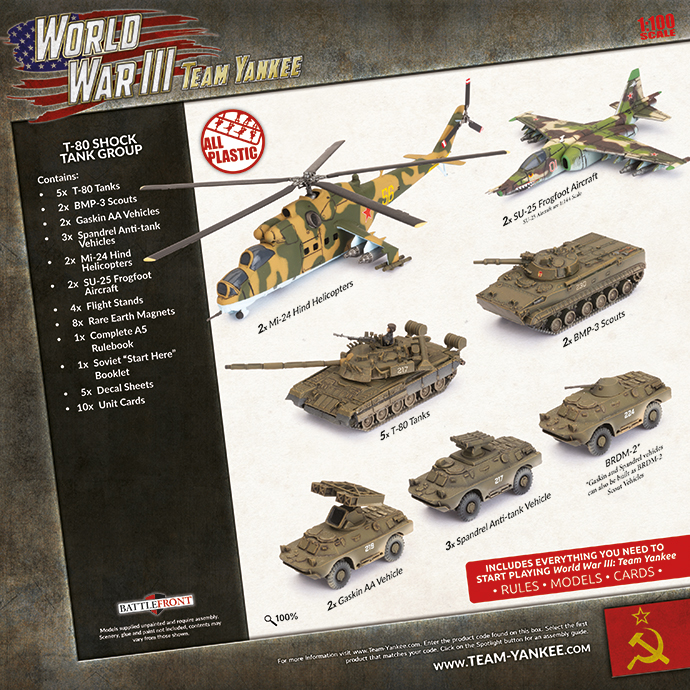 The bonus here is that the rulebook is included in the box – so the new player makes a saving right away.  Now if we look at what formations are in the WW3: Soviet book, we can see what we can maximize from what we get in the starter box. The best formations to maximize this straight out of the box is the T-80 Shock Tank Company and T-80 Tank Battalion.  Let us look at what units comprise the T-80 Shock Tank Company formation first:

Now the best thing with this list is that everything that has “Shock” in the title are hit on 4+ – that’s right 4+!  Looking at what is in the formation and what you get in the starter box, I would recommend you get two of the starters set plus a few other boxes to flesh this out.  Let us look at how to build this list at 120pts and then 100pts.

This formation is relatively strong with six units in the formation.  You have cautious T-80s with FA20, AT22 and ERA making them almost impervious to infantry.  The Shock Recon BMP-3s are useful all-round vehicles that can take on tanks, infantry, and helicopters plus provide spearhead for those missions that allow it.  Hinds provide flexibility with their AT23 missiles and guns.  This formation maximises your starter box investment using everything in the two boxes except for 1 BMP-3, 2 BRDM family, 4 Frogfoot sprues.  As an alternative, you could swap out the support option SA-9 Gaskins for Spandrels instead for the same points.

To buy this army you need only to purchase the following for $220:

Looking at what we can do with 100pts now, we remove the third Shock Tank Platoon for 29 points and look at a few options to fill in the remaining 9 points.  Option 1 could be: There are five units for the formation, add a pair of Frogfoots and upgrade the Hinds to have AT24 – so still achieving the goal of utilising most of the two starter boxes.  Again, you can swap out the support SA-9 Gaskins with Spandrels for the same cost.

Option 2 for a full complement of aircraft could look like this:

Only four units in the formation now but we have two units of aircraft and using all 10 of our BRDM family sprues!

The above lists you can play around with and add in other units such as infantry and artillery.  For me, the value of the Shock Infantry is huge for the soviet player, so I explore that further in another article around the T-80 Shock Tank Company. 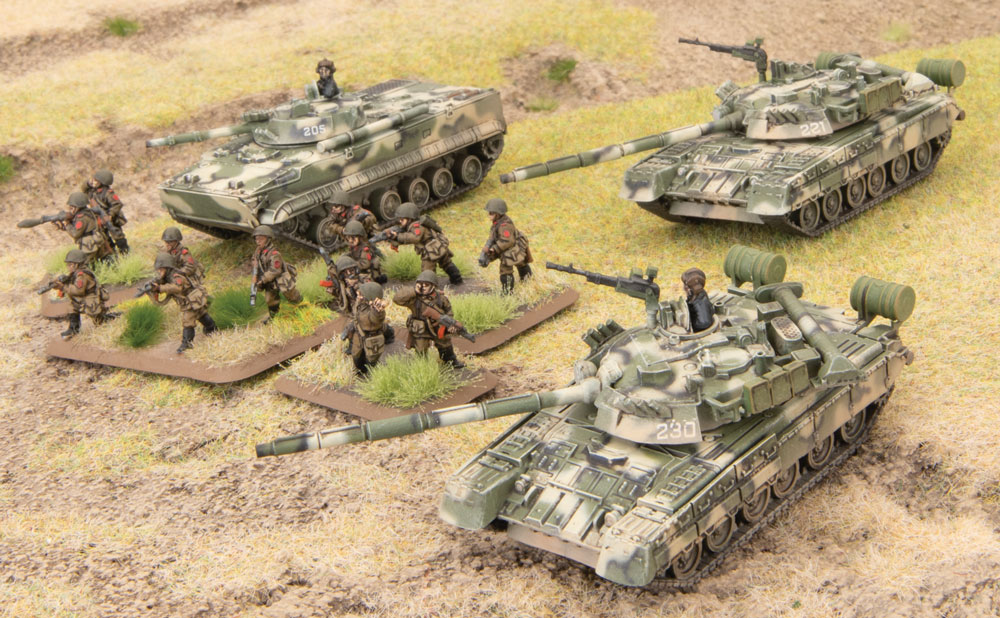 Now if we look at the T-80 Tank Battalion formation next, here is what it is made up of:

So still using the idea of using two starter boxes to maximize the value we get, let us look at the 120pt list first and 100pt list second: 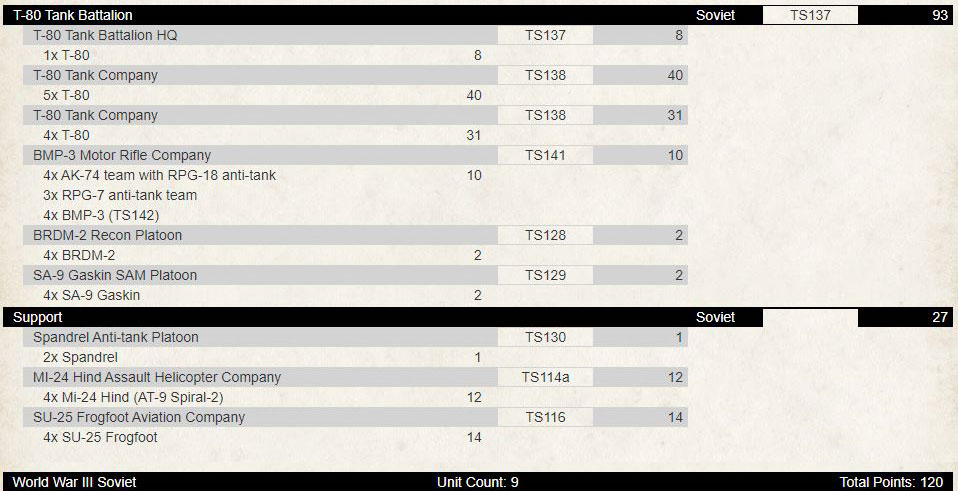 As you can see, we have used all our sprues in our two starter boxes to build this list!  I have included a small motor rifle platoon for this one to anchor the formation.  We have six units for the formation and lots of firepower.  Adding the small motor company brings your total outlay to $229!

For 100pts, there are a couple of options on how we can optimize the two starter boxes: Dropping the Frogfoots, downgrading the Hinds, removing one T-80, keeping the infantry allows us   to add an artillery component to our list for an additional small outlay brings our spend to $270.50.

Adding the artillery allows us to have a template to drop on infantry teams and light vehicles plus has AT21 allowing them to act as a stop gap anti-tank unit if we get desperate.  Adding in this unit brings the number of units in the formation to six.

This starter set is great value and a couple of these plus maybe a couple of additional boxes will get you well on your way to playing Soviets!

For those existing players who already have Soviet armies, this is still a great addition to upgrade your armies.  If you just need T-80s and BMP-3s and maybe an additional BRDM family unit then I recommend getting one of these starter boxes plus an additional T-80 or BMP-3 box.