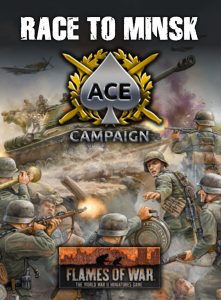 What Is Race to Minsk?
Race to Minsk is the second in a series of Ace Campaigns, a narrative-driven system of Flames Of War battles. Ace Campaigns are extremely flexible in allowing players to tailor their campaign to fit their playgroups needs. There are three different modes that you can play the campaign in: Story Mode, Extended Mode, and Aces Mode. Story mode is your shortest campaign that only uses the Story and Reward cards, while Extended allows you to play longer campaigns by adding in side missions. The Aces mode can be used with Story Mode or Extended Mode and allows players to create their own unique commander with special abilities that will give them an edge during the course of the campaign.

Click here to view the Race to Minsk: Ace Campaign in the online store here… 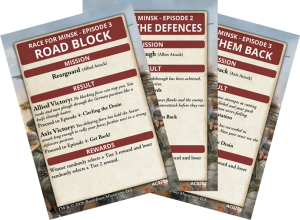 Story Mission Cards
The first thing to do is to play the current mission. In the first turn, Episode 1: Storming Forward. Read the narrative text to give you and your opponent context for your battle. Then follow the instructions on the mission card to set up your game. Once everything is ready, play your game!

Once the mission has been resolved, locate the next mission indicated on the Story Mission you just completed. That will be your next Story Mission. Then discard all other Story Mission Cards with that same Episode number as the new mission. 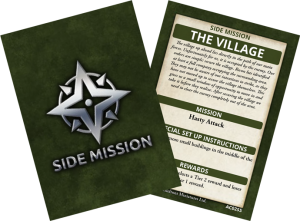 Side Mission Cards
Side Missions are used in the Extended Play mode, for those who want a longer campaign. In the extended mode, more missions and rewards are added to the mix. Side missions are played between the story missions and all missions grant players rewards that they can use in future games. This mode is ideal if you want to spend a little more time playing games and earning rewards.

Side Missions are bonus games that you can play after the main Story Missions. They give you an opportunity to try out new Ace abilities (while playing Aces Mode) and earn valuable rewards. Once a side mission has been played, set it aside and do not shuffle it back into the deck, this means that you never play the same Side Mission twice in a campaign. 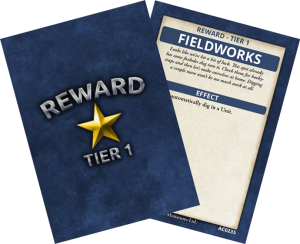 Reward Cards
Completing missions will earn you rewards that you can use in subsequent missions. Rewards are sorted into tiers, one for each phase of the game following a Story Mission. The higher the tier level, the more powerful the effect the reward will have.

Once used, reward cards are shuffled back into their respective tier decks. 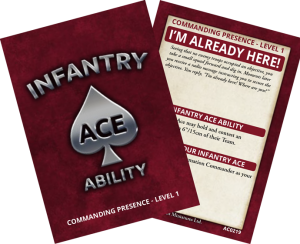 Ace Choosing an Ace
Before playing their first game, players choose an Ace set to use throughout the campaign. This set includes two Infantry Ace sets and two Tank Ace sets. These Aces will have abilities better suited to their type, so for example, a tank ace is better off leading a tank force.When a player chooses an Ace, one of that player’s formation commanders becomes the Ace for the campaign. Any abilities and special effects granted by the Ace are limited to Units in that Ace’s Formation.

Ace Abilities
Completing missions will earn you rewards that you can use in subsequent missions. Rewards are sorted into tiers, one for each phase of the game following a Story Mission. The higher the tier level, the more powerful the effect the reward will have.

Once used, reward cards are shuffled back into their respective tier decks.

Flexible Campaign System
The Ace Campaign system is meant to be flexible, and fit your group’s needs making even easier for you and your friends to set up and play in a campaign, or to set up a story driven Tournament, the set can do that too.

The system can grow as well, as more and more sets come out you will gain more and more cards to add to your Ace Campaign sets, giving you even more Aces to choose form, new story missions, more side missions and even more Reward cards.