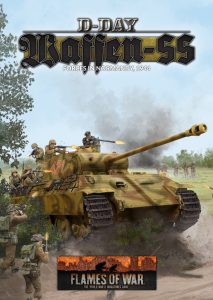 Between mid 1943 and mid 1944, the German focus was on the Eastern Front. After the failure of the German Kursk Offensive, the Red Army went on the offensive, throwing hammer blow after hammer blow to drive the Germans back to the Russian border. The elite 1st and 2nd SS Panzer Divisions were rushed to wherever the Soviets broke through, counterattacking to seal the breach. By Christmas, the divisions were worn out, barely a regimental sized battlegroup remained. They desperately needed to be withdrawn to France to rebuild back to full strength.

Check out D-Day Waffen-SS in the online store here…

Then, as 1944 began, the Red Army attacked again. The two new divisions being formed in France, the 9th and 10th SS Panzer Divisions were rushed to the Eastern Front and the plans to rebuild the existing divisions were shelved. Finally, in March, the Spring rains turned the roads to mud and the Soviet offensives ground to a halt. All four divisions were returned to France for rebuilding, joining the 12th SS Panzer Division which was part way through its training. Six weeks into their training, still trying to bring large numbers of conscripted replacements up to scratch, the Allies invaded France on D-Day. Ready or not, the SS panzer divisions were rushed to the invasion front, counterattacking to drive the Allies back into the sea.

With a solid core of veteran leaders under your command, can your willing, but inexperienced troops defeat the Allies despite their massive superiority in numbers? Can you win a never-ending battle of attrition, or do you attack into the teeth of massed artillery, naval bombardments and airpower? Can you defeat the invasion and save your homeland?

Here are the forces you have available to you: 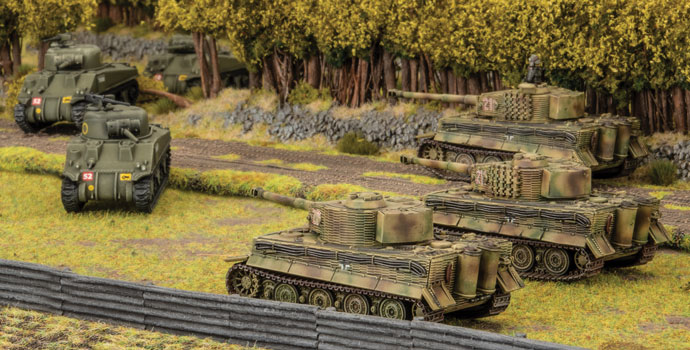 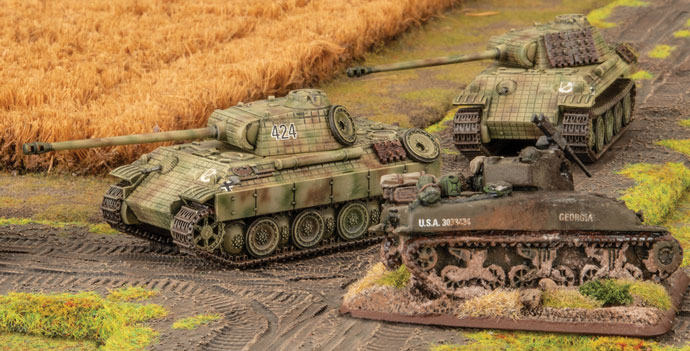 How Do The Waffen-SS Play?

You can build your Waffen-SS force in a variety of different ways. You can build a force of elite heavy Tiger tanks. With their heavy armour protecting them, these veterans have suffered few casualties while they learned their trade. Now they are deadly. Whether you take them as the core of your force, or as a backup to lighter troops, they are always effective.

You can build a panzer force, either mixing types to take advantage of their different capabilities, or focusing on one type to maximise its strengths. Panthers are cheaper than Tigers, but offer much of the same benefits, so long as you can protect your flanks. The Panzer IV and SuG are cheaper, but still good enough to outclass Allied medium tanks. With their fanatical crews, the Allies will have to knock out every tank.

Like the rest of the Waffen-SS options (other than the elite Tiger tanks) your panzers are less skilled than their Army counterparts, their commanders are Old Hands, so units close to the company commander can use his skill when making tactics rolls to do clever things like Blitz Move or Shoot and Scoot. This can mitigate their inexperience and counteract their tendency to get hit more often than their Army equivalents. Their lack of skill makes the Waffen-SS cheaper than Army troops, Make use of the greater numbers you get to overwhelm the enemy, and if necessary their determination to keep fighting to outlast the enemy and achieve victory.

Your other option is to go for a panzergrenadier force. Infantry as fanatical as these can be hard to beat. When attacking, they rarely remain pinned down, especially when their company commander is nearby giving them re-rolls, and in an assault they will fight until they’ve taken the objective or died trying. In defence, they are equally tenacious. The enemy will have to kill them all to clear the objective, something that can be dreadfully expensive given the amount of firepower they possess.

The key to any Waffen-SS force is to keep the pressure on the enemy using your excellent and plentiful equipment and rely on your superb morale to outlast them. In common with the other D-Day books, D-Day: Waffen-SS has three new missions linked together with two of the standard missions into a campaign. The fighting is very fluid, from the counterattack on the Allied beachhead to a final dash to escape the Falaise Pocket. The first mission is Encirclement in which the Germans attack from the flanks trying to crush a salient formed by the Allied spearhead before more reinforcements can arrive from the beaches. The old standard No Retreat follows as the Germans attempt to keep the Allies penned in their beachhead.

The second new mission is Gauntlet, in which the Germans, cut off by the advance towards Caen, must dash down a narrow gap between two British forces to escape entrapment. With more units arriving from both sides as the game progresses, it’s an interesting challenge to hold the route open to extract your forces. Another standard mission, Bridgehead, follows as the Germans attempt to hold the Orne bridges open for the retreating forces to cross.

Finally, the third new mission is Into the Unknown, reflecting the loose fighting as the Waffen-SS attempted to delay the Allied forces pushing in the base of the Falaise Pocket in confused and open fighting. Like Dust Up, the fighting is across the diagonal of the table, but unlike that mission, neither side holds any objectives at the start of the battle. The combatants need to advance into No-Man’s Land to cover their own objectives and seize those of the enemy. 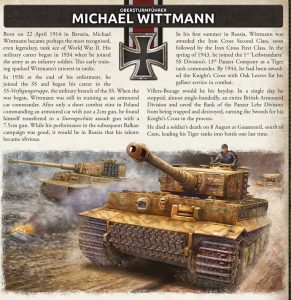 Who Are The Warriors

Three of these soldiers were tankers in Normandy. Michael Wittmann, famed as Germany’s top-scoring tank ace, commanded the Tiger tank company that dramatically halted the British advance at Villers Bocage soon after D-Day. His elite crew make his tank truely deadly with its high rate of fire and re-rolls if it misses. In addition, his command tanks can be placed in ambush in addition to any normal ambushes!

Karl-Heinz Prinz led a Panzer IV company, making rapid and bold counterattacks to regain lost positions and stop British attacks. His card allows you to re-roll failed reserves rolls to bring his units onto the table. Ernst Barkmann was a Panther tank commander who had some interesting adventures when cut off by the American advance, claiming a number of M4 Sherman tanks before limping back to the German lines with a badly damaged tank. He’s a good shot and has a chance of surviving a hit that would destroy the tank of a lesser tank commander, giving him a chance to return to battle and fight on.

Rudolf Roy also commanded an armoured vehicle, a Jagdpanzer IV tank-hunter, with which he claimed 26 British, Canadian, and Polish tanks in five days, helping keep the Falaise Pocket open long enough for much of the German panzer force to escape to fight another day. His gunner’s shooting is deadly accurate and his careful use of cover makes him hard to hit as he stalks the enemy. Emil Dürr was also a tank-hunter, part of a unit of 7.5cm towed anti-tank guns. When his guns were knocked out, he gathered up Panzerfaust anti-tank launchers and hunted tanks on his own.

The final warrior is Adolf Peichl, a veteran of fifty close combats including the destruction of at least eleven tanks. When he’s fighting in an assault, he and any unit he’s leading will pretty much fight to the death, with him as a lethal whirlwind in the centre of the fight.

The D-Day: Waffen-SS book will give you some great new ways to use your existing D-Day: German army, as well as opening up new options for painting and army building.