A number of years ago my family went to the Canadian War Museum in Ottawa where among the exhibits, I first saw a Panther tank in person. I was instantly wowed by this awesome machine. At 3 meters high with a high velocity 75mm cannon and lines that made it somehow superimposed between the armoured behemoths of World War II and modern battlefield predators, the Panther tank instantly became my favorite vehicle. Tracks, wheels, or wings, nothing beats the Panther for me! Panthers in Flames Of War

Move ahead a few years to when I began to play Flames Of War . I was happy to use Panthers. I found they were great in defense where they could outrage the Allies with their whopping 40-inch range at AT 14. Using Stormtroopers to Blitz and then Shoot and Scoot, my Heer Panthers (from D-Day: Germans) worked in the role of long-range tank snipers. However, game after game here they stayed and it became a little predictable. For 1 point more, my Tigers got the other missions. With the same Front Armour, Side Armour 8, Top Armour 2 and a Last Stand and Remount of 2+ they were that much more flexible.  Despite this, I always wanted my Panthers to have the opportunity to fill other roles too, as was only fitting of this World War II titan. Fortunately, with the impending release of the D-Day: Waffen-SS book, that time has come….

So, what is different that breathes new life into the SS Panthers? It’s the stats. The SS used the same equipment as their army counterparts, but were trained differently with an aggressive, sometimes even fanatical approach. They tended to have higher losses and therefore did not accumulate the experience which is reflected in the stats for the SS Panther platoons. Because of this, on the down side, they are Hit On 3+, and count as Trained for skill. However, they trade this for a Fearless Motivation and most importantly a hefty decrease in points by almost 25% from their army counterparts. 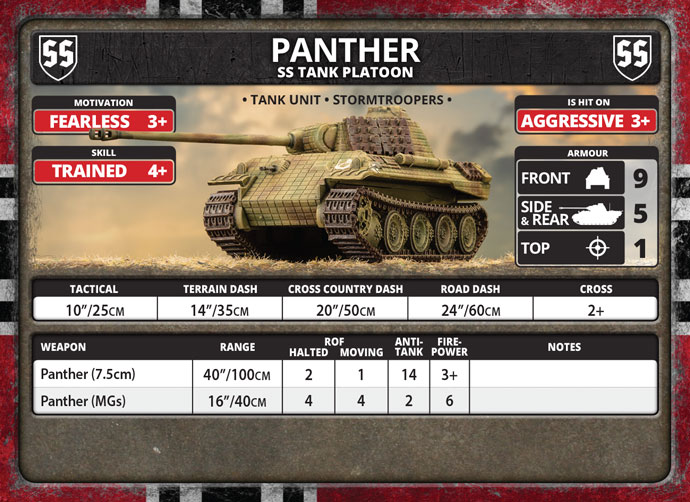 These changes amount to the a very different playstyle. Let’s take a detailed look at just some of the possible differences:

For regular army units, the Panther is just too expensive to have full Formations on the table at the 100-point limit. As a result, you often do not see them in games and certainly not in any great numbers. If they are there you can be certain that they will always be sitting back at a distance looking for long range pot shots. Now with the SS Panthers, 98 points will get you 11 Panthers on the table! (To field the same number of army Panthers from D-Day: Germans would cost a whopping 121 points.) With the SS you can reasonably have a horde of Front Armour 9, AT 14 panzers all bearing down on your opponent! Trading the Hit On 4+ for 3+ should not be too much of a disadvantage, because even though the hits are going to be made, the penetration rolls remain the same and you have a 3+ remount due to your Fearless Motivation. Moreover, though the Allies in Late War have plenty of 17 pounders, 3-inch guns and 76mm Shermans, all hitting with high AT ratings, chances are they will not have the numbers or range to go toe to toe with so many Panthers all at once.

Let’s face it even though the Panther is still better fighting at range you will occasionally need to engage in (or receive) assaults. Side Armour 5 can possibly repel a few bazookas or PIATS, but with a Motivation of 4+, army Panthers tend to run away when it is time to roll for Counter Attack. If your Panthers are defending an objective this is an even bigger issue as they will likely be pushed off it. The SS however changes this. Though they have a skill of 4+ making them less likely to cause casualties in an assault, they also are much less likely to be running from the fight with their Fearless Motivation. So, go ahead and sit your SS Panthers on an objective.  If they have to fight up close and personal, they are not the ones that will be running away.

As mentioned above the Panther is best in defense. The SS version is not much different. Front Armour 10 at long range will go a long way to offset the Hit On of 3+ and the gun is still the AT 14, 3+ Fire Power marvel that the German long barrel 75mm always has been. But I hear you say the SS Panther loses out because with Skill 4+ your Blitz followed by Shoot and Scoot Stormtrooper special orders are less likely to succeed. Don’t worry though the Old Hand rule takes care of this.

With your Panthers skulking within 6 inches of their Formation HQ they now stand the same chances of Blitzing out of cover, taking their shots like they were stationary, and then Shoot and Scooting back to safety as their army counterparts.

Get Out and Play

Now that we have shed the light on the differences that are coming with the SS Panther it is time to get ready to put yours on the table. The new stats in the D-Day: Waffen SS book will not only give you a new host of fun options for how you can use these mighty hunters, but also usher in an age where the Panther can become a top carnivore on the Flames Of War battlefield. Now is the time to let your Panthers go on the Prowl!