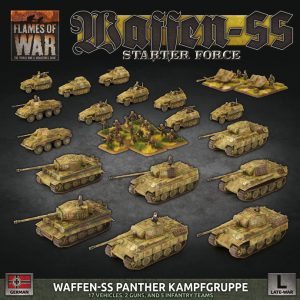 With the launch of the D-Day: Waffen-SS release, I thought I would take a look at how could a new player or someone on a budget, get a force on the table that would be semi-competitive or at least hold its own with such iconic equipment as the Tiger and Panther tanks, and the Puma armored car.  For the new player, it opens the door to playing Flames Of War without needing to buy, assemble or paint too much and get into playing the game quicker.

So, if we look at what we get in the excellent value starter set (Waffen-SS Panther Kampfgruppe), that will help decide what formation to run.  The starter set contains the following: 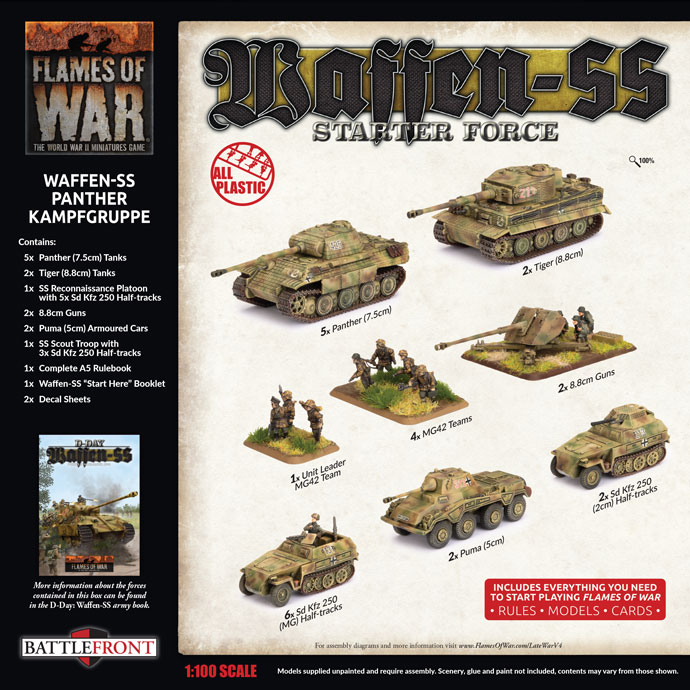 The bonus here is that the rulebook is included in the box – so the new player makes a saving right away.  Now if we look at what Formations are in the D-Day: Waffen-SS book, we can see what we can maximize from what we get in the starter box.  The best Formation to maximize this is the Panther SS Tank Company.  Let us look at what units comprise this Formation:

Looking at the Formation and what we get in the starter box, we can use all seven tanks in the Formation.  To maximize our investment, we can add a small SS Reconnaissance Platoon in Formation support. We can also add the following support options; 8.8cm Tank Hunter Platoon, Puma SS Scout Car Troop, and Sd Kfz 250 OP.  This leaves just two Sd Kfz 250 Half Tracks not used.  For a 100pt list, to round out the force we need to add a Wespe SS Artillery Battery in support.  So how does this look from list building perspective

So, what does this list have – 7 x AT14 Gun platforms.  Can take on any tanks at range and all our tanks have FA9.  Yes, the Panthers are hit on 3+ being Aggressive but also being Fearless, which means Remounting and Last Stand checks are on 3+ as well.  The Tigers are absolute beasts and with 2+ Morale and Careful, its relatively survivable to take a two-tank platoon.

Infantry to hold objectives or attack out of a Spearhead created with the Pumas.  8.8cm guns with AT17 and 48” range will take care of even heavy tanks at long distance – one hit – dead.  Perfect for an ambush or for sniping and keeping your opponent honest!

Armored artillery to pin down and remove dug in infantry and guns off the objectives whilst not being pinned themselves.

Pumas to Spearhead and cause a nuisance in the backfield with their AT9 gun – a threat to side armor of medium tanks!

For reserves, put the big Panther platoon in reserve with the Pumas.

To buy this army you need to only purchase the following for under $160:

We can also make some additions to the above list to change it a bit depending on your play style. I am a big fan on having some units pulling double duty and/or by making a tweak with a Command Card or two – so let’s have a look at an alternative list with a couple of minor tweaks but gives the army a different profile. 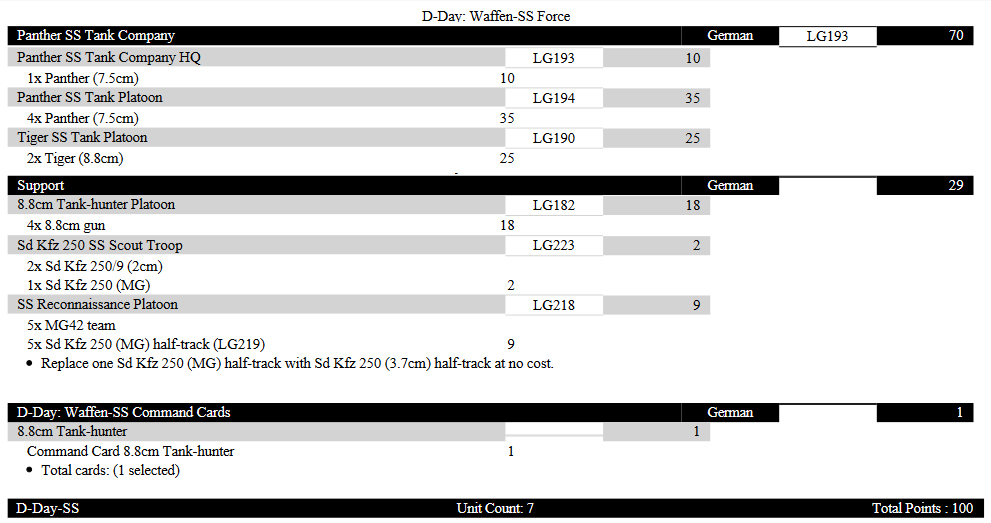 So, as you can see – the Formation and Formation Support itself does not change – just the support options.

The big difference is taking a full strength 8.8cm Tank Hunter Platoon instead of a short platoon.  A full-strength unit should hang around long.  With the upgrade to artillery command card, these guns now become an artillery unit as well as AT gun platforms with an indirect bombardment range of 88”!  This unit can pull double duty, is careful and will cause your opponent all sorts of headaches!

To buy this army you need to only purchase the following for just over $165:

Now you might be wondering what to do with the two extra 8.8cm guns.  In the D-Day: German book, you can take two platoons of 8.8cm Tank Hunters of 2-4 guns each.  My favorite is to take two platoons of 3-4 guns in a D-Day: German Beach Defender list (that is a separate article to explore further soon).  So, as you expand your army, you will have more flexibility to play different armies from both books.

There you have it.  A couple of easy and versatile options to get into Flames Of War that is great on the budget and gives you the most bang for your buck starting a new force and the foundations to expand upon your German force.