The M1 Abrams has become ubiquitous with the modern US military. Its mighty carapace has been a difference maker across a multitude of battlefields is the past several decades. Its legacy is that of an apex predator. Where the rumble of its treads is felt, victory is assured. This legacy has held true in the realm of World War III Team Yankee.

With its M68 105 mm gun as its sword and its top secret Chobham armor as its shield, the M1 Abrams can run roughshod over any armored competitor. In the game this has manifested itself as an Anti-tank stat of 20 on the gun with a 2+ firepower as well as its Front Armor 18 and a Side Armor of 8. This may seem like an unstoppable behemoth, but what if you want more?

Enter the M1A1. The new Abrams boxed set will be able to make this even more dominant variant of this already monstrous tank. This variant has gone and stolen the Leopard 2’s lunch as well as its deadly M256 120 mm gun. It’s now striking at an unbelievable Anti-tank of 23 while preserving its 2+ Firepower and standard 2 Rate of Fire along with its Advanced Stabilizers and Laser Rangefinders. In addition, it’s added depleted uranium to its Chobham armor taking the standard M1A1 to an ironclad Front Armor of 19 and Side Armor of 10 (unless you want to pay the points to upgrade it to the M1A1HC variant with a Front of 21 and Side of 11!).

The M1A1 is costly, but it is the foundation on which your list can be built. Its combination of offensive firepower, defensive armor, and speed make it well worth the points and sets the tone of your game. Your opponent will need to solve the puzzle you placed before them, meanwhile your Abrams will do what they do best: seek and destroy. You need only bring along a mix of support units to defend your Abrams and some infantry to lock down objectives. 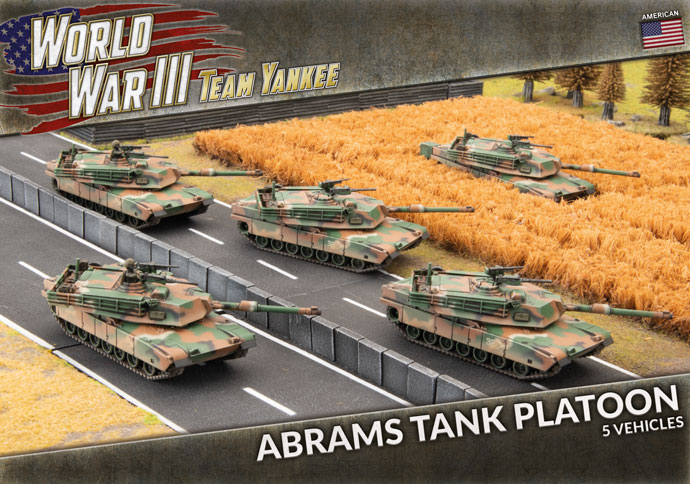 The M1A1 is truly monstrous. The updated boxed set allows for the fielding of this beast to run rampant across the battlefields of World War III.  It will leave your opponents trembling like the ground beneath your treads; and it will flatten them equally effectively.