Those who have followed previous Live Launches, will have probably seen my articles on list building, and army choices before. When the D-Day: American book came around, it was a super easy choice on what formation for my US army I would take – Paratroopers. Specifically, I built a full
formation choice in the book and platoons of Easy Company, 506th PIR, 101st Airborne as they were on the ORBAT going into Normandy on 6 th June 1944 – complete with Lt. Winters, Spiers, Nixon and the Toccoa Sergeants from real life and also immortalised in the HBO Series Band Of Brothers. 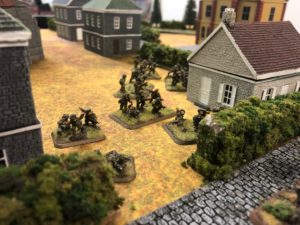 This force was reliably backed up by my absolute favourite tank of the war – the M4 Sherman, in all its glorious forms. For the project I took loads of 75mm variants, a smattering of 76mm Shermans and also a platoon of 105mm too. In total I managed to paint almost 400points of US models for my army. Then, during the Hobby League Campaign, I managed a rather respectable 7 wins to just 2 losses and a draw. Not bad considering I’m known in the office for my poor dice rolling! Also during the Hobby League, I put together a D-Day: German Panzergrenadier Force, with Panzer IV and
Panthers which I really enjoyed using, but there is something about the Airborne formations that always draw me back. So at the same time I managed to put together an 80pt Fallschrimjager Force to swap out with the Panzergrenadiers as I desired.

It was as soon as the D-Day: British book landed on my desk, that I knew in my heart of hearts which formation I was destined to put together. A D-Minus 1 British Parachute Company – with as much AT as I could muster onto the planes and within the list. 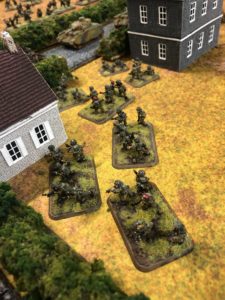 For a start, the new plastic sculpts for the British Paratroopers are probably my favourite plastics we have produced to date for infantry. I love the attention to detail on the helmets, smocks (including buttoned up ‘pull through’ at the back) the folds on the Denison smocks, as well as the variety of weapons each bloke is armed with – you have the ubiquitous SMLE rifle, Sten gun, Bren Gunner, as well as a plethora of officers and NCOS with Webley revolvers, moustaches and most importantly, berets.

I literally jumped at the chance to grab some of the plastics from our resident man of mystery sculptor Tim Adcock, and feverishly put them together. Soon I had enough troops for three full platoons, complete with PIATs and 2inch mortars, and I even managed to scrounge together some
6pdr AT guns as well as crew from my bits box that are perfect for making a mini diorama for the force. 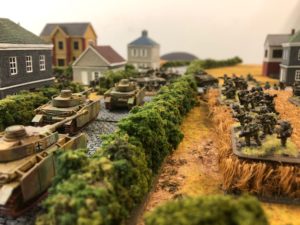 Combined with the options for taking a Desert Rats Cromwell Armoured Squadron in support complete with embedded Firefly and I’ve got myself a well rounded army that is vicious in assaults, able to hold its own against most tank armies I will encounter with the AT of the 6pdr and the PIAT,
as well as flexible enough to be able to fulfill a variety of roles that I might face in a game. Further, I can see the army being repurposed for further Late War projects that I have my eye on in creating scenarios for, that involve bridges, Armoured rushes up long highways, and rear-guard actions involving umbrellas and hunting horns. 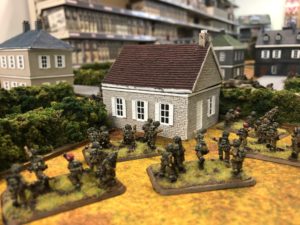 But most importantly, is the command cards for the British. I got a sneak peak at them, and suffice to say that I will be taking Mr Joe Ekins and a Lt. Col of the 6 th Airborne to tease victory for my games of Flames Of War.