Since I’ve been spending my recent months learning Czech and enjoying Czech cinema, I was inspired to tackle the CIAB as a D-Day: British project. I am still cooking it up, so I will be sharing the project in short while on the home page, but for the time being I highly recommend everyone check out this Flames Of War article from which I got most of my info.

The opening of the Second Front in Europe on 6 June 1944 gave the exiled Czech troops who had been training in the UK the chance to take the fight to the Germans and, they hoped, the chance to take part in the liberation of their homeland.

Some Czech troops who had made their way to the UK had combat experience in the desert, others formed support units. This nucleus of troops formed an Infantry Brigade in mid April 1943, later converted to an Armoured Brigade in September 1943.

The men of the 1st Czechoslovak Independent Armoured Brigade Group (CIABG) were anxious to get to grips with the enemy who had forced them from their homes, but had to wait until 30 August 1944 before the Brigade was deployed to France, initially assembling at Falaise. The Brigade
The Brigade, under General Alois Liska, was trained, organised and equipped along British lines. The troops who assembled at Falaise comprised a powerful mechanised all-arms force.

The Brigade HQ comprised Cromwell IV tanks and Sherman OP tanks for forward observers. The main “teeth” of the Brigade were found in the two (later three) armoured Regiments. The 1st Armoured Regiment under Maj. S. Rezabek and the 2nd under Lieut. Col F. Seda were similar, each comprising an RHQ of Cromwell VII tanks and a troop of Sherman Firefly VC tanks armed with the formidable 17pdr gun. Forward observers were carried in Cromwell IV OP tanks.

The Regiments each had an Armoured Recce Troop with Stuart VI Light tanks, and three squadrons, (‘A’,’B’ and ’C’) with Cromwell IV and VII tanks, plus Cromwell VIII 95mm Close support tanks in the SHQ. There were no Firefly or Challenger tanks in the squadrons themselves. This unit was later expanded into the Brigade’s 3rd Armoured Regiment when the Brigade adopted a relatively static existence in the winter of 1944/45. This Armoured Regiment differed from the first two in the Brigade by being equipped with heavy Churchill III/IV and VI Infantry tanks. However, the Churchill’s did not see any offensive action during the siege.
The Brigade’s AT Battery, the “oddil K.P.U.V” under Maj. A. Sitek initially contained two troops of 17pdr anti-tank guns, initially towed by Chevrolet 30cwt trucks, later by Morris EA 4 x 4 vehicles. A third troop was added in the winter of 1944/45.

The Field Artillery Regiment under Col S.Rajmon initially comprised two batteries (“P” and “Q”) of towed 25 pound guns, with a further battery, (“R” Battery) added during the winter of 1944/45. These core units were supported by an AA Troop with towed 40mm Bofors guns and an overworked and slightly under strength Engineer Company which was again expanded during the 1944/45 winter.

To the disappointment of the men of the CIABG, they were not to press East. Instead, they were directed to the Coast, with the mission of containing the remaining German bastions of the once formidable Atlantic Wall. The Allied advance stranded substantial German forces in ports along the coast and the defenders of these ports had been ordered by Hitler to hold them to the last.

To Dunkirk
Liska’s men, as part of First Canadian Army (and later part of 21st Army Group) were assigned the role of containing the German garrison trapped in the port of Dunkirk. Canadian troops of the 2nd Canadian Infantry Division had arrived at Dunkirk in September 1944, contained the defenders and handed over the task of besieging the valuable port to the CIABG on 6 October 1944. The task was to contain the powerful but essentially immobile garrison, rather than to storm the port. 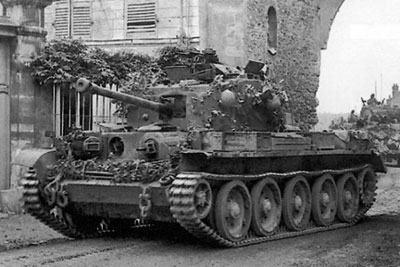 The siege role ill suited the Czechs, who had insufficient manpower for the task and lacked the specialist engineering vehicles necessary to reduce the inland defences.

The successful, but costly, captures of Le Havre, Dieppe, Boulogne and Calais had given the Allies caution. Dunkirk as a prize was not required at the cost of significant casualties. The mobile formation had to content itself with maintaining an impenetrable cordon around the city, prohibited by the French authorities from mounting any prolonged bombardment of the historic centre.

The Czechs were not alone in their task, being supported by Canadian and British heavy AA units, whose 3.7” AA guns were employed in the direct role, as were the additional 40mm Bofors guns of the 125th Light AA Regiment.

The 7th Royal Tank Regiment lent the support of its heavy Churchill tanks. A shortage of infantry was in part addressed by the formation of two battalions of Free French infantry formed from the local F.F.I (Forces Francaises d’Interieur) under Lieut. Col Lehagre, equipped and armed by the British. The Defenders
Dunkirk, as part of the “Atlantic Wall”, possessed formidable defences to protect itself from attack from sea. These included concrete bunkers, pill boxes, coastal defence and anti-aircraft emplacements.

The inland part of the perimeter was defended by areas of flooded low country, bunkers, fortified farm houses, improvised pillboxes and thousands of mines, including British mines captured after the evacuation in 1940.

The defenders were well stocked with artillery, having over 80 pieces with calibres ranging up to 200mm, plus nearly 100 anti-tank guns of various calibres. Defenders were also plentiful, if their quality was uneven. At the time of the eventual surrender of the port to the CIABG on 8 May 1945, there were over 11,000 troops. These men were drawn from Luftwaffe, Kriegsmarine, Festung and Wehrmacht units, including 226th infantry Division, 346th, 711th, 49th and 97th Divisions and the 26th and 1046th Fortress Battalions. Of the total, approximately 2,000 were part of the Waffen-SS Reinecke Group. In accordance with common German practice, the defenders formed ad hoc Kampfgruppe to defend specific sectors of the perimeter. Losses during the siege amounted to approximately 1,000 men. The Siege
As the CIABG lacked the means and the orders to take Dunkirk, the Czechs set about establishing a cordon to contain the garrison and prevent any breakout by valuable troops. The CIABG’s mission was to harass the defenders, engage in aggressive patrolling and cut off coastal supply routes. Despite the relatively static nature of the operation, the men of the CIABG were occasionally able to demonstrate their prowess and mobility in mobile battle. On 28 October 1944, elements of the 2nd Armoured Regiment and the Motor Battalion conducted a feint which drew defenders out from their prepared positions.
A lightning riposte against the exposed German infantry saw over 40 casualties inflicted on the defenders at a cost of only two casualties to the CIABG. This operation drew significant praise for the manner of its execution from higher levels, including Field Marshal Montgomery.

These opportunities were, however, rare and morale did suffer as it became apparent that the Brigade was not to be permitted to join the U.S. forces which were heading toward the Czechoslovakian homeland. Only a token force of 150 men was permitted to accompany the U.S. Troops headed toward their eventual meeting with advancing Soviet forces.

On the positive side, casualties incurred during the siege were relatively light, amounting to 167 dead, 461 wounded and 40 missing. One peculiarity was that the availability of Czechs who had been forced to fight in the German Army, but who had been captured or deserted to the Allies meant that the Brigade actually grew over time, enabling the strengthening and addition of units as outlined above.