Oil War themed Westland Lynx AH.1
For the Lynx I was far more heavily influenced by the Lynx helicopters used by UK forces during Operation Granby. 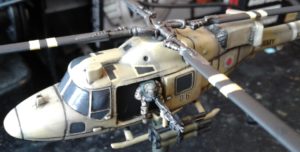 Because of that the colour scheme that I chose for the Lynx is the two tone yellow and tan camouflage pattern. I also wanted to add a few unique touches to this model, as you will see from the following step by step pictures and brief explanations. 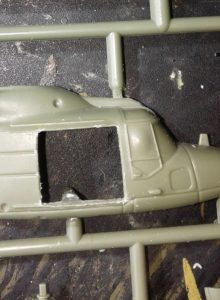 Step 1: The first unique touch that I conceived of was to have the sliding doors slid back. This required a bit of surgery using a very sharp scalpel and file.

Step 2: Once I had the doors suitably removed, I had to decide if I was going to build an interior or blank off the doorways. Whilst a detailed interior would look cool, and be an awesome modelling project, it would somewhat defeat the purpose, so I chose blank off the opened doorways. Therefore I used some 0.5mm plastic card and Muliput modelling putty. 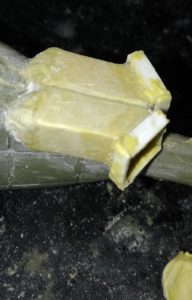 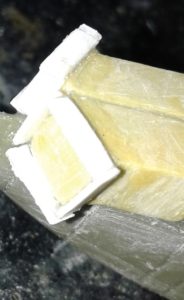 Step 3: After looking at a lot of pictures of Operation Granby era Lynx helicopters, one of the most striking additions were the squared off exhausts designed as a countermeasure to defeat heat seeking missiles. Initially I started to build these exhausts out of plastic card, however as I started to do this it was proving to be time consuming and complicated. However before giving up on the idea, I thought that I would try to make a simplified model using Miliput … with some plastic card embellishments.

Step 4: With the model now assembled and suitably modified, the next step is to start painting the model. I first sprayed a light grey surface primer.
Normally I would then start with a base colour, however in this case I decided to ‘pre-shade’ the model. To do this I sprayed Vallejo Model Air 71.251 (NATO Black) along panel lines and where details meet the main part of the model. The reason to do this is add a small amount of subtle depth to the follow on paint work. Step 5: After the pre-shade I moved on to starting the camouflage pattern. I started by spraying Vallejo Model Air 71.138 (US Sand), the darker of the two main colours in the pattern. In order to make the pre-shade work is to ensure that the paint going over it needs to be quite thin and built up in layers so that the differences in the tones of the primers shows through. How much you build up the main coat determines how heavily worn the final paint looks.

Once the tan colour was applied, I moved onto the yellow colour, in this case Vallejo model Air 71.143 (UK Light Stone). This colour was applied by building up thin layers until the desired effect was reached.

As you see the two colours are quite close to each other. This was an intentional choice as the Operation Granby aircraft were painted in the two colours that I used, therefore the camouflage scheme on the real aircraft is not particularly defined. 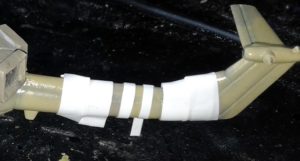 Step 6: After the two primary colours of the model were dry, I sprayed a coat of gloss varnish over the top. Normally this stage would be thoroughly unnecessary, however I wanted to paint white ‘invasion’ stripes toward the rear of the tail, and the best way to do this would be to mask the area off, and I didn’t want to risk damaging the paint beneath. 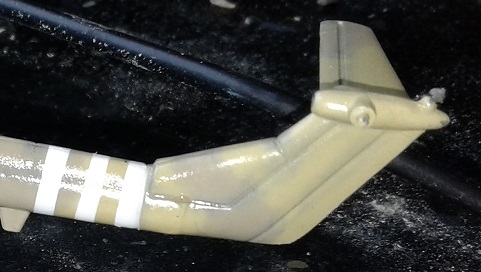 Once the area had been marked off with Tamiya masking tape, I sprayed Vallejo Model Air 71.279 (Insignia White).

Step 7: Next up I decided to paint up the glass areas of the model using Vallejo Model Color 70.816 (Luftwaffe Uniform)

Step 8: With the glass areas being more defined I decided to paint on the non-slip panels on the cabin roof of the aircraft. I painted to black portion using Vallejo Model Air 71.251 (NATO Black), and then I outlined these shapes using Vallejo Model Colour 70.916 (Sand Yellow). 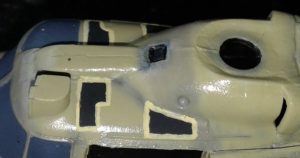 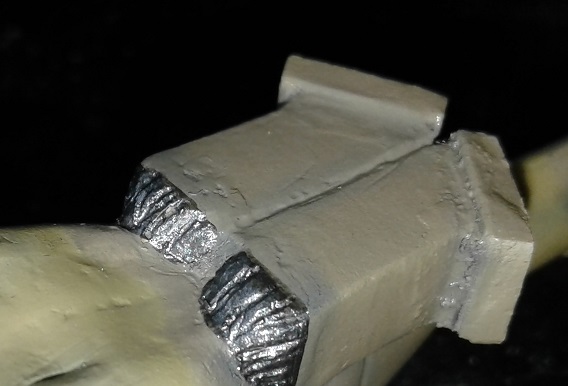 Step 9: I took this opportunity to paint some of the smaller details like the flashing light at the top of the tail, and the front grills of the exhaust system.
– Flashing light Vallejo Model Color 70.947 (Red)
– Grills Vallejo Model Color 70.865 (Oily Steel)
Then I coated the grills at the front of the exhaust box with Vallejo Game Color 73.201 (Black Wash).

Step 11: Helicopters are dirty animals, so I added some random streaks of Vallejo Engine 73.817 (Petrol Spills) to simulate various types of grime running down the fuselage.

Step 12: I then applied a second all over gloss varnish, then coated the model with an enamel was, in this case Tamiya Panel Line Accent Color (Dark Brown). After allowing the enamel to set for around 24 hours I whiped most of the enamel off with white spirits, an old paint brush and cotton buds, leaving only recessed details on the model dark brown, to add depth paint.

Step 13: I then started to add the final touches to the model. I started with the BGM 71 TOW ATGM launchers, which I painted Vallejo Model Air 71.251 (NATO Black) on the launcher racks, and Vallejo Model Color 70.887 (US Olive Drab) on the missile tubes. At this point I departed from the inspiration photos that I had been using, by adding a crew chief figure and M60D door mounted MGs from the UH-1 Iroquois (Huey) kit. Being as this aircraft is supposed to represent one taking part in the notional 1985 conflict I decided that the crew had scrounged a couple of MGs and pintles from ‘in-theatre’ then mounted them to the already existing weapon fairings in order to provide some local defensive firepower against light ground threats. I then painted the crew chief in ‘desert DPM’, using the following colours. 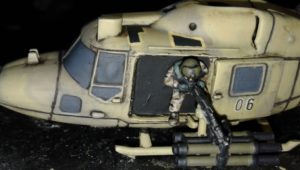 So that’s my air support and armour sorted, all that’s left is my infantry in Desert DPMs. Coming right up…