All my figures are painted with the Vallejo range of paints. These are my personal suggestions only so please treat them as a guide and not “gospel”. I’ve also refrained from my usual technique of adding a little Deck Tan VP986 to the basic uniform colour and drybrushing highlights so you can see the actual colour more clearly. The M1942 Uniform
The first combat uniform issued to US Airborne troopers, the M1942, was purpose designed for Airborne troops by Maj. William Yarborough (who was also the designer of the US Airborne parachute wings). The design included features such as pockets cut on the diagonal to allow easy access while wearing webbing equipment and large, expanding, bellows style leg pockets that became a trademark of the wartime US airborne trooper. The M1942 uniform was used only by Paratroopers and wasn’t issued to Glider troops. The Paratroopers taking part in combat jumps in North Africa, Sicily, Italy and Normandy wore this uniform and even one battalion that jumped during “Market Garden” in Holland was still wearing this uniform.

This uniform was made from light cotton that was a pale greenish-tan colour and I must admit to spending an awful lot of time experimenting to achieve, what I hope to be, the closest match possible. I try to avoid mixing different colours to achieve my basic uniforms but this uniform seems to bring on my OCD (Obsesive Colour Disorder) to get it closer than just plain Olive Drab (887 gets).  The Olive Drab (887) is close but a bit too dark for my taste so, eventually, I settled on a 50/50 mix of Khaki (988) and the Olive Drab (887)

The other colours I chose are:

The M1942 uniform was practical to wear in combat when it was warm but it offered no protection from the elements when the weather turned nasty. Also, being made from lightweight cotton, the knees and elbows tended to wear out quickly so many an airborne trooper bribed his unit parachute rigger to sew patches over the elbows and knees. The material commonly used for this was cotton duck from old parachute packs and was green in colour. I’ve painted patches on the elbows and knees of this figure over an otherwise standard M1942 uniform with US Dark green (893). You could even mix these with “unpatched” troopers for a bit of variety. The Glidermen
The Glider borne troops were basically standard infantrymen who woke up one day to find themselves called Glidermen, there were no calls for volunteers here! With a job equally as dangerous as their Paratrooper brothers they were denied the extra “jump pay” until just prior to the “Market Garden” landings when, finally, they achieved official recognition of the hazardous nature of their job. The uniform worn by these intrepid airborne soldiers was almost exactly the same as the “leg infantryman”. The only allowance for airborne duties was the issue of jump boots to a few fortunate troopers and, other than those few, they are the same as an ordinary infantryman in the M1941 uniform.
The colours I chose are:

The M1943 Uniform
After the US Airborne forces were withdrawn from Normandy they were refitted and brought back up to strength ready for the next mission. This included the widespread issue of the brand new M1943 olive drab uniform to the veterans of the 82nd and 101st divisions. This wasn’t just a paratroop uniform but the beginning of the US Army’s push to standardize the combat uniform. All airborne units received the M1943 uniform, even the Glider troops, but the paratroopers were quick to modify theirs by adding bigger
leg pockets. 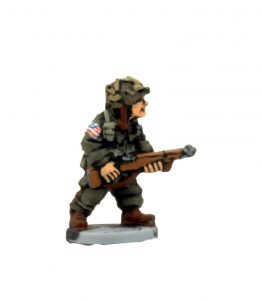 uniform seen dropping from the sky, or climbing out of a glider, during “Market Garden” in Holland and
“Varsity” over the Rhine and into Germany proper.
This figure is painted as wearing the new M1943 olive drab uniform. The uniform colour I used is US Dark Green (893). The rest is the same as for the earlier paratroop uniform colours details. For all the airborne equipment, like mortars and bazookas etc. US Olive Drab (887) as the US Army used pretty much the same colour of Olive drab on everything.

I hope I’ve given you enough to help get you started on painting your airborne force and also a feel for the kind of troops that you’ll be leading, I’m sure, to tabletop success whether from the sky or as elite “leg infantry” with a bit of Armour in support.