Nothing seems to cause as much confusion as colours of the uniforms worn by the United States Army during WWII. And this seems to be mainly due to the fact that the army entered the war in December 1941 wearing one uniform and finished the war in 1945 with another uniform, mixed them up in between, with a few other articles of clothing thrown in for good measure!

In this article I will attempt to portray these uniforms with pictures of BF miniatures painted with Vallejo’s Acrylics colours that I’ve personally chosen. So please treat all colour suggestions as a guide and not a decree. Also, I’ve purposely avoided one step in the painting process that I
normally use which is highlighting of the base colour. This is so you can see the original colour from the bottle and not just the highlighting I use,
which is add 10-15% VP Deck Tan (986) to the original base colour. For those that don’t use the

Vallejo range just cross-reference the
colours on the FOW colour chart to get your favourite paint brand equivalent. Throughout this article I’m going to use the designations that seem to be most commonly used to describe the uniforms and not necessarily the ‘official’ nomenclature.
7 December 1941. The United States is dragged forcibly into the war and the first US soldiers to see combat in the ETO, or ‘European Theatre of Operations’, land in Tunisia on 8 November 1942 during Operation Torch. 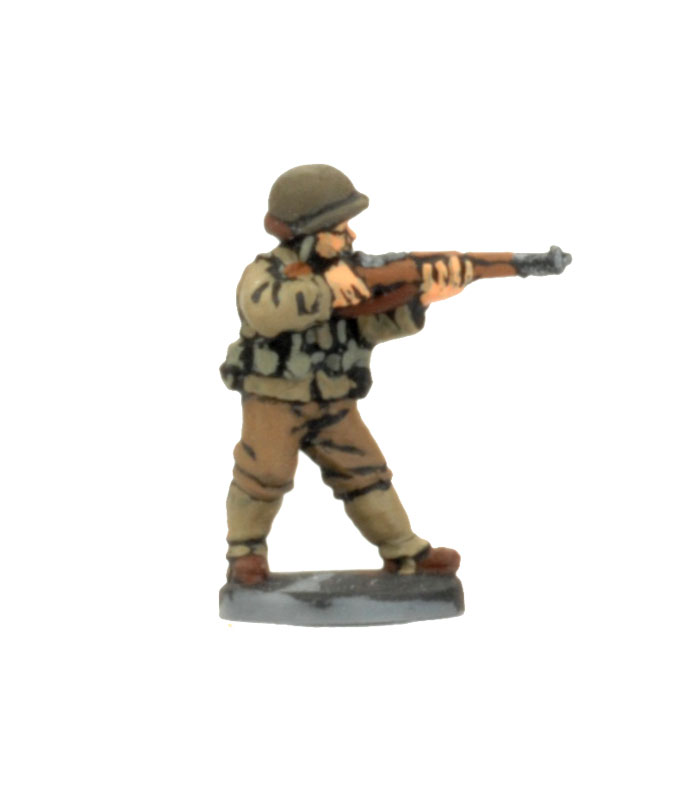 This figure is shown
wearing the M1941 or ‘Parsons’ jacket and Olive Drab woolen trousers with canvas leggings and M1 steel helmet. The G.I. in this uniform could be found in the Bocage hedgerows of Normandy to the snow-covered Ardennes, from the dusty Tunisian roads to the hills of Italy and anywhere else that a G.I. fought in the ETO.

One uniform Item that can cause confusion is the HBT or ‘Herringbone Twill’ denim fatigue that the US Army issued. These were worn as working clothes during training etc. but were also worn over the top of the normal combat dress for amphibious operations such as the Tunisian
and Normandy landings. The olive green colour of the HBT’s was similar to the colour of the later M1943 uniform, which we’ll look at later. 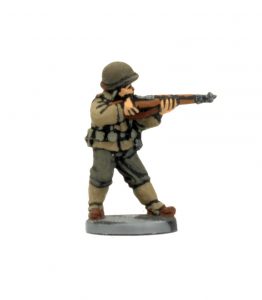 These two figures (Above and left) show a mixture of HBT shirt and trousers mixed with the OD woolen trousers and M1941 jacket. Again, this would be a common mix anywhere the G.I. fought.

(Note. To differentiate between HBT and the M1943 uniform I’d suggest adding more Deck Tan to the highlight colour for the HBT material)

To add to the figure with the Herringbone twill trouser choice is the additional items issued for the Normandy landings. These consisted of the Assault jacket, worn over the normal jacket, and the waterproof gasmask bag. The Assault jackets had extra pockets for things like grenades
and ammo magazines that wouldn’t hinder the troops onto the beaches . The Gasmask bags, well just because, who knew what the Germans would do under such pressure? 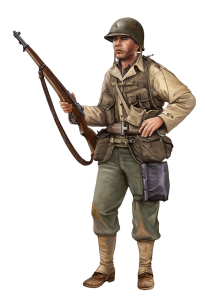 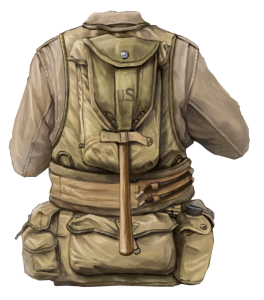 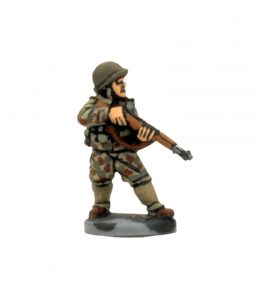 Camouflage uniforms were issued for a select few units in the ETO, mainly some units of 2nd ID, 30th ID and 2nd AD in the Normandy battle. The experiment was short-lived due to the similarity with the German camouflage uniforms, and some ‘friendly fire’ incidents took place as
a result of the confusion. But this does make for an interesting looking G.I.
This camouflage uniform was basically the HBT uniform printed in a camouflage pattern.

A trick I’ve learnt with camouflage uniform painting is once you’ve finished the pattern then go over the whole figure with a light dry brush of the original base colour. This should help blend in the pattern and prevent it from being to ‘loud’. The M1943 uniform. This uniform is what usually springs to mind when thinking of the classic image of the wartime G.I. It was the end result of U.S. Army research and testing to develop a purpose made combat uniform that could be worn anywhere, anytime. The guiding principal was the ‘layered approach’ where you start with the basic uniform of Shirt and trousers then added jackets, liners, hoods etc to suit as the weather got colder or wetter. This uniform, with a few modifications, has evolved into the current uniform worn by the U.S. military and many other countries today.

The first issue was to the G.I.’s taking part in the Anzio landings in Italy and the new uniform proved itself an immediate success. Due to internal squabbling however, between the ETO command and the U.S. based command the issue of this much improved uniform was delayed until pretty much the end of the war for the troops already serving there. Most new troop formations that were shipped to the ETO after mid 1944 were wearing the new uniform but the rest had to soldier on through one of Europe’s worst winters wearing the older and less weather resistant uniform. With the new uniform also came ‘Shoe Pac’ which were an attempt to make the G.I.’s boots waterproof. They were a rubber and canvas overshoe that slipped over the boot and had metal clips to tighten. They were black in colour. 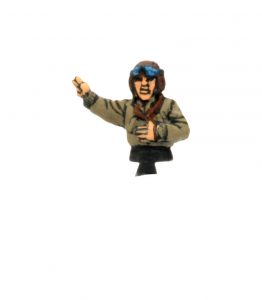 Tank crews had their own specialist uniforms issued to suit their requirements, namely bouncing around inside a tank! The most obvious symbols of the Tanker are the Windcheater jacket, which was highly sought after by all G.I.’s, and the M1942 Armoured forces Helmet. This Tank crewman has a windcheater jacket and a Tankers helmet.

The standard U.S helmet became popular with tank crews as the M1942 Tankers helmet offered no ballistic protection whatsoever. Also as the M1943 uniform became available Tankers were issued it as well.

Contrary to popular belief, if you’ve chosen an American force, you have a wide selection of paint schemes to choose from. Be it a ‘Gypsy’ mixture for a veteran unit or ‘uniform’ appearance for a freshly landed bunch of Greenhorns enjoy your painting and gaming.