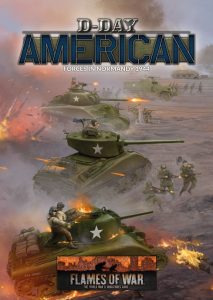 The D-Day landings were the biggest undertaking of the US Army to that point in the war. The US Army was huge, but most of its divisions were totally inexperienced. Only a handful of divisions had taken part in the fighting in North Africa, and most of those were still engaged in Italy. To offset this inexperience, they had raised elite assault troops, such as paratroopers and rangers, reorganised their regular troops for assault landings, and brought experienced veteran divisions back from the Mediterranean.

How Do the Americans Play?

The Americans have three basic varieties of troops in D-Day: American. You can field elite paratroopers and rangers, regular troops fresh into battle, or experienced veterans. Each of these has a different play style.

The elite paratroopers of the parachute rifle company are a new experience for American players. They are some of the best infantry in the game, being rated as Fearless, Veteran, and Careful. On their own, they need to be aggressive as they don’t have the long-range firepower to stop the enemy from sitting back and picking them off, but used this way they can be hard to stop. Given tank-destroyer and artillery backup, they also make excellent defensive troops, so you can swing either way.

The other elite option, the rangers, are more assault oriented, being Aggressive, so easier to hit, and rallying and hitting in assaults on 2+. If you sit around, you’ll get shot to pieces, but if you go for it, the rangers are hard to stop without killing every last one of them! 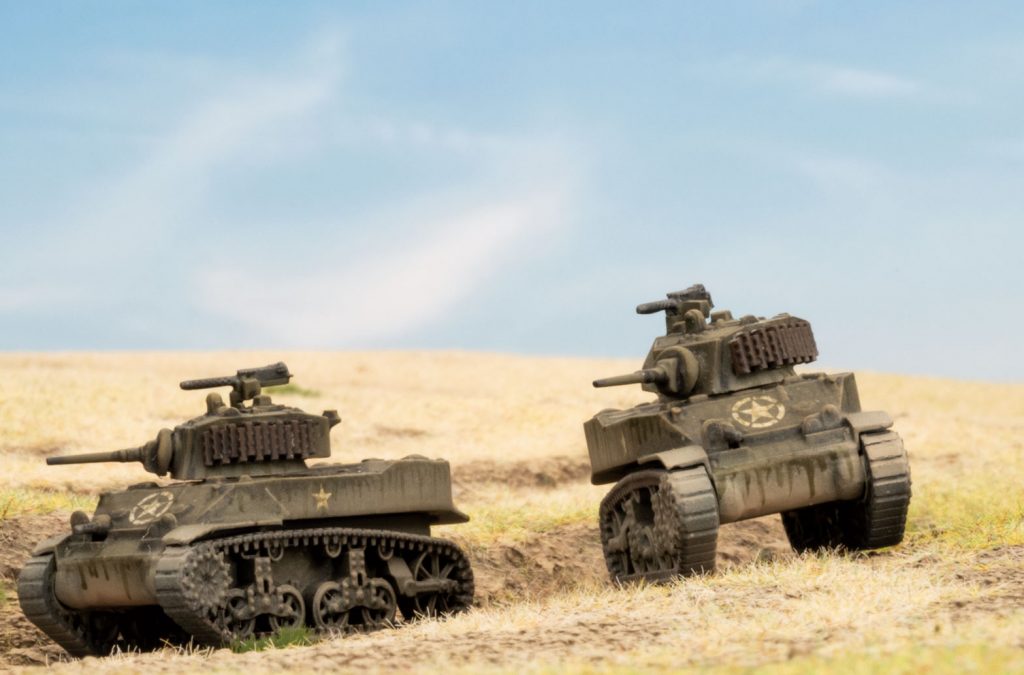 The regular troops are well trained and eager for battle, although still lacking in actual combat experience to polish off the rough edges and teach them the difference between training and life-or-death battle. Most are rated as Confident, Trained, and Aggressive. Their eagerness shows in their ‘Blood and Guts’ approach to warfare which gives their tanks a better Last Stand rating and their infantry a better Rally rating. Once again, they usually need to take a fairly aggressive stance to prevent more skilful enemies massing firepower against them, although rifle companies can often mass enough firepower of their own to turn the tables.

The veteran formations have learned what works and what doesn’t, so are rated as Careful, making them harder to hit, and have ‘Yankee Ingenuity’ pushing their tactics up to 3+. Of course, they’re no longer so ‘Blood and Gusts’ as the green guys.  Their skill allows them to match the best, but they are more expensive in points, so your force is smaller, so tactics need to be more cautious.

The American strategy can be summarized in the phrase mobile tactics. They win by using their mobility, their ability to fire on the move, and their numbers to outflank their opponents and keep them off balance, while applying massed firepower to overwhelm any opposition. D-Day: American includes three new missions and a linked campaign. The first mission is Shot in the Dark, an airborne assault gone wrong with the attackers scattered across the board (and possibly off it) while the defenders attempt to organise a defence in the dark before the attackers reform and overwhelm them. It uses simple rules to reflect the chaos and uncertainty of airborne assaults.

The second mission is Help Is On Its Way, a refight of the Rangers’ battle at Pointe du Hoc. This mission uses the amphibious assault rules to bring the attacking forces ashore. A shortage of landing craft forces the attackers to land in multiple waves, which tanks to the attacker’s Overwhelming Force rule may include units from previous waves that have already been destroyed. The defenders have bunkers, nests, minefields, and barbed wire to delay the attack, while both sides hope desperately for assistance from a rescue force coming from inland.

The third mission is FUBAR (an acronym for Fouled Up Beyond All Recognition) which allows you to refight the bloody battles on Omaha Beach. This uses the same amphibious assault rules, but is a much more straightforward frontal assault into heavy defences with victory being determined by how fast, or even if, the American player can capture their objectives.

These three missions are linked together with two standard missions from the rulebook in a simple campaign where the outcome of one battle has an effect on the next. If the American player can make their final breakthrough in the fifth mission, they win the campaign.

Norman ‘Dutch’ Cota, famous for leading his troops off Omaha Beach, showing them how an assault should be done, allows infantry under his command to attempt to charge again if they are driven back by defensive fire.

Lafayette Poole, America’s most successful tank ace, is ideal for leading your tanks’ advance. His men will follow him as he dashes forward, then when he gets close, his accuracy while firing on the move us unparalleled.

Turner Turnbull’s paratroopers refused to give up ground, no matter how many times the Germans attacked. His platoon’s defensive fire is virtually impenetrable.

The command cards introduce a new concept, title cards. These cards have the title of a division and a special rule giving the division’s flavour. The key is that you can only have one title in your force.

Title command cards for D-Day: American give you the option to field twelve new infantry divisions in addition to the two in the book. These allow you to customise your rifle company force to fight in many different ways. Some divisions give you new equipment, such as SMG-armed assault groups or M7 Priest assault guns as far of the formation. Others give your troops new abilities like attacking at night, riding tanks, navigating reserves to where they are needed, and improved artillery support. Most of the title cards give your division a different focus, trading out the ‘Blood and Guts’ rally bonus of the ‘yankee Ingenuity’ tactics bonus for other advantages. Your tankers and armoured infantry aren’t left out, gaining the option to be the Free French ‘Division leClerc’, determined to liberate France or die trying. If they want to stay good ol’ boys from the US of A, they get lots of interesting equipment for their Sherman tanks: DD amphibious gear, Cullins hedgerow cutters, tank telephones, and sandbag armour.

The Americans are known for their love of fire support, and the command cards don’t disappoint, giving naval gunfire support, heavy mortars, air superiority, and new weapons loads for your P47 Thunderbolts including napalm and really big bombs!

If all this firepower seems to blunt to you, you can get all sneaky with the French resistance. They can mess with your enemy’s reserves or fight alongside you on the battlefield! And, when everything else fails, there’s always luck, with the Lucky card giving you a re-roll at the critical moment.